Between the 80s and now, the world of media has advanced in a way that is hard to comprehend.

Cassettes have now become a nostalgic symbol of a different time.

You may be more with the current times and do not have a use for the cassette tapes lying around your house.

Determining how to dispose of cassette tapes will depend on your own interests and availability, but there are multiple methods you can choose from.

Can You Toss Them in the Bin?

Theoretically, yes, you could. However, with hundreds of millions of cassette tapes globally, it has added up and been a problem for landfills.

In fact, it can take nearly 450 years for plastic to decompose in a landfill fully.

With so many options of disposing of cassette tapes in a useful way, why not choose a better route?

How to Dispose of Cassette Tapes

Recycle Them at Businesses That Accept Cassette tapes

Unfortunately, you cannot just toss them in your recycling bin, and most local recycling centers will not accept them.

Although cassette tapes are made of plastic, some of the plastic within them is made of unrecyclable plastics. Furthermore, they are coated with toxic metals, such as chromium.

While you cannot toss them in a recycling bin, you can easily drop them off or mail them to businesses such as Green Citizen.

They offer mail-in electronic recycling and will ensure that your items are recycled ethically. Keep in mind that if you utilize a service to recycle your tapes, you may have to pay some fees.

For eco-conscious individuals, it may be worth it knowing your electronics will not contribute to e-waste.

Sell Online or at Garage Sale

Believe it or not, thousands of people still love listening to their old cassette tapes and/or collecting new ones.

While you may not make millions on them, you could reduce the clutter in your house while making some extra cash.

With that being said, certain cassette tapes with bigger named artists may be worth more. Before setting a price, see what other people are selling theirs for.

As the world of music has upgraded, so has the world of shopping. Now, you can easily list the items in your home that are taking up space and turn them into some extra money.

All you need to do is list them online, find a buyer, and have them delivered to their home. Whether you want to sell them individually, as a bundle, or a combination of both is up to you.

Where to sell cassette tapes online:

Have a Garage Sale

If you are looking to dispose of old cassette tapes, maybe there are other things you would like to get rid of.

Many people who have cassette tapes probably have old VHS tapes, CDs, and other forms of media that take up space.

In this case, the benefit of a garage sale would be the ability to package up all of the nostalgia in one box.

For those who love collecting old-fashioned media, this would be a great deal for both parties.

Sell to a Business

It may be surprising that any business in the 21st century would want a box of old cassette tapes.

It may be a bit more challenging to find a business that has use for them in this day and age.

However, there are a few out there. Look for vintage stores, as they are most likely to take in nostalgic items like cassette tapes and VHS tapes.

If you would rather not take the time to post them online or host a garage sale, donating cassette tapes is always an option.

While you won’t make any money from the cassette tapes that are sold, you have the benefit of saving time as you make room in your home.

Places such as Goodwill take in just about anything you can find around your home. Even if they aren’t in perfect condition, some people may want to utilize them for crafts or display them.

The saying “one man’s trash is another man’s treasure” rings true, especially when it comes to anything nostalgic.

Donate to a Library

Libraries cater to people of all ages. Many of the older population long for the days before everything became so modernized.

While not every library will be interested or even have them, it may be worth asking around.

Repurposing old items and turning them into brand new works of art has been a craze in recent years.

With more people attempting to be more green, there are plenty of tutorials and ideas out there you may not have considered.

If your walls could use a little more character, why not create a display of all of the display tapes you grew up listening to?

Purchase some shelves suited for the size of the small tapes and arrange them alphabetically, by color, genre, or however you’d prefer.

If you like, another option would be to add spray paint. By using spray paint, you can personalize your wall decor to be whatever color you like.

Other ideas for a wall display:

You could also simply add them as small pieces of decoration to the shelving you already have.

There are even Etsy shops and other markets where the look of cassette tapes is recreated into home decor, so why not use what you already have?

Collecting plants has been a huge trend in recent years. Pots and planters can be pricey, so why not use what you already have?

Depending on the number of cassette tapes you own, you can make your planter as small or big as you like.

Glue four cassette tapes together if you want something small, such as a small succulent planter.

Translucent cassette tapes wired together could create a unique and charming lampshade. All you’ll need to craft it together are your tapes and some plastic sheeting to hold them together.

Similar to the process of using cassette tapes to create planters, you could make boxes instead. Rather than adding plants to the inside, you could use them for a retro piece of storage.

Glue the cassette tapes to a cardboard box, and voila, you have a vintage storage container.

You can keep the look off the cassette tapes or use spray paint to make your box a color that matches your home’s aesthetic.

If you are someone who loves a vintage accessory, you can easily take your favorite old cassette tapes and transform them into an iconic coin purse or small wallet.

You can find detailed instructions by reading this article.

Times are constantly changing, and sometimes it feels like enjoying simple pleasures is a thing of the past.

Reliving some of your favorite moments by popping your tapes into a cassette player may bring back memories and give you that good nostalgic feeling.

Before you get rid of all of your cassette tapes, see if you can digitize them first.

Even if you decide not to keep them, you can have your favorite songs available forever.

All you need is a cassette tape converter, which can be found at places like Amazon or Best Buy.

Hold Onto Them For the Future

Even if cassettes aren’t something that is popular now, they may be in the future as a collector’s item.

Take a look at record players, for example.

In fact, some are speculating that cassette tapes are making a comeback already.

When you think of cassette tapes, you may view them as an outdated item with no use in the 21st century.

However, many people can find use out of cassette tapes that you may not have considered.

By selling or donating them, you can reduce landfill waste while giving someone something they can enjoy.

Consider a crafting project if you like the look of cassette tapes but aren’t sure what to do with them. Create unique wall art, planters, storage boxes, lampshades, and more.

Even if you started this article wondering how to dispose of cassette tapes, you might decide to simply keep them for the memories. 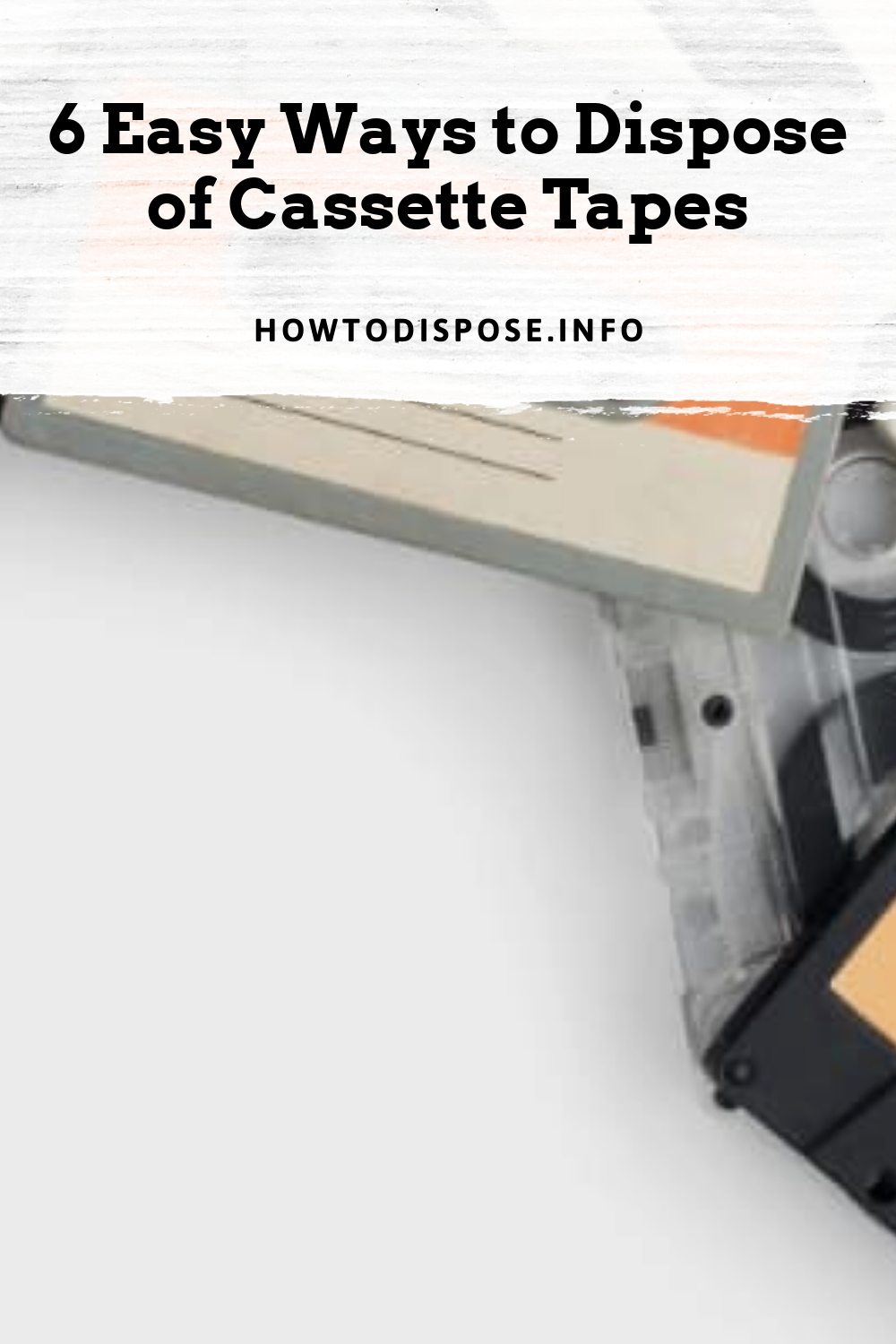