Latex gloves are essential items in hospitals, clinics, bakeries, restaurants, and other fields where contamination is possible.

Latex gloves are made for single-use, but many people often wash and reuse them to make them last longer.

If you reuse your latex gloves, you might be interested to know if latex gloves are recyclable.

It’s best to know the answer to this question so that you can ensure you aren’t causing yourself any problems.

Is Latex Plastic or Rubber?

Latex gloves may feel like plastic, but they’re actually rubber. Latex is made using natural components that are all plant-based.

Latex is a natural rubber that’s made from oil derived from the rubber tree.

Latex is biodegradable, which means you don’t have to worry about harming the environment by using latex gloves.

If you ask us if latex gloves are better than PVC gloves, we would definitely say yes!

The production of plastic produces a lot of pollution. Plastic isn’t biodegradable either. All the PVC gloves you discard will stay around and harm the environment for years.

However, the production process of latex produces only a negligible amount of pollution. Latex is biodegradable, too, making them a much more eco-friendly option than plastic.

So, if you’ve got to choose between latex gloves and PVC gloves, always make a responsible choice and opt for latex gloves.

Being a responsible individual, you might be concerned about how you may be harming the environment.

If your job requires you to wear latex gloves, you might be reusing your latex gloves, thinking that you’re doing the environment a favor by not contributing to the waste load on the landfills.

While you intend to do just that, you’re putting yourself and others around you at the risk of getting sick.

Latex gloves are not recyclable, and they shouldn’t be reused. Latex gloves should be discarded after a single use because they’re designed to be!

Used latex gloves are dirty, to say the least.

They’re contaminated with dirt and pathogens that could harm you and others around you, and also contaminate surfaces you touch while wearing gloves.

Why Are Latex Gloves Not Recycled?

In these times when recycling all you can is highly encouraged, why is it that latex gloves aren’t recycled, and nobody even recommends you recycle them?

Well, the purpose of recycling is:

As far as latex gloves are concerned, there are numerous reasons they aren’t recycled and won’t be recycled in the future.

One of the primary reasons why recycling is recommended and encouraged around the world is to reduce waste production.

Everything that’s not recycled ends up in landfills and stays around for quite some time.

However, that’s not the case with latex. Latex is eco-friendly. It’s biodegradable. So, it doesn’t really matter how much latex ends up in the landfills. It poses no harm to the environment.

Latex gloves are used in all fields where there are chances of contamination. These gloves are worn to protect oneself from getting the hands dirty from whatever they’re working with.

If you work at a hospital, your latex gloves will be contaminated with viruses and bacteria. If you work at a restaurant, your gloves may be dirty from handling all the food.

If these gloves are recycled, the recycling facilities will have to put in a lot of effort to rid the latex of all sorts of contamination.

Not to mention the effort that would go into ensuring the recycling equipment doesn’t get contaminated.

All of these factors are good enough reasons why latex gloves aren’t recycled.

Instead of recycling something that has a minimal impact on the environment, you should try to invest your efforts and resources into recycling things that pose a threat, like plastic.

The risk is higher if you try to reuse them!

Why Shouldn’t You Reuse Latex Gloves?

You might already be considering reusing your latex gloves since they can’t be recycled. But we hate to disappoint you, that’s not an option either.

If we’re encouraging you to dispose of latex gloves instead of trying to reuse them, there are some pretty strong reasons for it.

If you’re a healthcare professional, you’re required to wear gloves. Gloves protect you from getting in contact with blood, bodily fluids, strong drugs, and of course, pathogenic microbes.

The gloves serve as a barrier between your skin and the contaminants. This means your glove will be laden with everything you’re protecting yourself from.

If you don’t discard your latex gloves, you’ll contaminate every surface and every person you touch.

Even if you wash your latex gloves before reusing them, there’s no chance that simple washing can remove all the germs that are present on your gloves.

If you’re someone who’s involved in dispensing medicines or weighing out raw materials for the production of pharmaceutical products or edibles, your latex gloves can be a source of cross-contamination.

If you reuse your latex gloves, you’ll end up contaminating one material with the other. While it wouldn’t matter a lot in the case of foods, it could change everything if it’s drugs you’re involved with.

Also, if you work in a restaurant kitchen, your gloves may be a source of cross-contamination. Let’s say you wash meat wearing your gloves.

When you mix food or cut vegetables wearing the same gloves, you’re contaminating them with the germs that were present on the meat.

For these reasons, you should never reuse your latex gloves. They’re single-use products, and that’s exactly how you should use them.

What to Do with Used Latex Gloves?

We always recommend recycling anything that you no longer use. We never encourage dumping everything in the waste.

Unfortunately, that’s not the case with latex gloves. Since latex gloves can’t be recycled and reused, the only option that you’ve got is to dump them into the trash.

If you reach out to any recycling facility to have your latex gloves recycled, you’ll be disappointed because they won’t accept latex gloves.

If any recycling company does accept latex gloves and asks you to pay for their services, know that you’re being scammed. Latex gloves can’t be recycled, and they’ll only end up in landfills.

Yes. Latex gloves are biodegradable, which is why we say it’s alright to discard them in the trash.

Latex gloves are made from plant-based natural substances, which make them biodegradable. Having said that, latex gloves won’t deteriorate in days or weeks.

It can take up to 5 years for latex gloves to completely degrade and become a part of the environment.

If it rains or floods before the latex gloves are degraded, they may contaminate the water and harm marine life.

Remember that latex gloves aren’t 100% natural. Some toxic chemicals go into the making of latex gloves.

This also puts animals at risk. If an animal eats latex gloves, it can have serious consequences.

But despite all the possible risks, your best bet is to dump latex gloves in the trash and let them end up in the landfills because they can’t be recycled, and they shouldn’t be reused.

Can You Discard Latex Gloves in Compost Waste?

You can most definitely discard latex gloves in your compost bin. Latex gloves are made from natural, biodegradable materials, and they’ll break down after a while.

Once they break down in the compost heap, they can be used as fertilizer for your garden plants and crops.

However, one thing that you must keep in mind is that the latex gloves you’re discarding are contaminated with germs and pathogenic microorganisms.

Throwing these diseased gloves in the compost heap means the pathogenic microorganisms may grow further. They may even spread across your plants.

While the impact will only be minimal, it’s up to you whether you want to take that sort of risk.

Sometimes, trying to be creative with everything isn’t a wise thing to do.

While your intention is good and pure, and you’re trying to reduce your waste contribution, you shouldn’t try reusing latex gloves.

Latex gloves are contaminated with elements you’re seeking protection from, and if you continue to use them, you’re spreading these harmful elements everywhere.

Ideally, you should replace your latex gloves every 4 to 6 hours. Yes, that would mean a lot of latex gloves will end up in the waste, but that’s okay. 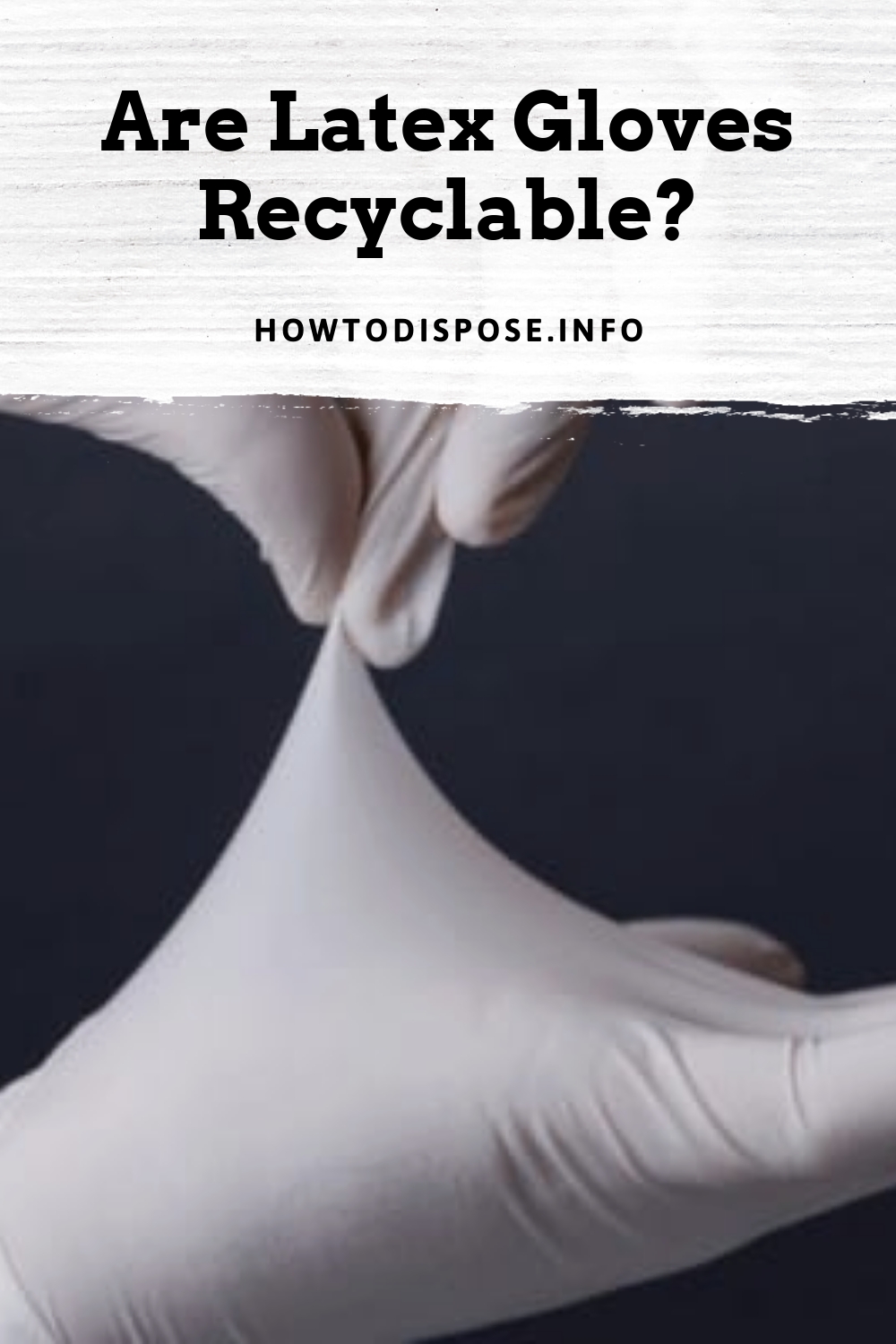