Fire safety is a big concern for everyone. That’s probably why people have smoke alarms installed everywhere and always keep a fire extinguisher nearby.

However, there is one fire hazard that many people often overlook, and that is matches.

You might think they are just garbage once you have used them, but contrary to popular belief, that is not entirely the case.

If not disposed of properly, matches, even used ones, can pose a serious fire hazard that could get you in a lot of trouble.

Therefore, keep reading to find out the right way to dispose of matches.

How to Dispose of Matches Properly

For starters, once you have used them, make sure you blow them out completely and don’t just leave it smoldering.

Then, when you are ready to throw them out, soak them in cold water for a few minutes first. Doing so makes the matches lose their ability to light a fire.

As a result, they are safe to throw out. So, after that, you can simply throw the soaked matches in the garbage bin like your other trash without worrying about starting a fire.

Why Is It Important to Dispose of Them Properly?

Once you have used them, matches seem like pretty harmless objects. That’s why most people just blow them out and chuck them in their garbage can.

However, this can be quite dangerous because the head of the matchstick could rub against any rough surface and light up again.

This results in a fire starting in your garbage can, which then grows even more as the fire consumes the other trash in the bin.

This is pretty scary on its own but imagine if this happens inside your kitchen or home and not just out by the curb.

A sudden fire and an intense situation can leave a lot of people paralyzed, which only makes the whole situation a lot worse.

A fire can spread throughout a house pretty quickly if you don’t do something about it right away.

So, to sum it all up, a single match can start a fire in your garbage bin that can spread throughout your house in a matter of minutes.

How to Store Unused Matches

Learning to store matches correctly is as important as learning how to dispose of them correctly.

Matches are a common household item found everywhere. While we do have lighters around as well, matches continue to be widely used.

This makes it super important to learn how to store them the right way, especially if you have young children in the house. We all know children can be extremely curious, and they love poking their noses everywhere.

All they need is to see you using it once, and they will be able to replicate the behavior and start a fire on their own. Even if they do not witness you doing it, they can figure it out themselves or get unlucky and start a fire unintentionally.

Therefore, lighters and matches need to be stored away from toddlers and even school-age children at all times. Place them somewhere high and out of reach of children, such as in cabinets. If possible, lock them as well so that there’s absolutely no way of getting to them.

Moreover, matches don’t really come with an expiration date. All you need to is to keep them in a cool and dry place, as water can make them useless, as mentioned earlier.

Fires can be quite scary and cause a lot of destruction in a very short time. That’s why you need to prevent fires in your home at all costs.

You already know how to deal with matches, but here are other fire safety tips you need at home.

Installing smoke alarms in the house is one of the most basic fire safety tips to practice at home, and a lot of people do it as well.

However, the problem is that they don’t install them in the right places or more importantly, don’t maintain them.

Just like any other electronic device, smoke alarms can break down, and if you don’t repair it, it just becomes a useless white box in your house. Therefore, install smoke alarms on every level of your house and outside every sleeping room.

Moreover, test the alarms every six months or so to ensure they are in working order. If they are broken, get them replaced or repaired right away.

If you have people in the house with hearing-disabilities, consider getting a smoke alarm that produces flashing lights along with some sound.

Have an Escape Plan

Fire safety does not just involve tips to prevent a fire, but it also deals with tips to safely escape a fire with the least harm. That’s why you need to have a thorough escape plan in case of a fire. Plan how you will exit the house or get away from the fire as quickly and safely as possible.

Keep at least two exits in your plan and practice the whole thing several times till you can do it in your sleep. Make sure everyone in the house is familiar with the plan.

Be Careful of Heating Equipment

Portable heaters can be a lifesaver during winters, but they also pose serious safety risks. These heaters and other similar heating equipment, fireplaces, etc., can easily cause a fire in the house. Therefore, be extra careful when using them.

Don’t leave them unattended or running all night long. Keep your children and pets a safe distance away from the heater at all times. Make sure there isn’t any flammable material near them.

You should try to quit smoking altogether as it is quite harmful to health. However, if you must do it, do it outside. Avoid smoking indoors as much as possible, especially when you’re in bed.

Beds and sheets are highly flammable material, and it’s very easy to fall asleep on them with a lit cigarette in your hand. We don’t need to tell you what happens after that. Whenever you are smoking, make sure you put it out completely and throw it in a safe place where it will not be a fire hazard.

The plugs in your house also present an opportunity to start a fire in the house. Make sure you are not plugging too many things into one socket. This will not only trip the circuit breaker in your house but can also lead to a fire.

Additionally, faulty or worn-out sockets are also a big fire hazard, so get your electrician to check everything right away. Avoid running cords under carpets or furniture as the tiniest spark can lead to a fire.

This is one of the most crucial tips to remember. Do not leave any open flames unattended, whether that’s on your stove, a scented candle, or even the fireplace.

Even if you’re leaving the room for just five minutes, it’s better to blow those fires out rather than risk spreading a fire. Such open fires can easily catch flammable items around them and spread quickly around the house.

It is also crucial to teach your children about fire safety protocol. Children can easily panic and do something dangerous in case of a fire. Talking to them about it and practicing with them can help them be more prepared.

Therefore, besides the escape plan, you need to teach several other fire safety tips as well.

For instance, make them familiar with the smoke alarm sound so that they don’t get frightened by it and know what to do instantly.

Teach them to never hide under their beds or in the closet and follow the escape plan immediately.

Teach them to never open doors if the doorknob feels hot. Additionally, teach them the ‘stop, drop, and roll’ in case their clothes catch fire.

We keep accumulating small things and odd objects in our house without even noticing them.

And then one day, we find loads of objects, like old keys or broken light bulbs, and find ourselves unable to determine what to do with them. Similar is the case with matches.

We keep using them in the kitchen, by the fireplace, or to light our candles, and before we know it, we have a heap of matches just lying around.

Fortunately, now we know exactly how to dispose of them safely as well as store them. 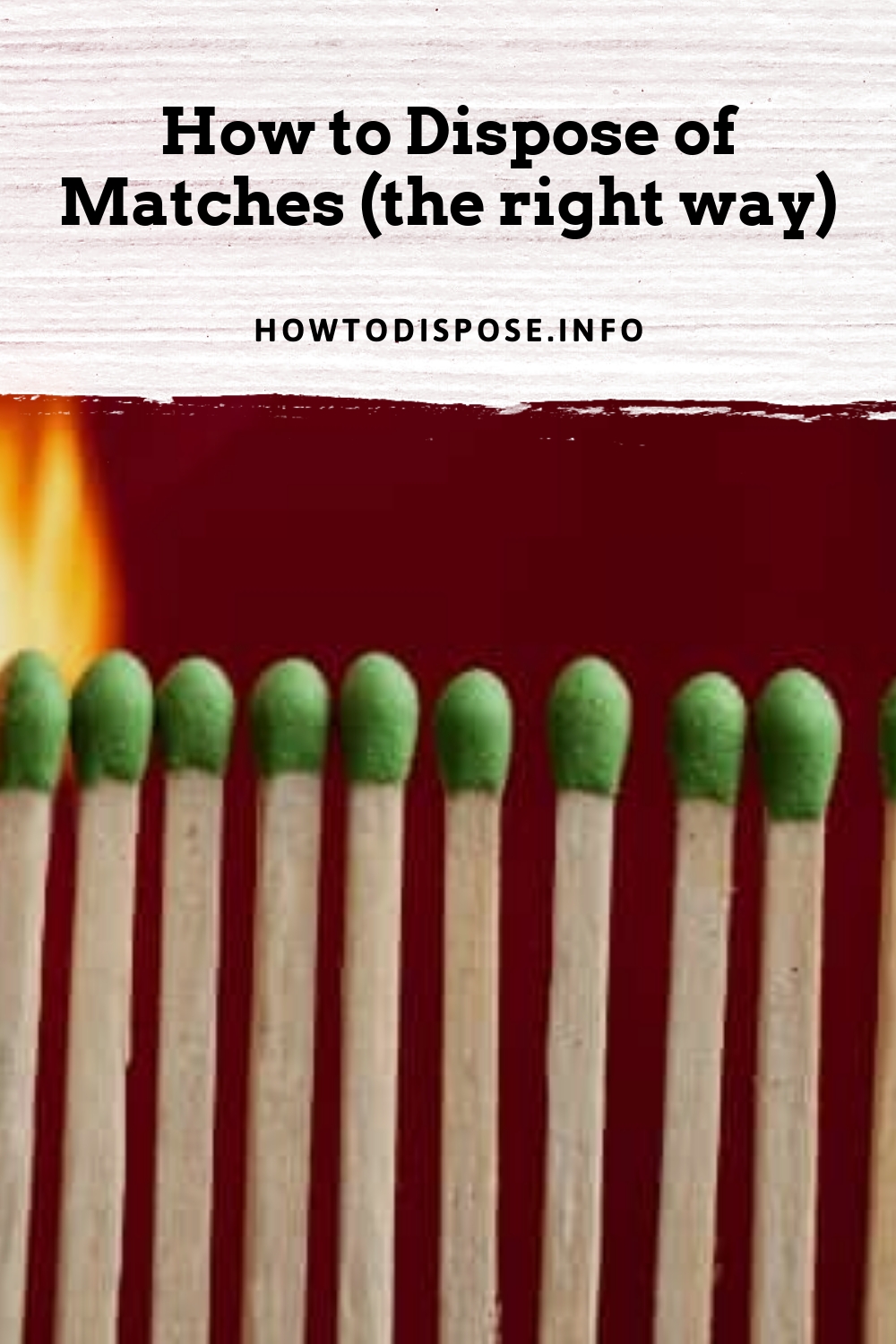