Condoms – the world’s most used contraception – are easy to use and pretty effective for the job they’re supposed to do.

But the real question here is how to dispose of condoms once you’re done?

Disposing of your used condoms is essential because they can be harmful to the environment and can cause health issues for anyone who might come in contact with the condom itself or the contents inside.

Before Disposing Condom, Don’t Forget to Tie the Knot

Before trashing the used condom, don’t forget to tie the top end to stop the contents inside from spilling out.

You can easily do this by pulling on the top half and twisting it around to tie a knot like you would with a balloon.

Trashing a used condom without tying the top end will defeat the purpose of containing your bodily fluid.

As a result, the spillage can be harmful if a child picks it up or if an animal decides to take it in its mouth.

Sometimes, pets like to bring in things they find dumped around, which will obviously be an unwelcoming sight.

2 Common Ways To Dispose Of Condoms

There is no doubt about the fact that a used condom isn’t a pretty sight.

Therefore, let’s dive into understanding a few ways of how to dispose of a used condom properly:

Always Use A Trash Can

Tie the knot and throw the condom in the trash can. This is not a problem at all if you’re at home.

And what if you’re not? Let’s say you find yourself with a used condom in the back of a car, on a yacht, or perhaps a campsite.

It is not okay for you to dispose of a used condom in the ocean, between the campsites, or even on the road.

If you’re not in a place with a trash can, you can save the used condom in an empty soda or beer bottle until you reach a place where you can responsibly dispose of it.

Diaper Genie To The Rescue

If you have a baby, then you know what a Diaper Genie is.

A Diaper Genie is a disposal bin you can use to keep soiled baby pampers. It helps keep out the odor and keep your room/house always smelling fresh.

So, if you’ve got one at home, you can also use it for disposing of used condoms!

What Not To Do When Disposing Of A Condom

Here are a few things to steer clear from when disposing of condoms:

You Just Can’t Toss It Out

It is important to understand that you can’t just toss out a used condom in the trash without some concealing.

To keep the contents inside, wrap it in a tissue or anything else that you might be throwing out with it.

For example, if you’re already throwing out a bag of crisps or an empty box of biscuits, you can simply insert the used condom inside the trash items before tossing it out.

Another reason for concealing the used condom is to save people from having awkward conversations.

If a condom is disposed of in the bin without being wrapped in something, and if it happens to fall out of the garbage shoot, it may attract questions, especially from children who do not know what a condom is.

Therefore, to stop children from assuming it’s a balloon of sorts, it’s better to just wrap it up nicely before throwing it in the bin.

Never Throw A Condom In A Recycle Bin

Recycles bins are specifically made for things and products that can be reused.

You can recycle glass bottles and even old paint containers, but a used condom is where a recycle bin draws the line.

A condom is essentially rubber protection designed for a single-use.

Reusing the same condom twice, even a few minutes apart from the first use, does not guarantee protection.

The chances are high that it may tear and defeat the purpose of using this form of contraception.

Secondly, it doesn’t even need to be said, but for the sake of awareness, a condom is an incredibly personal item.

While using someone else’s toothbrush is heavily frowned upon, reusing a condom is something that can blow someone’s mind – but not in a good way.

Adding a used condom to a recycle bin can spread several diseases and increase health risks for anyone who comes in contact with the items in that particular bin.

Flushing a used condom can seem like a quick solution but can be a very dangerous one.

Even though you will get rid of it pretty quickly, you may end up clogging the pipes and have your bathroom plumbing break down.

Not only will this be an awkward encounter with your plumber, but it will also cause a lot of hassle. Instead, take a bit of time and wrap the used condom properly in a tissue before disposing of it in a trash can.

Even if you read the instructions on the back of condom boxes, the manufacturers highly discourage flushing them in the toilet.

Condoms Don’t Belong In The Water

It is never wise to just throw a used condom in the water if you are at a beach.

The reason behind this is that a condom can float away and wash up on a shore elsewhere. This will litter the beach, but it is also a hazard, especially if a child comes along to pick it up.

Other than this, you would also be harming birds or aquatic animals by sending your trash off into the sea.

If a fish or a bird ingests it, the condom can cause severe health issues as well as death.

Some companies make biodegradable condoms, which are all well and good, but they do not belong in compost bins.

One thing to understand about condoms is that they take a lot of time to break down.

Other than that, they can attract wild and domestic animals that can cause them serious harm if ingested.

In addition, the way condoms are made makes them seriously unsuitable for most composable situations, even though you can add biodegradable condoms to compost.

Even though it is one of the most widely used birth control methods, only a handful of companies create biodegradable condoms that go a little easy on the environment.

Since this product is made for convenience and low cost, most of them are pretty harmful to the environment and take several years to decompose.

The important thing to understand here is that most condoms are made from latex, a biodegradable material.

However, for the condom to be effective in what it’s supposed to do, it is coated with a certain lubricant. This lubricant makes it harder for latex and lambskin condoms to decompose in the earth.

Some companies make eco-friendly and toxin-free condoms to distribute contraception for people to use responsibly.

These condoms do not contain nitrosamine and are also packaged in recyclable paper, making them completely biodegradable.

Female Condoms: Are They The Future?

With the advancements in technology and demand for increased protection, female condoms rose in the market a few years ago.

However, when it comes to being biodegradable, most female condoms do not make the cut.

The above is because female condoms are mostly made from plastic materials that act as an alternative for people who might be sensitive or allergic to latex.

Plastic and polyurethane are non-biodegradable materials as they require petroleum to be manufactured.

Not only are they biodegradable, but they are also a major contributor to global warming.

Hence, female condoms leave behind a large carbon footprint and do not belong in general recycling bins. The best way to dispose of non-biodegradable condoms is to wrap them in tissue paper and throw them in the trash can.

Even though female condoms do not get a high score for biodegradability, they do get some plus points in terms of recycling.

An internal female condom is perhaps the only condom that can be reused.

According to FDA standards, these internal condoms can be washed, dried, and reused up to six to seven times.

It all depends on how much pressure one puts on them, but the minimum yield is definitely more than six times which is five fewer latex condoms used!

Despite their non-biodegradable nature, condoms are safe for the environment if disposed of properly and responsibly.

They serve their primary purpose of acting as birth control and preventing sexually transmitted diseases.

Perhaps, we will come up with a way to create latex condoms that are fully biodegradable someday in the future.

Therefore, it is equally important for every sexually active individual to be responsible for disposing of their condom in a proper manner.

Not only should this be a responsible habit towards the environment, but it should also be part of sexual etiquette among sexually active people.

Other articles you may also find useful: 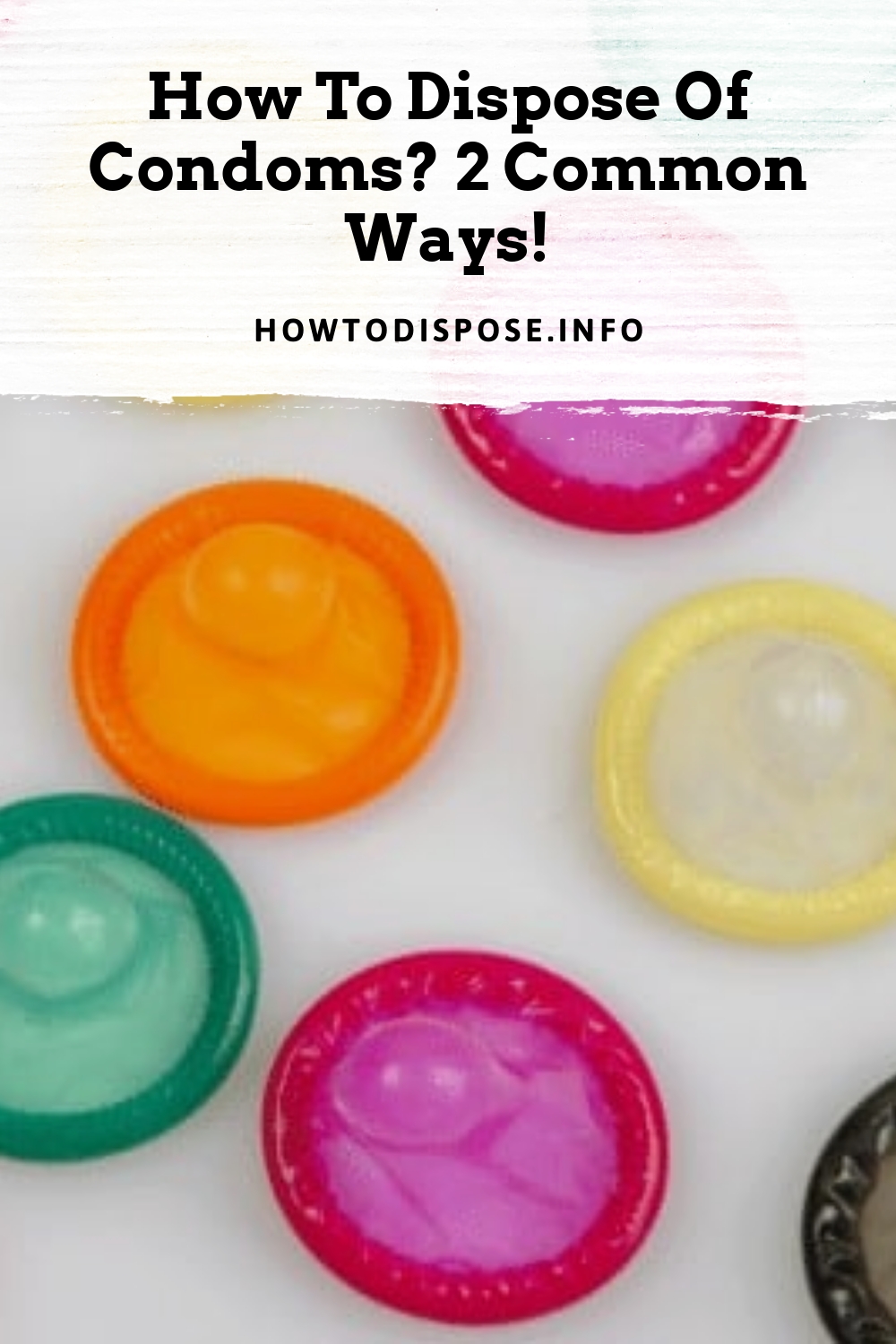