It doesn’t matter if you love squirrels or consider these furry animals a nuisance in your backyard.

Chances are, finding a dead squirrel in your yard isn’t something you want to deal with. If you find yourself in this situation, you may wonder, what should you do with the dead squirrel?

If you find a dead squirrel, what do you do? Do you need to throw it away? Contact the local animal services? Or bury it in the backyard?

While the answer may not be black and white, there is something to keep in mind – don’t touch the dead squirrel with your bare hands.

Be sure you wear protective gloves and dispose of the squirrel in a plastic bag. You should also wash down the area where you found the squirrel to ensure no diseases spread.

Finding any dead animal in your yard can indeed be unpleasant and sometimes even nasty.

Even though the disposal process is straightforward, there are a few things to know and do to ensure no issues arise. Keep reading to learn more about how to dispose of a dead squirrel.

A Word of Warning

When it comes to dead animals, it is essential to be careful and use caution. There’s no way to know how the squirrel died or what diseases it may have.

If you need to dispose of a dead squirrel, make sure you don’t touch it. Touching dead animals can transfer diseases to you or others.

As you dispose of the squirrel, keep it as far away from your body as you can, regardless of the method you choose.

Make sure your children and pets stay away from the dead animal and the area where it died as well.

Why Do Squirrels Die?

The squirrel is a fascinating creature. What surprises some people is that they belong to the same species family as mice and rats.

What does this mean? The squirrel is actually a rodent.

When it comes to a squirrel’s lifespan, it’s essential to understand that it will vary. Some squirrels will live for up to 20 years, which is longer than a dog or cat.

While this is true and somewhat impressive, the squirrel is also a prey animal. As a result, they rarely live this long.

If you find a dead adult squirrel, it’s a safe bet to assume it did not die because of old age. Usually, squirrels that live in the wild and survive past a year will last to about six.

Some are luckier, though. Many wild squirrels even live to age 12, but only if they can avoid predators.

Why You Should Avoid Touching a Dead Squirrel

While squirrels are often cute, they also carry many different diseases. Unfortunately, some of these can be dangerous for people.

Even though only a few diseases may be harmful to you, it is best not to touch a dead squirrel.

One disease that a dead squirrel can transmit is called Tularemia or “rabbit fever.”

The F. tularensis bacteria may linger on the dead animal for several weeks. If you touch it, it can infect you in many ways.

It can get in through abrasions or cuts on your skin. Because of this, it is best to wear gloves when dealing with a dead squirrel.

Causes of Sudden Death in Squirrels

If a squirrel isn’t hurt or killed by predators and can reach year five or more, you may wonder what would cause it to die suddenly. This is a common question.

The fact is, there are a few reasons squirrels may die suddenly.

Now that you know why you may have a dead squirrel in your yard (even though this isn’t a comprehensive list), it’s time to go into the details of getting rid of it.

One more time to ensure you remember – don’t touch the dead squirrel with your bare hands. You don’t know why they are dead.

You should also take steps to ensure your pets, children, and other people don’t go near the dead animal.

Some of the most common methods used to get rid of a dead squirrel in your yard include:

Here’s how to go about each method.

The most natural (and some would say humane) way to dispose of a dead squirrel is to bury it. You can bury it in your yard and let the decomposers in the soil handle the job.

All you need is a shallow grave. You can even have a small funeral (which some kids will demand), which may also help you feel better about the situation.

Just make sure you bury the critter somewhere your pets can’t access it. Again, you don’t know what killed it, and you need to ensure your pets won’t be harmed.

Scoop it Up and Put It in the Trash

If you don’t want to go through the hassle of having a squirrel funeral, it’s best to throw the squirrel away. Here’s how:

Once the bag is fully sealed, you can dispose of the squirrel in the trash.

Can You Throw a Dead Squirrel Away?

You may be wondering if it is legal to throw a dead squirrel in the trash. According to law, It is acceptable to do this.

You just need to ensure you fully seal the plastic bag before throwing it in the garbage can.

It doesn’t matter where you live. It is not illegal to throw away a dead squirrel. The only caveat is to make sure it is placed in a heavy-duty plastic bag first.

Make sure you wash your hands well once the job is done.

Are you wondering who will pick up a dead squirrel? Most local areas have an animal control service that picks up animals on the road, but that’s not in their job description if it is on your property.

While this is true, some sanitation services will handle this for you. It’s a good idea to call around to see what type of dead animal removal services are available in your area.

You can also check with Parks and Recreation in your area. At times, they have roadkill removal services available in certain cities.

Dealing With the Smell

Sometimes, if a dead squirrel has been dead and in your yard for a while, there could be an accompanying smell.

It can take up to two weeks for a squirrel to decompose fully. This period means if you don’t find it soon after it dies, you may deal with a rather unpleasant odor for a while.

It is especially problematic if the squirrel died inside your walls or in the attic.

However, regardless of where it died, once you get rid of the carcass, there are a few things you can do to eliminate the smell, too.

It is imperative if you have pets that may be intrigued by the odor it creates.

Removing the dead squirrel is the first step in getting rid of the smell. Once you do this, you can deodorize the area where it died.

Outdoors, rinsing the area with water works well. Some other ways to mask or eliminate the smell include:

After trying some of these, you can hire a professional cleaning service if you still have a problem.

The Bottom Line: How to Handle a Dead Squirrel on Your Property

If you find a dead squirrel on your property, don’t panic. It happens, and it is actually fairly common.

The most common way a dead squirrel is disposed of is by scooping it up, putting it in a bag, and throwing it in the trash.

Regardless of what approach you choose, be sure to stay safe. Use gloves, a shovel, and wash your hands well. This regard for safety is going to keep you, your family, and your pets safe. 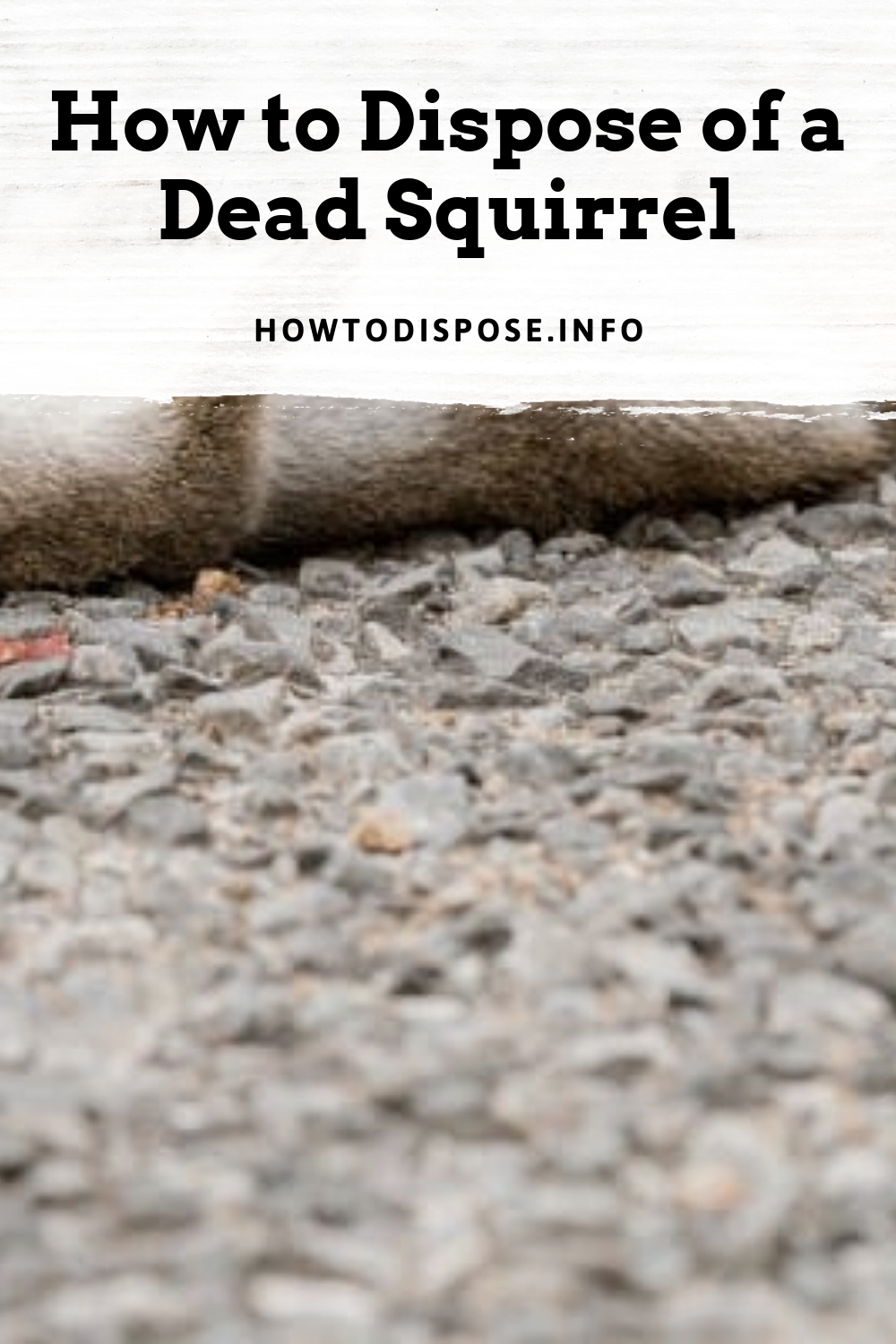