They are essentially thin plastic tubes that contain phenyl oxalate and fluorescent dye.

They need to be disposed of properly. Otherwise, they cause damage to our environment.

Let’s explore how to dispose of glow sticks properly!

How to Dispose of Glow Sticks

You cannot recycle glow sticks since the chemicals in them have contaminated the tubes.

The only way to discard used glow sticks that don’t have any punctures is to throw them in a landfill.

Before discarding them, but the glow sticks in a sturdy disposable plastic bottle or bag. Then, you can proceed to throw the bag or bottle in your trash.

Once they are in the landfill, they will gradually decompose as nature runs its course and rids the planet of unwanted waste.

However, this is certainly not the ideal situation since glow sticks will take eons to decompose.

Moreover, if they are not disposed of properly, then glow sticks can pose environmental hazards due to their chemical composition.

What Happens When Glow Sticks Get Punctured or Damaged?

Phthalate ester increases the durability, transparency, and flexibility of the plastic container of glow sticks.

Phenyl oxalate is the primary source of glowing light in glow sticks.

The hydrogen peroxide used in glow sticks is far more concentrated than the household version used as a cleaning agent.

These chemicals can cause numerous problems if you come into contact with them. Breathing in the concentrated form of hydrogen peroxide can cause respiratory issues.

When combined together, these chemicals can cause a whole host of negative effects if not disposed of properly.

If the chemicals inside the glow stick spill out, they can pollute the air. Moreover, since the plastic used in glow sticks cannot be recycled, it causes harm to the environment.

Needless to say, if a glow stick punctures or the chemicals spill out from it, keep it as far away from children and pets as possible.

How to Dispose of Punctured Glow Sticks

You need to dispose of punctured glow sticks as responsibly as possible. You can’t throw them in your trash because the leaking chemicals will contaminate the landfill.

To safely dispose of the punctured glow stick, you will have to research the hazardous waste disposal laws in your county, city, or state.

This is because each state or city has different recycling and hazardous waste disposal laws.

Then, you can locate the hazardous waste facility nearest to your house and drop off the container with glow sticks at the site.

Attentively, if you can’t find a site close to your house, you can get in touch with the facility to pick up the hazardous waste from your home.

They will charge a minimal fee to pick up the punctured glow sticks. However, you can rest assured that they will dispose of them properly.

How to Repurpose Old Glow Sticks

Since glow sticks are terrible for the environment, it’s best if you repurpose old glow sticks instead of throwing them in your trash.

Even though the glow stick will stop glowing eventually, you can use the pliable stick in many different ways.

You can use multiple old glow sticks to create wall hangings for your kids’ rooms.

You can even paint the sticks in different colors. All you have to do is tie a string on both sides of the stick and adorn your walls with the masterpiece.

You can also use them to make outdoor decorations and DIY holders for your plants.

A good way to repurpose old glow sticks is to make colorful DIY bracelets out of them.

It can be a fun project that you can do with your kids. You can also glue some glow sticks together to create many decorative or useful items, such as a small accessory box.

How to Light Up Glow Sticks Again

It’s filled with fluorescent dye and phenyl oxalate and is covered with pliable plastic material.

When you bend the stick, the glass tube breaks. It leads the chemicals to mix together, which results in a magical light-emitting chemical reaction.

Even though glow sticks can last from anywhere between 5 and 12 hours, you can certainly make them light up again.

All you have to do is use some heat to relight an old glow stick. Simply fill a pot with water and heat it until it starts to simmer. The water should be scalding hot.

Put your old glow sticks in the water and let them soak for about 30 seconds to a minute.

The sticks should begin to glow again as the chemicals slowly react to the heat outside. Once the sticks are glowing brightly, remove them from the water pot with a pair of tongs.

Let the glow sticks cool so that you can hold them in your hands without burning yourself.

These glow sticks will continue to glow for about 30 minutes to an hour, after which they will lose their luminescence.

If you want to prolong their glow, put them in a freezer to slow down the chemical reaction.

When in your freezer, the stick will not glow. When you take it out of your freezer, and it slowly comes to room temperature, it will begin to light up again.

Pro Tip: If you want to intensify the glow of a new glow stick, take it out of its packaging and dunk it in hot water. It will cause the stick to glow brightly. However, it will also significantly reduce the life of your glow stick.

Here are some warnings that you must pay heed to:

How long a glow stick glows depends on its color, size, temperature, and age.

Typically, a glow stick contains a fluorescent dye and several chemicals that are separated by a delicate glass tube.

These chemicals and dye interact when you break the fragile vile. This process releases photons, which result in the glow. The stick continues to glow until the chemicals stop reacting.

Most sticks come with an expiration date on the packaging. Depending on its size and brand, a glow stick has a shelf life of one to five years.

Newer sticks will certainly have a brighter glow than older ones.

However, even expired glow sticks will glow if you dunk them in hot water. They just won’t have the same brightness. Moreover, their glow won’t be as long-lasting as the glow of new sticks.

Here are some tips that can help you increase the life of your glow sticks:

Keep the Stick in Your Freezer

Keeping a glow stick in cooler temperatures will certainly help prolong its glow. The cold will slow down and stop the chemical reaction.

This way, when you take the stick out of the freezer, it will glow for a longer time. However, colder temperatures will diminish the glow of your stick.

Its glow will last longer, but it will be less intense.

When you want to use it, simply hold the glow stick under warm water. It will start the chemical reaction and cause it to start glowing again.

Don’t thaw the glow sticks in your microwave, as they contain hazardous chemicals.

If you want your glow sticks to produce a long-lasting glow, choose yellow or green glow sticks.

The fluorescent dye used in these sticks has the most staying power.

Purple and blue glow sticks will glow brighter as well, but their glow will not last as long as the glow of yellow and green sticks.

If you want to use glow sticks for an extended time, opt for bigger sticks.

The chemical reaction in these sticks will take a long time to reach its culmination, which will prolong their glow.

Shorter sticks will have quicker chemical reactions. Hence, they won’t glow for a long time.

Store Them in a Cool, Dry Place

Make sure to store the glow sticks in a cool, dry, and dark place.

If the sticks are exposed to sunlight or humidity, the chemicals inside them will degrade. It will impact the glow time and brightness of the sticks.

Since glow sticks are non-recyclable and harmful to the environment, it’s best if you don’t throw them away. Instead, you can repurpose them in different ways.

You can use them to create decorative boxes, wall hangings, and bracelets. However, if you want to dispose of glow sticks, make sure to do it responsibly.

Put the used glow sticks in a disposable bag and throw them in the trash.

For punctured glow sticks, you will have to transfer them in a container and discard them as hazardous waste. 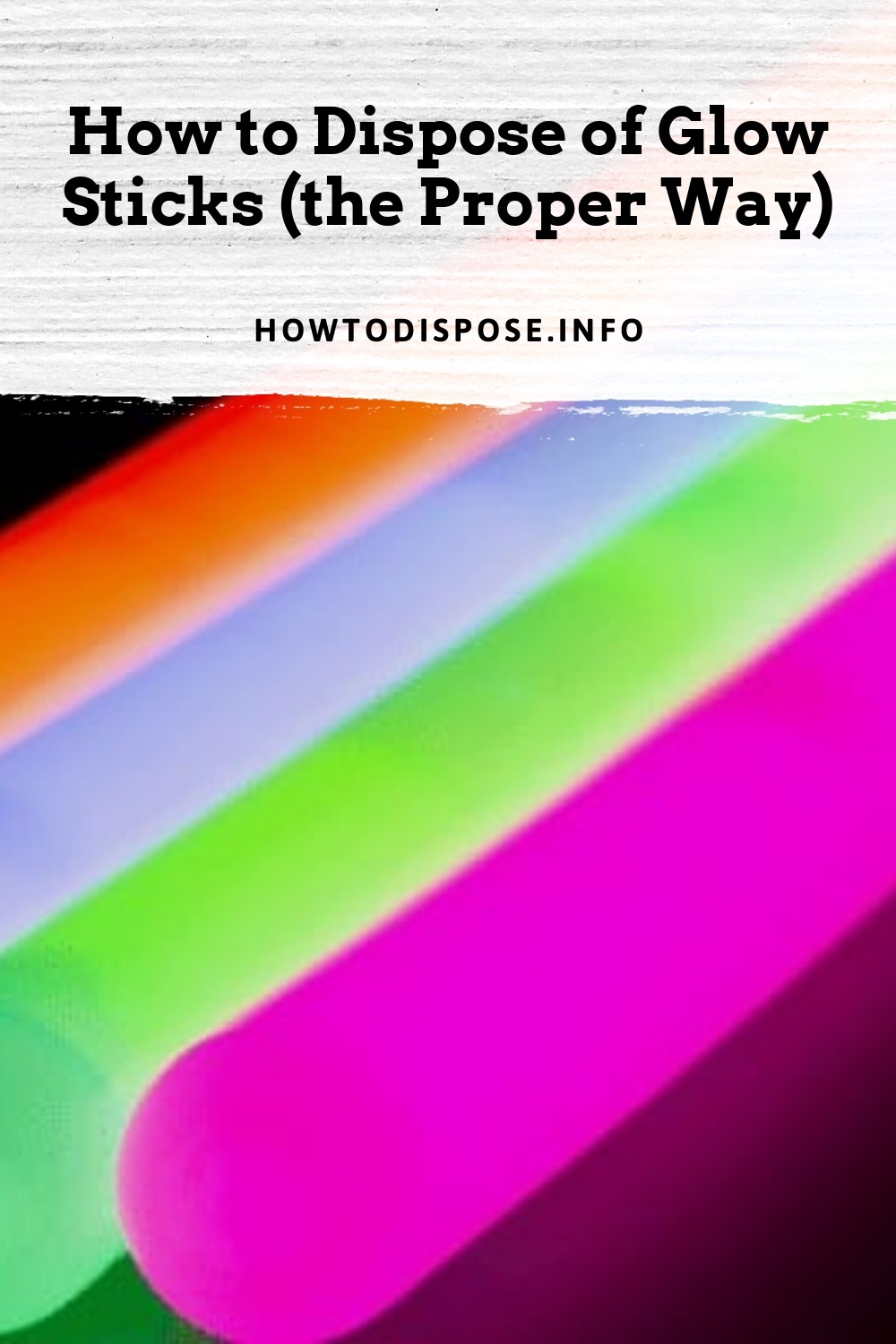