You can dispose of abandoned cars by contacting relevant agencies and asking them to pick up any suspected abandoned vehicles in your area.

But that’s only possible if the unclaimed vehicles are left on public land.

If the issue involves private property, perhaps a plot or brownfield, the owner must conduct cleanup campaigns by collaborating with different organizations such as scrap yards or junk care collection.

There are many federal and even private facilities that deal with cars parked in various spots throughout the city for days, with no applicants claiming ownership.

If you see such a vehicle near your place or anywhere really, you should get in touch with the following organizations to help you with the cleanup.

Many local government agencies can remove abandoned cars or can contact one that does if they receive a complaint.

Governmental departments of sanitation, transportation and parking enforcement, environmental protection, and public works can all get rid of dumped vehicles.

Even if they can do so, they will know who to connect with to get the job done.

One way of getting vehicle dump sites clear is to reach out to the facility centers your state offers.

Agencies like registration and car licensing, inspection, police, and environmental protection will know what to do if you give them the details.

That said, it must be noted that the car registration and licensing authorities may not actually help you remove abandoned vehicles.

But they can give you information about the owner so that you can report the issue.

There are two federal facilities that deal with matters such as car dumping or encroachment.

Out of the two names mentioned, the Bureau of Land Management is more likely to clear dumping sites, while the Environment Protection Agency would take up the issues with more relevant authorities.

Involving your neighborhood community can help you manage the problem of car abandonment as you can lodge a complaint and see if anyone turns up.

If not, you can ask the local scrape yard or junk car collection agency to take away the dumped vehicle.

Auto Scrap yards are excellent resources when it comes to disposing of abandoned cars.

You can contact one and have them pick up the unclaimed vehicle in your vicinity or wherever.

They will take it to the scraping facility, salvage as many parts of it as possible, and possibly crush it.

Car junk collection services are perhaps the most useful in removing unwanted cars; the name pretty much gives that away.

If you have such an organization in your county, reach out to the folks there and request them to collect the dump vehicles in your neighborhood and clear the site.

Getting rid of abandoned cars is essential as not doing so has many hazards that can endanger the surroundings and people in the vicinity.

Why Is Removal Of Abandoned Cars Important?

Many people can be a little dismissive of the fact that disposing of abandoned vehicles is important because they don’t see such automobiles as a hazard. And that’s undoubtedly an oversight that must be addressed.

Abandoned vehicles, also known as derelict cars, can pose a severe threat in more than one way.

One of the most serious concerns of having a derelict car in a locality is it becoming a resource to aid drug dealing and consumption.

Many users and suppliers use dumped cars as a means to exchange packets of illegal drugs for money.

Moreover, sometimes, such a vehicle can also be simply used as a drop-off location where consumers can get their drug supply.

Derelict vehicles can become a residing place for prostitutes, which enables them to run their businesses.

Naturally, having such an operation running in your area is not something you want. Besides, if you or people in your neighborhood have young kids, you don’t want them to be exposed to such an activity.

That’s not all; sometimes, prostitutes may even use a dumped car for illegal sexual activities.

Home for the Homeless

As unfortunate as it may be, homelessness is a prevalent problem in the United States of America.

This deplorable condition becomes worse when the homeless know that they can find refuge in abandoned cars.

Some might see it as a good thing, a silver lining, but it’s not.

Homeless people need proper houses or at least shelters to reside in, which they will not get (or work to get) if they have a derelict automobile to house them.

IF a car is parked on the street for days on end with no chances of anyone coming to pick it up, it will become nothing but a piece of junk, littering the space.

That will certainly not make a pleasant sight for the eyes and also obstruct street cleaning, which nobody wants.

Even if a car is dumped and not in use, it still contains gasoline and other combustible fluids that endanger the entire area.

These toxic liquids can cause damage to those in proximity. Sure, such fluids do not just turn into fumes and affect people’s health.

But if someone smokes near a dumped vehicle or does anything that can result in a spark or fire, it will injure people.

A Spot for Vandalism

For some unfathomable reason, every neighborhood has a group of individuals who like to vandalize properties or vehicles.

So those who enjoy indulging in said activity consider abandoned vehicles a perfect canvas to vandalize all they want.

The graphics illustrated in the process are rather explicit, at least more often than not.

Simply put, having an unwanted vehicle around works well for vandalizes. If you don’t want that to happen in your area, perhaps you should contact the authorities mentioned above.

Arson happens to be a grave reality in society, and abandoned cars surely enable it.

Serial arsonists or even people looking for some ‘fun’ can use derelict vehicles as the perfect resource to light a fire and get a laugh out of it.

As discussed above, dumped cars can be dangerous for people’s health as they contain toxic chemicals, which kids are mostly unaware of, making them vulnerable to getting affected.

Obviously, when someone doesn’t know what dangers a particular item poses, they will hesitate to go near it either out of curiosity or just for fun.

Whatever the reason may be, if kids go near abandoned vehicles, that could be dangerous for them.

And believe it or not, unwanted automobiles are known to attract young kids!

Beginning OF A Dumping Site

If residents of a locality let one or two dumped vehicles be around and do not take prompt action, that place can become a dumping site.

And that will make the problem much worse and hard to tackle.

Therefore, reporting an abandoned car and getting it removed is vital.

How to Know If a Car Is Abandoned

Rundown appearance is the most obvious indicator of an unwanted car. If you see one and aren’t sure if it’s abandoned, look at its tires, windows, doors, and other major parts.

If those seem out of commission, the chances are that you have an abandoned car situation to deal with.

Aside from the dilapidated condition of a dumped vehicle, there are a few signs to determine if it’s indeed an abandoned car and needs removal.

Sometimes people can park their car in an unknown location because it breaks down. But in such a scenario, the owner will make arrangements for repair and get their wheels out of there.

If that doesn’t happen and months go by, know that you have a case of an abandoned car at your hand.

Also, typically when someone leaves their car unattended because it seizes up, they put a note on the windscreen to notify anybody who gets suspicious as to why that vehicle is parked.

Simply put, you will know if a car is temporarily parked because it broke down or not.

A missing license plate or any other documentation telling who the owner is.

Another pretty straightforward way to figure out if a vehicle you have been seeing parked near your place for days is to look for any documentation or a readable license plate.

If you can find anything that gives you some info on the car, you can use it to file a report and let authorities take the matters from there.

Don’t let unwanted vehicles sit near your house or anywhere you can find them, as they are dangerous in several ways.

Contact the experts to remove a dumped automobile to ensure it is not used for any illegal purpose.

Lastly, involve your neighborhood community in the cleanup campaign against abandoned cars. 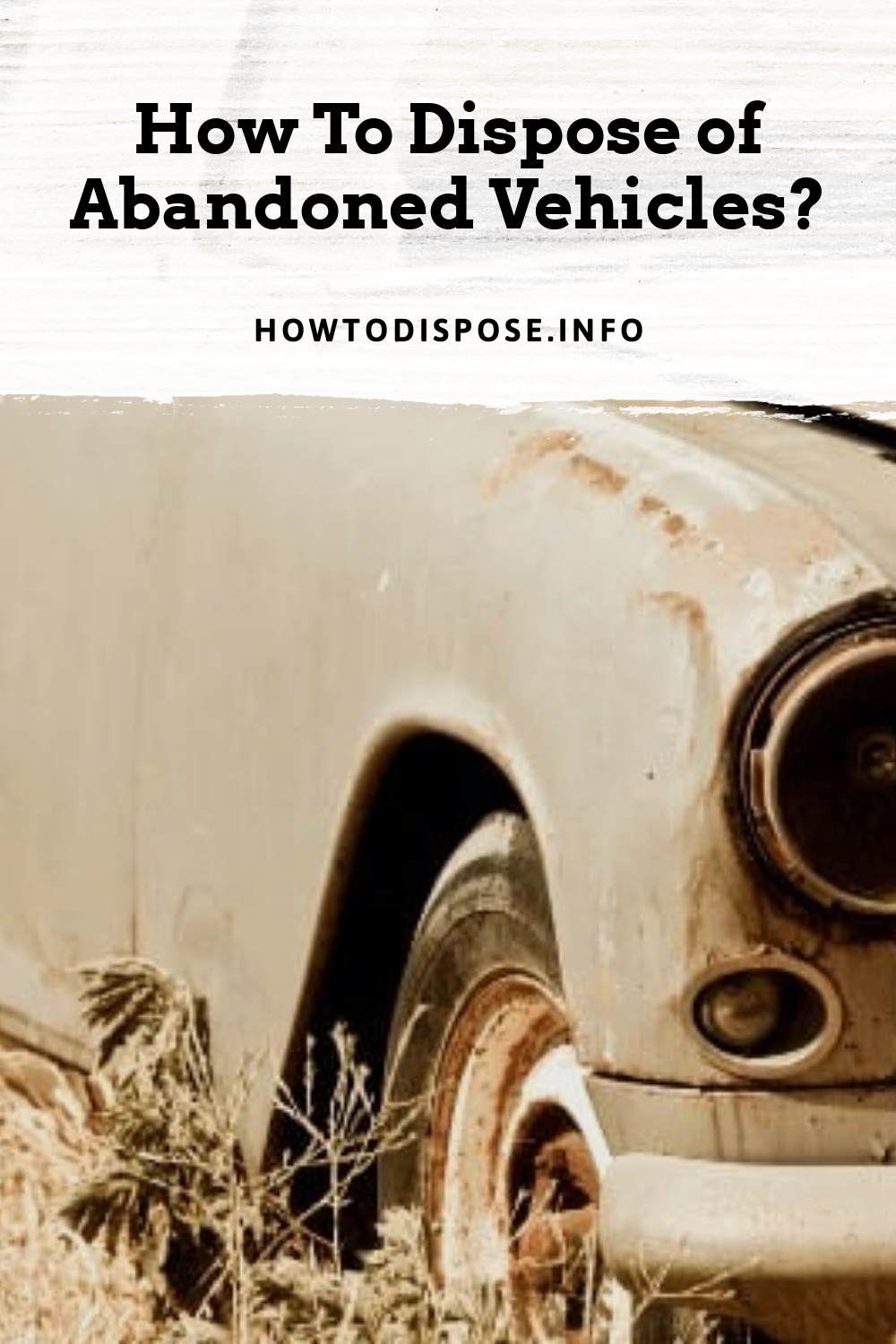