Changing the antifreeze in your car is an essential part of routine vehicle maintenance.

As a result, you can build up a substantial amount of unwanted antifreeze in your garage.

Disposing of your antifreeze by putting it in your garbage or dumping it down the drain can have devastating consequences on the environment and your health.

So, we’ll teach you how to safely and efficiently get rid of your antifreeze.

The Best Way to Dispose of Antifreeze

You have two options for disposing of your antifreeze—recycling it at a place that accepts used antifreeze or bringing it to a hazardous chemical disposal facility.

The good news is you shouldn’t have to travel far to find an antifreeze facility.

It’s a necessity for vehicles, and experts predict the antifreeze market will reach $5.9 billion by 2025.

Even if you have antifreeze recycling and disposal facilities nearby, it doesn’t necessarily mean you can use any of them.

Luckily, knowing whether you should recycle or dispose of your antifreeze is easy; you can only recycle antifreeze if it’s in its pure state.

Therefore, if you know your antifreeze came in contact with gas or oil, recycling it isn’t an option.

In that case, you’ll need to find a hazardous waste facility to dispose of it.

Where to Find an Antifreeze Disposal Facility

Different states handle antifreeze disposal in different ways. Therefore, the best method to get information about it is by looking on your state’s Department of Waste Management website.

In most cases, these websites offer a list of recycling and hazardous chemical disposal sites that you can search for by location.

Alternatively, your local auto store should be able to point you in the right direction.

If you’re interested in recycling your antifreeze, you can also use Earth 911.

They have a user-friendly website that will use your zip code to identify nearby antifreeze recycling sites.

Preparing Your Antifreeze for Transportation

You can’t toss your antifreeze into a bag (or double bag) and call it a day. That’s because antifreeze contains toxins like propylene glycol, ethylene glycol, or methanol.

Needless to say, you don’t want those toxins leaking through a bag or poorly packaged container. It could do a number on your skin or vehicle’s floor.

Therefore, we recommend putting your antifreeze in a tightly sealed plastic container. But it doesn’t end there.

If you take a sharp turn or are notorious for hitting the brakes hard, even a sealed container could open.

Therefore, we recommend using a bungee cord to hold your antifreeze in place.

Finally, to make life easier for the facility where you’re taking your antifreeze, it’s a nice idea to label the container with the antifreeze’s main ingredients.

Why Responsibly Disposing of Antifreeze is Important

Antifreeze that you don’t properly dispose of can have devastating effects on the environment.

It contains toxins that are dangerous to humans, animals, and the planet.

Below are some of the issues that can arise if you don’t dispose of your antifreeze as we described here:

According to the Environmental Protection Agency, the chemical ethylene glycol is responsible for most of the damage that antifreeze can cause.

They warn that even short-term exposure to improperly stored and disposed of antifreeze can cause a devastating three-stage impact.

Not all antifreeze has the same makeup.

However, the most dangerous chemicals in antifreeze usually contain one or more of the following:

The list above is in order of most harmful to humans, animals, and the environment to the least dangerous.

Things NOT to Do When Disposing of Antifreeze

By now, we hope that we’ve convinced you of the importance of disposing of your antifreeze through a designated facility.

But in case you’re still tempted to take the cheating route, the information below will likely change your mind.

Pouring it Down Your Drain

By using the word “drain,” we mean any water outlet in your house, including dumping antifreeze down your toilet.

Aside from contaminating your drinking and groundwater, antifreeze has a sweet taste that attracts animals.

Did you know that your pets or wild animals might be able to access your drain water through a storm drain?

So, if that water contains antifreeze, they’ll likely lap it up. Unfortunately, doing so could lead to death.

Dumping it Onto Your Lawn

Pouring antifreeze onto your lawn is arguably even worse than dumping it down your drain. Doing so will give your antifreeze even more direct access to the water table.

That can be especially dangerous to your health if you use a well.

Nevertheless, we understand that antifreeze accidents can happen.

So, if your car’s antifreeze accidentally spills on your lawn while you’re changing it, it’s crucial to react immediately.

Let’s look at what you can do if antifreeze lands outside of its container.

How to Handle an Accidental Antifreeze Spill

It’s critical to react immediately regardless of where your antifreeze spills.

Begin by wearing gloves, a mask, pants, and a long-sleeve shirt. Then pour a generous amount of baking soda, sand, or any other material that will soak up the antifreeze.

After, layer paper towels over the soaking agent. Within three hours, use a new set of paper towels to scoop up your antifreeze concoction.

Use soap and water to thoroughly clean the area, ensuring you hose it down well to disperse any spare antifreeze particles.

Because the ethylene glycol in antifreeze is so potent, even in its diluted state, you shouldn’t throw the paper towels in the trash.

Therefore, put any items you scoop up into heavy-duty bags and bring them to a chemical waste management facility.

What to Do if You Have Antifreeze Poisoning

If you get antifreeze on you during an accidental antifreeze spill or clean-up, or if your child ingests it, call the American Association of Poison Control Centers immediately.

Should your pet get into antifreeze, call your vet right away.

The bottom line here is that you should properly dispose of your antifreeze as soon as you have used liquid lying around your garage.

You should also store new antifreeze on a high shelf where it won’t fall.

What About Disposing of Non-Toxic Antifreeze?

Some antifreeze containers have a non-toxic label. However, this is somewhat of a misnomer.

In fact, some foods even contain propylene glycol because it helps them have a more attractive consistency and texture.

Nevertheless, propylene glycol is still a toxin. If ingested in large quantities, it can cause the following issues:

Needless to say, it’s unlikely that you’ll be downing a bottle of propylene glycol. However, your kids or pets could.

Furthermore, a large bottle of propylene glycol-based antifreeze isn’t something you want to be pouring down your drains or onto your lawn.

Therefore, you should dispose of “non-toxic” antifreeze the same way we discussed disposing of the toxic varieties.

FAQs About Disposing of Antifreeze

If you still have questions about getting rid of your antifreeze, our answers below can help you out.

If you leave antifreeze in an open container, it will evaporate over time. Doing so is extremely dangerous, for children or animals could consume it.

Furthermore, it’s toxic to breathe in the chemicals in antifreeze.

Can you reuse antifreeze?

You shouldn’t take antifreeze out of one vehicle and put it into another. However, pure antifreeze is recyclable.

Therefore, you can purchase recycled antifreeze that’s undergone a process to make it reusable. Factories typically do so by checking for metals and adding chemicals.

In fact, you may already own recycled antifreeze without even realizing it.

Yes, antifreeze does expire. There should be an expiration date on the container. It often expires within five years of your purchase date.

If you find a bottle of expired antifreeze in your garage, don’t use it on your vehicle. Instead, recycle or dispose of it via the methods we described here.

Is antifreeze a hazardous waste?

Yes, most antifreeze is hazardous waste. Even if you purchase antifreeze with a non-toxic label, you should still bring it to a chemical waste disposal or recycling facility.

We applaud you for doing your due diligence on how to dispose of antifreeze.

Getting rid of your old antifreeze isn’t as easy as tossing it in the trash. However, the large number of recycling and waste management facilities in most areas makes it relatively painless.

If you’ll be disposing of antifreeze that hasn’t been in contact with oil, gas, or other materials, it’s safe to recycle.

Otherwise, you’ll need to take it to a chemical waste management facility.

What are you waiting for? Get all that old antifreeze out of your garage so you don’t have to hold your breath every time your dog or child wanders around it. 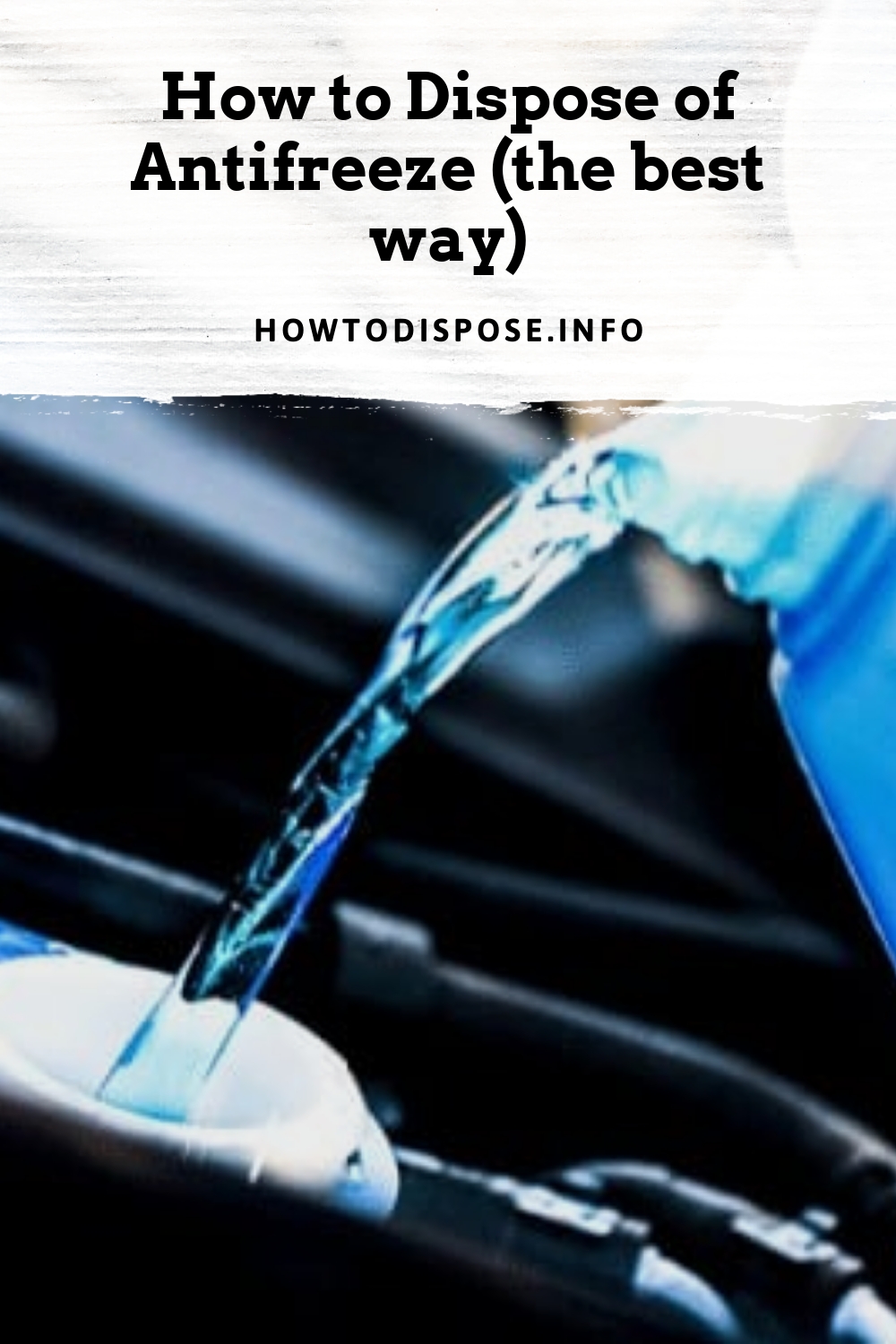