Nearly every person consumes oil, yet most of them are confused about how to properly dispose of it.

You may preserve your canola oil for later use, but if it has turned smelly or has a bad texture, or you no longer want to use it, there are various simple and safe methods to dispose of canola oil.

Contact a local waste management department and check their approved methods to dispose of canola oil or check any of their suggestions or requirements.

Why You Should Not Pour Canola Oil in the Drain?

When we have leftover canola oil, we may be tempted to dump it down the drains, but this can cause clogging and damage to the plumbing.

If you pour canola oil down the kitchen sink or via the trash compactor, it hardens and blocks the lines.

This can cause damage to your kitchen piping system or the area’s sewer system.

And if it is dumped on the ground or thrown back into the environment, it might be hazardous to wildlife.

Since more people still prefer to cook and make their meals at home, local sewage treatment agencies have struggled to keep up with the number of contaminants such as grease and oil blocking their sewage system.

The issue is that most of us still do not know how and where to securely dispose of canola oil.

Should you just toss it in the garbage? Will the garbage collectors pick it up? Or spill the canola oil in the drain?

How to Dispose of Canola Oil?

Here are some smart and safe methods to dispose of canola oil without letting it harm anyone or anything:

Cooking Oil Can Be Reused

If you intend to use the oil again for deep-fry meals or use it frequently, you may preserve the canola oil for later use.

To extract any grains and particles, filter the oil over a tea strainer or several folds of cheesecloth.

Then, transfer it into a sealed container and keep it somewhere dark until you use it again.

It is critical to remember that you must only reheat and use canola oil, not more than twice. Before using it again, take a whiff.

Throw it out if it stinks and looks spoiled.

Keep in mind that every time you recycle oil, its quality worsens and the smoking point (the degree to which it will get burned) keeps dropping.

Freeze until It Becomes Completely Solid

If you want to discard it, you must first refrigerate or freeze the oil to solidify it.

Place the oil in an old can and place it in the freezer or refrigerator.

When the oil has solidified sufficiently to fall out of the container in a single piece, it is set to be discarded.

And if you just have a small amount of canola oil, pour it into a small cup or mug and place it in the refrigerator.

As it starts to solidify, scoop it out of the cup with a spoon and toss it in the garbage.

Then, before cleaning the cup, wipe it clean with a paper towel or used napkin because the excess oil can block your veins if consumed.

If you wish to get dispose of the canola oil, set it aside to cool fully before pouring it into a disposable container with a cover and throwing it away.

Cardboard dairy boxes and other paper, plastic, or wax containers are examples of common biodegradable containers that function well.

Styrofoam and other disposable takeaway containers are also viable choices.

Add It to Your Compost

Used canola oil may be composted into your garden soil, where earthworms and other tiny organisms will devour it.

If you add the oil used for cooking meat, then the compost might attract rats, raccoons, and other critters in the compost bin and ruin your garden.

Another point to keep in mind is that you should not use huge amounts of oil in the compost as it might act as a hydrophobic barrier and block the mineral, water, and airflow for your plants that might cause them to rot and die.

Pour into the Garbage

If you just have a little amount of canola oil, you can dump all that securely in a half-filled plastic garbage bag.

Just make sure to let the frying canola oil cool down before closing the bag.

Turn It into a Pesticide

You can use your used oil as a pesticide to keep insects away from harming your poor plant babies.

Simply add the oil to a spray bottle and gently spray it on your plants. The oil spray will keep the insects away from your plants or kill them for good.

But don’t spray too much as it might block the plant from absorbing nutrients or carrying out photosynthesis, which may harm or stunt their growth.

Mixing with Other Products

Prior to disposing of the canola oil, combine it with a microfiber substance such as cat litter, gravel, or wood chips, which absorb the liquid quickly.

Store leftover oil in a used jar until it becomes rotten or when it is time to unload the recycle bin; pour the oil first into the box before discarding.

A creative and safe way to dispose of your used canola oil could be by making soap with it.

All you need is your used canola oil, water, and caustic soda (NaOH).

You can also add some essential oils to add a good smell to your soap, and voila! Your soap is ready!

Isn’t it a safe and fun way to get rid of your oil without pouring it down the drain and causing harm to any of your pipelines or the environment?

Invest in an Oil Disposal System

If you’re doing a good amount of frying, you should purchase an oil disposal system package, including a plastic container and foil-lined pouches that can store up to 2 pounds of oil.

Transfer the chilled canola oil into a pouch and place it in the container.

When the container is filled, zip it and toss it in the trash.

You can also buy fat trapping bags or containers, a great hassle-free system to dispose of canola oil.

They are simple plastic bags with an inner aluminum foiling designed to hold the oil or grease in an odor-free, completely hygienic device.

The aluminum helps the bag not to break and cause a mess.

All you have to do is keep filling the bag with your leftover oil and toss it away when the bag gets full.

Covert the Oil into Biofuels

Yes! It might be hard to believe, but used canola oil can be converted into biofuels, which combine oils such as animal fats and vegetable oils with an alcoholic agent such as methanol.

It is a good alternative to petroleum.

It is allegedly less hazardous for the environment and generates less damaging greenhouse pollutants when converted into fuel for vehicles such as motorbikes, tractors, and other automobiles.

Although you might not have a sufficient amount of canola oil to accomplish this on your own, approaching your nearby eateries to ask if they partake in this fantastic recycling technique of making biofuels is a terrific way to safely dispose of your excess canola oil while also saving the environment.

You can also contact a disposal company that deals with household hazardous wastes, including oils, grease, medical wastes, etc.

You might have to drop the oil wastes at their location or call them and let them handle the case if they have a pick-up service.

Another option can be contacting any recycling center near you that deals with cooking oil and simply drop the oil bags there or use their pick-up service (if they offer one).

You can simply search for a “Recycling Center near me” to find a site that specializes in safe recycling methods.

Then enter your zip code on their website to search for the nearest franchise or drop-off locations of your oil waste bags, and it will be in good hands!

Do Anything but This When Disposing Canola Oil

While all the ways mentioned above are safe, people might go for the easier ways that are usually big NOs because of the harm they cause.

When it comes to getting rid of old cooking oil, there are a few dos and don’ts.

Pouring canola oil down the sink or into the toilets is not a good idea. It has the potential to block not just your pipelines as well as the local sewage mains.

Oil should also not be added to a septic system.

Oil-contaminated water is very expensive and difficult to clean, if not impossible. And if not treated in time, it may eventually contaminate nearby rivers.

Be a good earthling and do your best to preserve this planet. 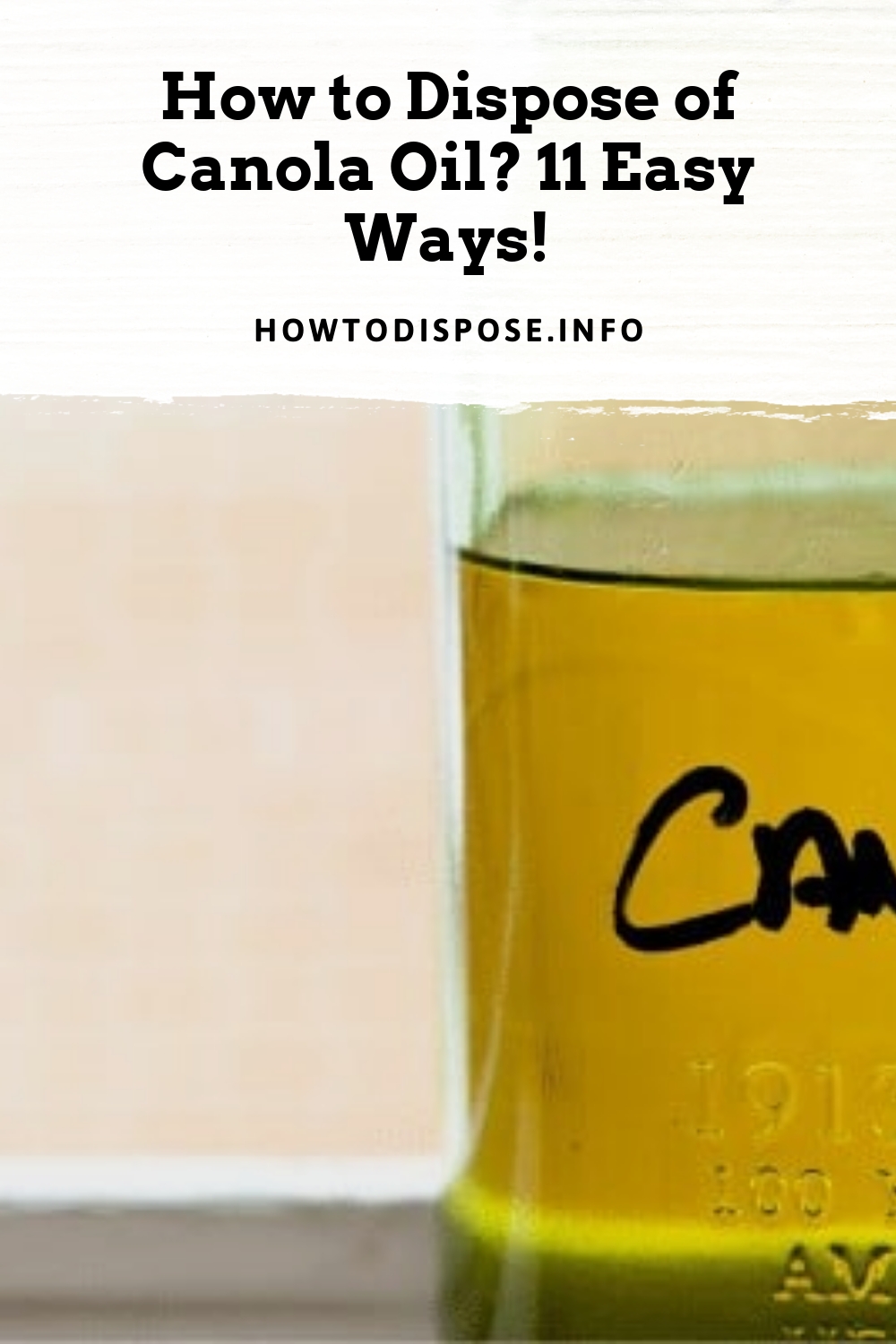