Cooking oil adds flavor to food, but disposing of the oil can create a real mess.

You should know how to dispose of the oil properly; otherwise, it can have dreadful consequences not just on the plumbing and the environment at large.

In this blog post, you will learn some tips with regards to disposing of cooking oil.

Moreover, you will also find costly mistakes that you should actively try to avoid when disposing of the oil.

Here are some ways to dispose of cooking oil and some useful tips when doing it.

You should consider freezing the oil before disposal. Solid waste is easier to deal with as compared to liquid.

Just pour oil into an old can and keep it in the freezer until the oil solidifies. You can scoop out the oil easily when getting rid of it.

Avoid freezing the oil in a plastic bag or glass jar. They can break when freezing, creating a mess in the freezer.

The mess will be particularly hard to clean if disposing of a large quantity of oil. You should use a metal can or sealable plastic container when freezing the oil.

Another tip to properly dispose of cooking oil is to mix it with an absorbent material such as sawdust or flour. You should store the mixture in a container to dispose of it later on.

You can safely dispose of the thick paste in the trash can. Just make sure you keep the paste in a trash bag before tossing it into the garbage can.

You can also re-use the cooking oil. Cooking oil can be reused two to three times. Just make sure that the oil does not smell bad.

To reuse the oil, drain it using a coffee filter or cheesecloth to remove food particles. You should store the oil in a can in the freezer, fridge, or any cool area away from sunlight.

The cooking oil can be reused for baking, sautéing, and deep-frying. When the oil goes bad and turns rancid, you should dispose of it off safely using the tips mentioned in this blog post.

Remember that the smoking point of cooking oil is reduced after each use. It means you need to wait for less for the oil to get warm before cooking food in it.

Re-using the same oil will reduce the amount of oil you have to dispose of.

Another tip is to create soap from the cooking oil. Soap is generally made of fat and you can use cooking oil for creating soap.

This is a safe and effective way to dispose of oil as compared to tossing the oil in the garbage can.

Create a Compost Heap from Oil

Cooking oil can be used to create a compost heap. Earthworms and other small critters love oil.

But before using the oil as a compost heap, you should make sure that it is safe for the plant.

Moreover, take care not to use oil used to fry meat, as compost will attract rats, raccoons, and skunks.

Use Oil as a Pesticide

You can use cooking oil as a pesticide to get rid of pests infesting your plants. Just put the oil in a spray bottle to use as a pesticide on plants.

Spraying the plants with pesticides will deter the pests from messing with your plants.

One way to dispose of used cooking oil is to give it to local biofuel companies.

Large restaurants usually disposing of fuel this way. You can also discard the oil by donating it to renewable energy companies.

Compostable trash bags are made for storing oil and other waste that attract critters. You can buy 100 percent compostable heavy-duty trash bags online.

The trash bags are fully compostable, which won’t harm the environment.

You can discard cooking oil in the compostable trash bag and toss it in the compost pile. You won’t have to worry about attracting pests or doing damage to the environment.

The trash bags are biodegradable, which will produce zero harmful waste.

The leak-proof compostable trash bags are made of bio-based renewable materials. The materials used to make the biodegradable trash bags include plant starches, sugarcanes, and vegetable oils.

They don’t contain any synthetic polyethylene or other environmentally toxic materials. You can buy different size biodegradable trash bags based on what best meets your requirements.

Since the bags are made of plant extracts, they will degrade in the soil without causing any damage to the environment.

Discarding oil has created a problem for many municipalities.

Here are some of the things that you should never do when disposing of cooking oil.

Don’t Pour Oil Down the Drain

One common mistake that many people commit is pouring the oil down the drain. You should not drain cooking oil down the sink as it contributes to clogs.

The clogs can result in thousands of dollars of plumbing problems for the municipalities.

Cooking oil solidifies, similar to candle wax when poured into the sink. It will damage both the house and municipal plumbing.

The oil gradually decreases the space through which the water flows. Eventually, the grease buildup in the pipes will cause a blockage in the drain.

Pouring degreaser or cleaning detergents won’t help in the cause of a clog. It can lead to overflow of the gutters causing environmental and health damage.

If someone at the house has poured cooking oil down the sink, you should take immediate action to clean the drain before it causes damage to the pipes.

You can also use an enzyme cleaner such as Roto-Rooter’s Pipe Shield to remove waste build-up in the PVC or metal pipes.

If none of these tips work, you should call a plumber to address the clogging problem.

Don’t Pour Oil in Trash Can

Another common mistake people make when disposing of oil is to pour it into a garbage can.

This is not recommended, as it will attract pests such as raccoons and rats. Moreover, the oil in the garbage can ruin the garbage trucks.

You can dispose of the cooking oil by putting it in a sealed metal can. The container in which you store the oil should not be easily breakable.

Another mistake you should avoid making when disposing of cooking oil is pouring it on the ground outside.

This is also not recommended as the oil will buildup underground.

Vegetable and animal-based cooking oils can create environmental issues. The Environmental Protection Agency (EPA) states that oil that is disposed of outside can cause harm to the wildlife.

So, you should not dispose of cooking oil outside.

Don’t Use Large Amount of Cooking Oil as Compost

You should use a small amount of cooking oil as compost. But large amounts of vegetable oil will ruin your plants.

It will prevent proper airflow in the soil, and cause the plants to wither.

Also, you should not directly pour the oil into the compost pile. This will attract vermin and pests.

As mentioned previously, you should pour the oil into a compostable trash bag before tossing it in the compost pile.

Why You Should Properly Dispose Of Cooking Oil?

Taking precautions in disposing of cooking oil is important.

The EPA estimates that nearly 47 percent of blockages in the municipal sewer line occur due to oil, grease, and fats.

Cooking oil disposed of by homeowners, restaurants, and industries are responsible for about half of all sewer blockages cost a lot of money for the respective counties.

The EPA regulates cooking oil as per 40 CFR 112 that also covers petroleum oil. They have the same environmental effect create a toxic environment for plants and animals.

Although petroleum oil catches all the media attention, the fact is cooking oil is equally destructive for the environment.

Improper disposal of oil can also result in fines. Disposal of a large amount of oil without a permit can result in up to $5,000 in fine and 5 years in jail.

The penalty on organizations is more severe that can force them to wind up the business.

Cooking oil should be disposed of properly.

You should never pour oil used for cooking in the sink or inside the trash can. Consider pouring the oil in a biodegradable bag or sealed metal can before tossing it in the garbage can.

Remember that all types of oil including cooking oil can cause damage to the groundwater and wildlife. So, you should never dispose of the oil outside.

Consider reusing the cooking oil and dispose of it in a proper manner using tips mentioned in this blog post. 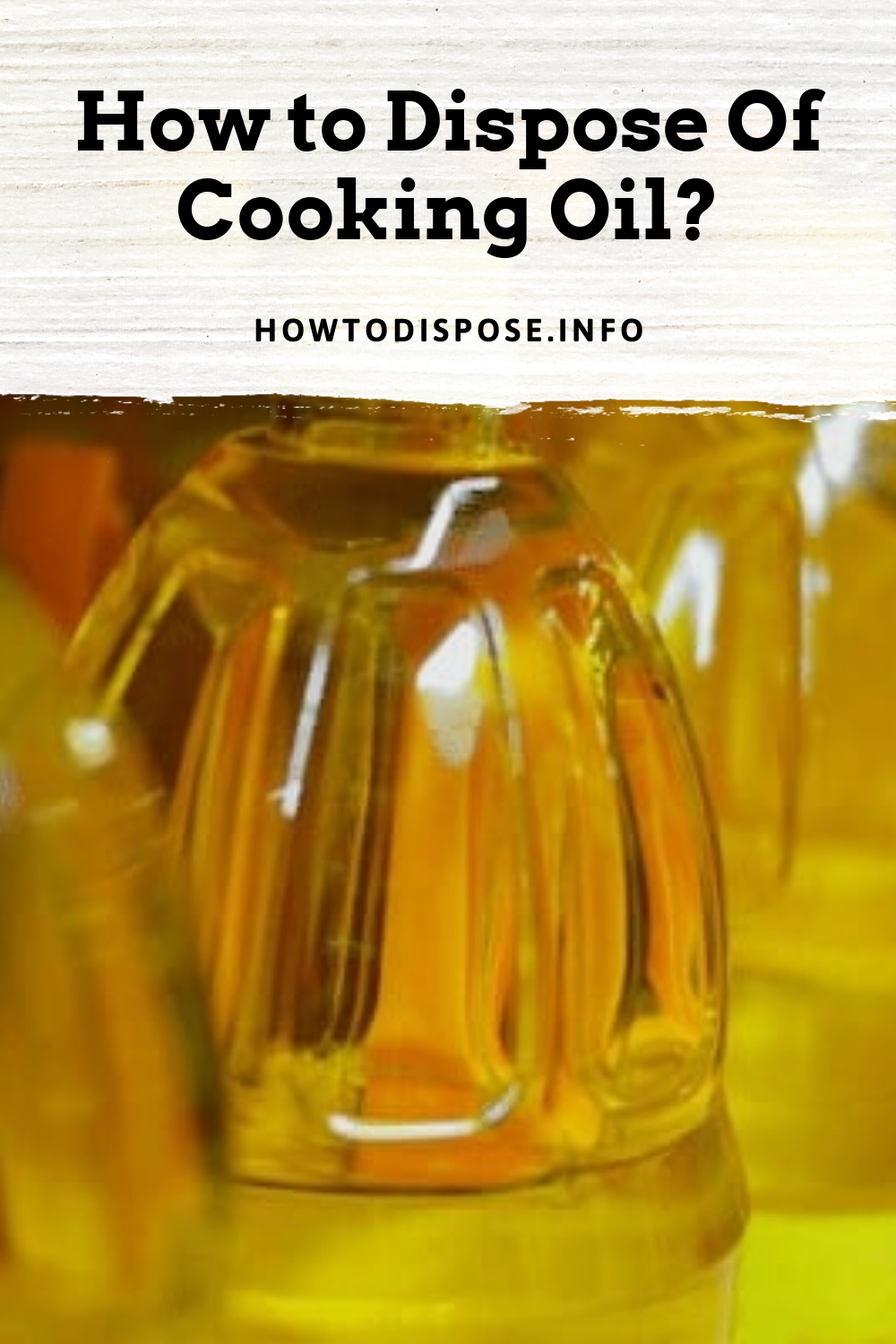