Almost every person has played with Orbeez at one point in their lives. Seeing little balls inflate in water is enough to enhance any child’s day.

But as we all know, no matter how much you take care of them, Orbeez have a limited lifetime.

Even if you use the Orbeez balls for a variety of creative purposes, they won’t survive indefinitely. So, what happens when Orbeez appear to be worn out and no longer serve a purpose?

How to Dispose of Orbeez?

If you don’t want to waste a fortune fixing a plumbing disaster, you need to avoid discarding Orbeez by draining or flushing them down.

Since these water beads are considered to be biodegradable, they are safe to use in numerous ways.

Here are 2 basic ways you can dispose of unwanted Orbeez:

One of the most challenging things about Orbeez is that while they are fun to play with, it is hard to figure out how to dispose of them safely.

Even though Orbeez are considered biodegradable, they just do not match the environmental requirements for biodegradable materials.

However, you will be relieved to learn that there are several sustainable solutions you can do to safely dispose of your Orbeez.

After you are done playing and utilizing Orbeez, the best way to safely dispose of them is to plant them and use them for gardening purposes.

Gardening is considered to be a safe bet when it comes to disposing of Orbeez since Orbeez were initially supposed to provide gardeners ways to retain moisture in their soil, and they provide a useful purpose to the environment.

Yes, you can throw the Orbeez outside in the trash pail. However, if you’re going to do something, make sure you do it effectively.

To begin, gather your Orbeez. For this, you can use a garbage bag or a trash bag.

However, if you’re using a garbage bag, make sure you’ve emptied the water out of the Orbeez first. This prevents the bag from getting wet and tearing when you place the beads in it.

If you’re using a plastic bag, you’ll need to seal it or tie a knot after you’ve bagged your Orbeez. The sealed bag can then be tossed outside in the trash pail.

This step is necessary to keep the Orbeez from escaping from the garbage can.

They have the potential to injure passers-by if they fall out. They may even be mistaken for food by your pets and get eaten.

As a result, double-check if you’re using disposing of Orbeez correctly. Do a good job of getting rid of them.

Finding a means to recycle or repurpose an item is always the better decision, and it should always take priority over tossing it in the trash.

You can deflate your Orbeez back to their original size to make them easier to store and then fill them up again when you need them for anything else.

Given the origins of Orbeez and the idea that people add them to soil or grow crops in them, it’s logical to wonder if they’re environmentally friendly.

Water beads in general, and Orbeez in specific, are considered to be biodegradable. Furthermore, Orbeez are non-toxic.

Despite this, Orbeez must be used carefully around children, and they are not suggested for kids under the age of three because they might cause choking.

Orbeez are recommended for children aged five and above, according to the manufacturer’s guidelines.

Even so, at least when first exposed to the toy, it’s a smart idea to make them enjoy the Orbeez under your monitoring.

Many children may be enticed to try them because of their brilliant colors, which make them appear to be sweets.

One Orbeez bead should travel through the digestive system without causing any issues, but if more are swallowed, medical assistance should be considered.

Orbeez is not only good friends with humans but also with the environment. Orbeez is, without a doubt, environmentally friendly.

They do not harm the environment whether they wind up in the trash or any other place because they decay eventually. They’re also free of harmful chemicals.

How Long Does it Take for Orbeez to Decompose?

Orbeez is not plastics, and that’s why it takes Orbeez decades to decompose, while plastics, on the other hand, decompose in a few years.

The reason behind this is explainable and not farfetched.

One of the easiest ways to decompose Orbeez is to throw them into your backyard, and because Orbeez absorbs water, it soaks up every time it rains.

As a result, it takes longer for Orbeez to degrade because rain slows down its capacity to break down swiftly.

Even though Orbeez are environmentally friendly, they, on the other hand, are not recyclable. Orbeez are not made of plastic or any other recyclables.

The superabsorbent substance is not recyclable in and of itself.

As explained above, if you have to get rid of Orbeez, you can do one of two things:

But what we didn’t mention is that Orbeez, while not recyclable, are extremely reusable. They can be used as LED lamp lights, air fresheners, and even art pieces.

Your imagination is the only limit to what you can do. Here are some creative uses for Orbeez.

Even though you can’t recycle Orbeez; there are ways to reuse them:

You can use Orbeez as a vase filler for birthday or graduation parties. You can utilize transparent ones in glass vases with color-changing underwater LED light balls.

You can use vases and embellish them with ribbons and decals to match your party’s theme, then leave the bead-filled vases out all day.

When it’s nighttime, you will most definitely fall in love with this when you turn on those LED lights and place them in the display for a lit-up and lovely effect.

Orbeez could be a terrific alternative to the common Nerf guns that youngsters are so fond of!

An Orbeez gun, unlike a traditional Nerf gun, is loaded with Orbeez rather than Nerf bullets, which can be a headache for parents who have to clean them up after use.

They’re not only safe for children to play with, but they also make for fantastic outdoor activities.

There’s no need to chase down the kids and pick their bullets in order to save your pet from swallowing them.

Orbeez will decompose naturally in your backyard, leaving only happy memories!

Encourage your youngster to fill Orbeez into a balloon to improve their fine motor skills.

After a few fistfuls of beads have been placed inside the balloon, just fill it with water and tie the end before placing it in the freezer.

Cut the balloon off once it has totally frozen, and set the frozen Orbeez balls in their sensory bin or a jar with water to witness what occurs as the ice melts.

We all are pretty familiar with slime, and luckily you can make the slime yourself if you have extra Orbeez lying around.

To do that, all you have to do is mix baking soda, glue, food coloring, and some mixing glue in a bowl.

After that, all left to do is add Orbeez along with a pinch of glitter in order to add sparkle.

Even though it is fun to play with, it can have harmful effects if swallowed. So, make sure that you reserve this activity for kids who know better than to taste it.

Let’s have a race, shall we? Place many toys in your Orbeez tub. Whoever can get them out the fastest, wins.

If you’re not in the mood to race, your child will still enjoy the thrill of getting their hands in these slick, glossy Orbeez and toys.

On a given day, they’ll sit and play with them for hours. Use waterproof toys, and keep an eye out for those quick hands trying to put a power toy into the water. Keep them at a safe distance.

To Summarize, Orbeez should be thrown away in the trash or garbage. Orbeez should not be submerged in water or flushed down the toilet since they will swell and choke your pipes.

You’ll then have to hire someone to come out and solve your new plumbing problems.

Even though children enjoy playing with Orbeez, they must be careful not to mistake them for sweets and consume them! 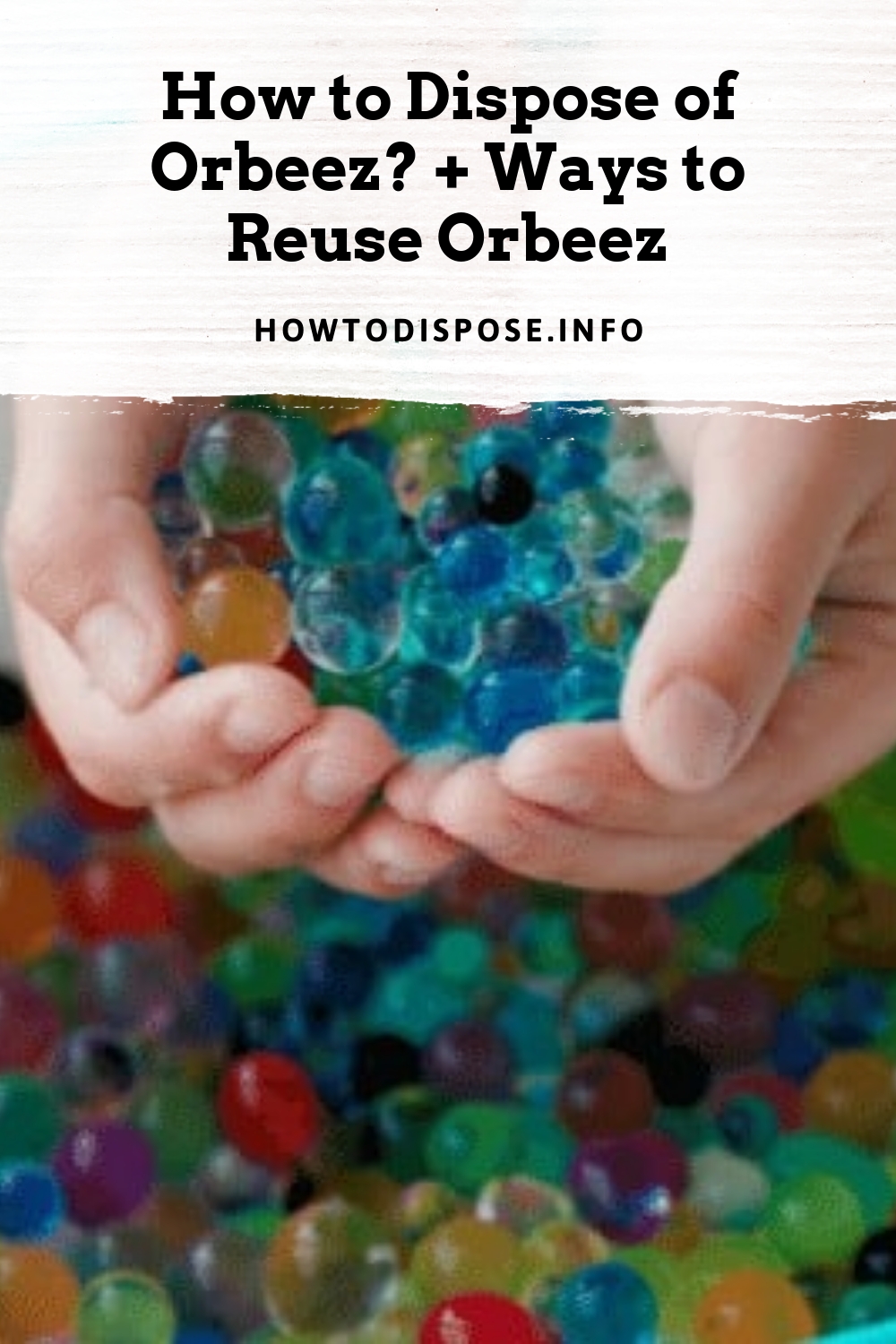