Railroad ties are used popularly in landscaping. They were first invented to provide rectangular support for railroad tracks.

Today, you can find several different types of railroad ties such as concrete, wooden, plastic, steel, and stone block ties.

These might be treated or non-treated. In this blog, we will learn how to dispose of railroad ties or reuse/recycle them.

Most railroad ties are made of creosote-treated wood to ward off fungal invaders that degrade wood.

Creosote is a chemical that can be harmful to human health and the environment. Hence, extra care must be taken when disposing of railroad ties.

There are mainly two ways to dispose of railroad ties:

As mentioned earlier, railroad ties are mostly made of wood treated with creosote.

Some components of creosote dissolve in water while others move through the soil to groundwater. Parts of creosote that are insoluble in the water remain in place in a tar-like mass.

Once in groundwater, it may take years for creosote to break down. It can build up on animals and in plants.

The International Agency for Research on Cancer has claimed that creosote is most likely carcinogenic to human beings.

Even though creosote is not used for treating wood typically used in a residential setting, it is common to find old railroad ties at homes used as landscaping materials.

Because of this, the U.S. Environment Protection Agency has conducted thorough research and published specific guidelines for homeowners handling creosote-treated railroad ties.

The authority recommends that homeowners:

In this section, we will discuss how to and how not to dispose of railroad ties.

How NOT to Dispose of Railroad Ties

It would be best if you never burned creosote-treated railroad ties. Burning them may release toxic gases and chemicals through the smoke.

This can cause illnesses as well as other health hazards. The ash from the burning treated wood that contains creosote will have several toxic properties and can be detrimental to your health.

Similarly, if you are thinking of cutting treated railroad ties with a power saw, be wary that the released sawdust can go into your lungs and respiratory system.

This inhalation of sawdust can cause respiratory problems for you, such as difficulty breathing. Hence, it would help if you always used a mask or a respirator when sawing treated railroad ties.

The method to dispose of railroad ties is more or less the same as any other solid waste.

However, before disposing of them off with your other solid waste, you should definitely check with your local county and study the municipal laws regarding the disposal of hazardous substances.

Some places do not allow solid waste disposal of materials that contain toxic chemicals such as creosote.

Below are the two ways for you to dispose of railroad tires:

The safest way to get rid of any leftover railroad ties is to dispose of them in a landfill. Most states in the U.S. have certain regulated landfills that accept railroad ties.

As your first step, you must get in touch with your area’s local landfill. Find out whether or not it accepts railroad ties.

If they are treated with toxic chemicals, you must let the landfill authorities know about this. Do not submit treated railroad ties to a landfill without taking permission.

Ensure that you remove all nails, screws, adhesive linings, and materials from the railroad ties before transporting them to a landfill.

Take extra care when removing these things from treated railroad ties. Your railroad ties must not be more than 8 feet long if you are disposing of them in a landfill.

Before you read any further, let us tell you that burning railroad ties in a residential area is only for untreated railroad ties made of wood only.

You can burn untreated railroad ties as a fuel source as you would do with any other type of wood.

However, for treated railroad tires, you must adhere to the strict guidelines put in place by the Federal Air Pollution Control in 2010.

These guidelines allow the combustion of railroad ties in a high-temperature combustion chamber such as a boiler, kiln, or power plant.

The high heat and the extreme temperatures burn off the hazardous material contained in the railroad ties, such as creosote.

Make sure you remove all nails, screws, metal pieces, and other non-wood elements from the railroad ties before burning them, whether they are treated or untreated.

How to Reuse Railroad Ties

Often, disposing of materials is not the right solution at all. This is especially true when the materials can easily be reused!

Below are two ways in which you can reuse railroad ties instead of disposing of them:

1) You Can Burn Railroad Ties as a Biomass Fuel Source

Hence, railroad ties can be burned in biomass power plants and turned into fuel. This fuel material can then be shipped to different regions across the U.S. and even internationally!

If you have a large number of railroad ties and don’t know what to do with them, consider taking them over to a biomass fuel-producing plant.

If you don’t know of any plant in your area, asking local waste collection and landfill authorities can help.

Railroad ties can be used primarily for business or home landscaping projects.

They can also be used to landscape timbers and retain walls. By reusing railroad ties in this manner, you can ensure that they do not end up burnt or in landfills.

Here is a lesser-known fact for you: In U.S, every year, around 21 million railroad ties are driven out of their facility. What happens to these ties after that?

Most of the used railroad ties, which are around 30 years old on average, are burnt to generate electricity and heat.

Some are also disposed of in landfills. The remaining railroad ties that still have potential are converted to landscaping timbers and used in several landscaping projects.

However, the low cost of natural gas and the ever-changing environmental rules on burning and reusing the chemically treated railroad ties have caused an increase in the number of railroad ties being landfilled.

In 2017, a wood-preservative company called Nisus Corp. worked with a group of researchers from Tennessee to develop a commercial scale thermochemical process.

This process aimed to increase the value of used railroad ties and reduce the environmental impact of disposing of them.

The thermochemical process involves chipping railroad ties and heating the wooden material to extract creosote and other preservatives usually added to railroad ties to keep fungus away.

Then, the cleaned-up wood can be burned in a boiler for fuel. It can also be processed further to create a bio-oil. Bio-oil can then be converted to diesel fuel, gasoline, and several other chemicals.

In this process, the leftover solid material is known as biochar. Biochar can be added to farmland to improve soil quality and sequester carbon or burned like coal.

The recovered creosote and preservatives from this process can then be reused to prepare new railroad ties.

This approach makes efficient use of old railroad ties from an economic as well as environmental perspective.

Are you now clear on how to dispose of railroad ties? We certainly hope so!

The first thing you need to do is classify whether your railroad ties are treated or untreated.

Then, connect with your local landfill authorities and see if you can deposit your railroad ties over at their premises.

If you feel that your railroad ties can be reused or recycled, do not dispose of them. Use the guidelines mentioned in this blog to restore them and create a positive environmental impact. 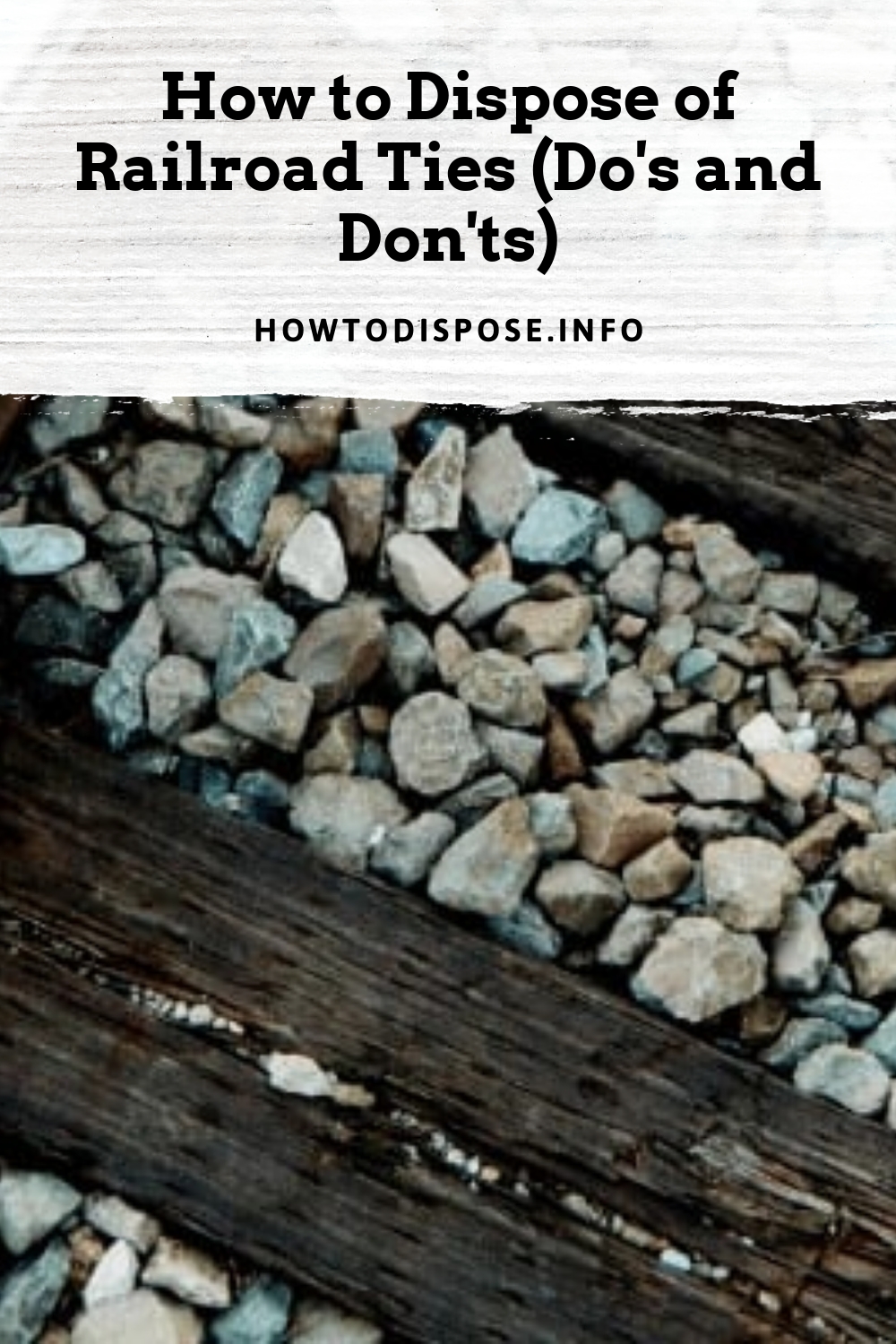