Recycling should be mandatory because it reduces the amount of trash that ends up in landfills, conserves raw materials, cuts pollution, and saves wildlife, among many others.

With the increasing awareness of climate change, more and more people are beginning to realize the significance of recycling and how it can help the environment.

Yet some remain ignorant and question the efficacy of recycling and why it should be compulsory.

With that in mind, this article discusses seven reasons why recycling should be mandatory.

Recycling Diverts Trash Away From Landfills

Landfill sites pose a massive problem for the nearby communities and the environment.

The waste generated in households and industries has to be disposed of somewhere. Due to this, it is dumped in large stretches of land in two ways.

It is either piled above the ground or buried under the soil. Either way, the waste that ends up in landfills irreversibly damages Mother Nature.

Firstly, the waste dumped in landfills contains harmful compounds and toxins that seep into the ground, ruining soil fertility.

Moreover, when the contaminants reach under the ground, they mix with groundwater, resulting in poor drinking water quality in close-by areas.

On top of that, the toxins released from landfills mix with rainwater, producing a highly toxic liquid compound, leachate.

Leachate gets absorbed into the loam, rendering the land infertile and contaminating the groundwater tables.

Simply put, the toxic elements from landfills, such as mercury, arsenic, lead, etc., compromise the quality of natural resources.

As a result, life around dumpsites is impacted. But that’s not all.

Another side effect of the increasing volumes of landfills globally is the production of greenhouse gases.

Typically, when a landfill is at capacity, it is covered with soil. In simple terms, trash is buried under the ground.

This confinement of some particular waste materials, primarily organic items from settlements, spurs anaerobic (without oxygen) breakdown of particles.

When said process occurs, methane gas is released, which is much more harmful to the atmosphere than carbon dioxide.

Moreover, it is highly flammable. This means if a landfill site is exposed to even the tiniest spark, it will catch fire and damage the air quality.

The harmful side effects of landfills mentioned above are enough to conclude that these trash-dumping sites are incredibly bad for the environment.

But the good news is that we can reduce the amount of waste sent to landfills by recycling.

With recycling, the volume of garbage will automatically come down, eliminating the need to dump it anywhere. But for that to happen, waste must be recycled on a large scale.

And that’s only possible if recycling becomes mandatory from a grassroots level, which will eventually result in mass recycling.

However, unfortunately, there is still a long way to go before recycling becomes a norm across the board.

Sourcing raw materials is a difficult task that comes with a significantly high price. On top of that, if the raw materials are non-renewable, the earth’s natural resources are depleted.

For instance, plastic production requires petroleum and oil, which cannot be reused once exhausted.

Similarly, paper making necessitates deforestation, clearing thick forests for timber. These are just two examples; there are many more products that use non-renewable resources.

The resulting rapid depletion of natural resources is undoubtedly alarming and must be stopped. That is where mandating recycling can make a difference.

Recycling allows humans to conserve nature by using already existing materials for manufacturing new products. So, it’s safe to say that recycling is an effective solution to save draining natural resources.

Energy consumption is an integral part of any and all manufacturing processes.

Industries use a ton of energy to make products because making items from scratch requires refining and preparing raw materials.

Raw materials have to go through many extensive procedures in order to acquire a state suitable for manufacturing products. So, naturally, an incredibly high amount of joules are exhausted in the process.

Add the energy required to actually make the intended item; the total volume will be mind-bogglingly high. But it doesn’t have to be this way.

If recycling is made mandatory and old raw materials are reused, they will not have to go through refining plants to be ready for further processing.

That will automatically save a considerable amount of energy. That’s not all.

Acquiring resources for production purposes is also a rather energy-intensive procedure. So, every time an industry obtains fresh raw materials, it exhausts excessive energy units.

On the contrary, if recycled items are utilized, industries will not have to source fresh raw materials.

Water pollution due to trash from landfills is a big problem. The waste from dumpsites washes away by rainwater and enters the ocean, contaminating the water.

The contaminated water is then consumed by the fish, which then die because they ingest pollutants present in the ocean.

Studies reveal that 79% of plastics produced end up in landfills, from where they are carried into the nearby water bodies.

Each year 18 million pounds of plastic make its way to the ocean. Eventually, this plastic is consumed by marine animals, killing them.

A report released by UNESCO revealed that 1 million seabirds lose their life to plastic every year. As the poor species plunge deep into the water to find food, they swallow pollutants and die.

Besides the consumption of plastic, entanglement in plastic products is another cause of the death of marine life. According to WWF, 1000 turtles get entangled in plastic and suffocate to death yearly.

Long story short, the ocean is becoming more and more polluted with every passing day due to the trash dumped on land that goes into the water eventually. A viable solution to this problem is recycling.

Naturally, when products are recycled, they don’t need to be dumped, which means they don’t wind up in water bodies. As a result, marine mammals and animals get to live longer.

As mentioned earlier, recycling enables industries to utilize old resources to make new products, which saves energy. But it’s not the only thing that is saved.

With fewer processes to run to treat raw materials, again and again, factories and plants can cut back their costs significantly.

On top of that, when the demand for raw materials goes down, their prices are also reassessed and reduced more often than not.

This means when a business does need to purchase virgin resources, it will not have to spend thick wads of cash.

What’s more is that interestingly enough, recycling is relatively cheaper to do than disposing of garbage, at least in America.

All-in-all recycling is incredibly cost-effective. If it becomes compulsory, industries and businesses will be able to reduce their variable costs.

Since recycling is a business, it requires plants and factories set up to recycle products. This means if recycling becomes more common, new facilities will be needed to meet the increasing demands.

When that happens, naturally, personnel will be needed to run the new setups, creating job openings for people all over the world.

According to a study, More Jobs, Less Pollution, if the national recycling rate becomes 75%, approximately 2.3 million employment opportunities will open up by 2030.

Furthermore, it is worth noticing that recycling creates a minimum of 9 times and a maximum of 30 times more jobs than garbage dumping, landfilling, and incineration.

Research conducted by the US Recycling Economic Information (REI) reported that the solid waste management industry employs 0.25 million people in the US.

On the contrary, the recycling sector employs 1.25 million workers.

All the statistics mentioned above are sufficient to conclude that recycling offers a significant number of job opportunities. Therefore, making recycling compulsory is an intelligent choice.

It’s a known fact that carbon in the atmosphere leads to various problems, such as acid rain, faster melting of polar caps, etc.

Typically the waste that is not recycled is either incinerated or left to decompose. Either way, carbon is released into the environment.

Recycling is undoubtedly one of the most beneficial practices we can adopt for a sustainable environment.

Mandating it will be a smart approach to controlling the issues arising from disposing of garbage. 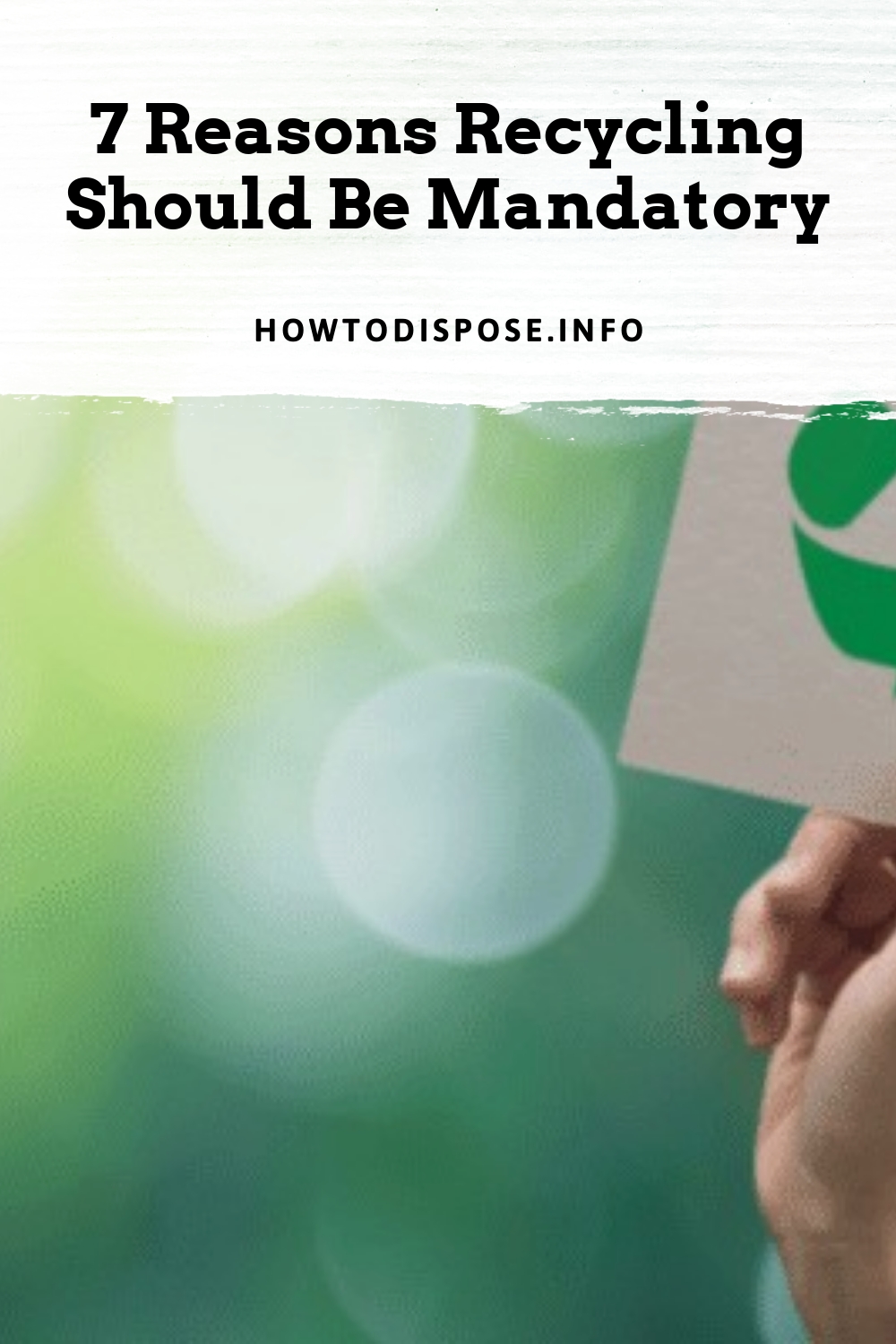