Agar powder is an ingredient derived from marine red algae. It is typically used in food preparation or science experiments.

Disposing of agar powder is not straightforward. You have to follow a specific method of disposing of it.

Otherwise, you can consider reusing agar powder for other methods.

What is Agar Powder?

Before discussing its disposal techniques, let’s also look at what agar powder is. The substance is popularly used in cooking as a substitute for gelatin.

However, agar powder can also be used in other substances to thicken them. For example, they are typically used in cosmetics, such as lipsticks.

Agar powder is often considered a vegan gelling alternative. The substance can easily be substituted for beef gelatin in cooking.

You can thicken various dishes by adding this agar powder. It is derived from a type of seaweed known as red algae.

The red algae are grown in parts of Asia and California specifically. While agar powder has many uses, most people normally incorporate it into their cooking.

Agar itself is odorless and has no taste. Apart from this, agar powder is also used primarily in laboratories as a culture medium.

Here, it is used to grow various microorganisms like fungi and bacteria. This is also where agar disposal is most specifically needed.

When agar powder is used in laboratories, proper care is required to dispose of the Petri dishes they were used in. This is because the mixed agar powder can be dangerous and toxic.

Take proper care and follow all lab guidelines on disposal in such a case. You should consider all agar powder to be a biohazardous waste.

And so, you must follow all safety procedures with agar powder used in laboratories. Here is a more detailed look at disposing of agar powder.

How to Dispose of Agar Powder?

Agar powder is predominantly used either for cooking or scientific experiments. Based on its usage, you can determine the appropriate disposal method.

There are two main ways to dispose of agar powder if you cannot reuse it. Keep reading to find out what they are.

Laboratories tend to use agar powder to mix with other substances to grow bacteria or fungi. Once experiments have been completed, you will need to dispose of the agar appropriately.

Plain agar powder itself is not dangerous at all. However, if you have mixed any other additives, it becomes potentially harmful.

You can dispose of agar powder in the trash can like you usually do. However, if you mix it with other additives, some disposal procedures are to follow.

Hence before disposing of the agar powder petri dish, determine what else was used. Other potentially harmful chemicals may have been used, such as blood.

During laboratory experiments, agar powder may also have been mixed with antibiotics and pesticides. If such a substance comes into human or animal contact, it can be detrimental to health.

Hazardous and toxic waste is often discarded through these bags. The color and label on these indicate that the substances inside are unsafe.

Don’t forget to seal this bag. Use a tie or rubber band to ensure that it is completely closed.

You can also use tape to seal the bag. You must ensure that the substance cannot seep out from it whatever you use.

Your laboratory will also have an autoclave machine. This should be used to ensure proper disposal of the agar powder substance.

Put the bag in the autoclave to kill any of the active bacteria in it. Then, you can easily dispose of it.

When you use agar powder in laboratories, it is simply not enough to dispose of the agar powder and substance. You must also securely sterilize the Petri dishes they were mixed in.

Even after washing these dishes, there is a slight chance that the bacteria remain on them. Hence, you should properly sterilize it.

You can wash and add these Petri dishes in the autoclave as well if the settings allow. This is the best way to clean off the agar powder.

If not, then there are other methods of sterilizing it. To sterilize, you must gather all the Petri dishes and other objects that came into contact with the agar powder.

Then submerge them in a bleach solution. Bleach is not as good as an autoclave because it does not guarantee killing all of the bacteria.

If you have not used some agar powder and want to keep it, follow a simple procedure. Just scrape off the agar powder from the dish and into a plastic bag.

You can also store the agar powder in a glass jar and seal it with a lid. Then, wash the dish thoroughly.

There is also another way to store unused agar powder. Melt it over a heat source to turn it into liquid form.

Then pour it into storage containers, glass, or plates for later use.

It should be noted that you must not dispose of melted agar improperly. For example, avoid pouring it down the drain.

Doing so can clog the drain since it will solidify later on. Simply follow the same procedure of disposal that we mentioned earlier.

Pour the melted agar into a bag and seal it. Then throw this bag in the trash, recycle center, or waste management center.

The most popular use of agar powder is in cooking. This is why you might have likely used it as a thickener.

You likely have to mix it with a liquid to thicken it to use agar powder. This can be for Jell-O, soup, or even water.

However, don’t pour it down the drain. Agar, in this case, will also clog the drain.

Hence, a general rule for disposing of any kind of agar powder is to never pour it down the drain. If you have agar powder, put it in a plastic bag and throw it in the trash.

Agar, when mixed with liquids, solidifies. Hence, you should keep it in a plastic bag so that it does not leak out.

Often, you don’t even need to dispose of agar powder. You can even reuse it in recipes.

Unused agar powder can be utilized in a variety of dishes. Moreover, if you mix agar powder with water, you can even use this substance.

Since agar powder is tasteless, you can use it in a variety of ways. Simply mix it with some juice and refrigerate it.

After a couple of hours, you will have fruit candies. Moreover, you can also mix it with chocolate or flavored milk and refrigerate it to get sweets.

However, these candies will not be like ice cream or ice. They will not melt at room temperature but rather stay the same.

You can also heat up some chocolate milk and mix agar powder. Then pour it into small jars.

After refrigerating, you will have a nice and tasty dessert. Additionally, you can also use agar powder to substitute for egg whites.

If a recipe calls for egg whites and you don’t have that, simply mix in some agar powder. Mix the agar powder in water and add that to the recipe as a replacement.

Some desserts call for a lot of egg whites and gelatin. If you don’t have either on hand, consider using agar powder.

Not to mention, you can even create vegan desserts with them. Gelatin and egg whites are not vegan, but agar powder certainly is.

Hence, you can make vegan pudding, fruit custards, or chocolate mousse with agar powder. Besides cooking, there are other ways to reuse agar powder.

If you have leftover agar powder, you can use it as a supplement. The substance expands in your stomach after you consume it in raw form.

Hence, it can give you the impression that your stomach is full. Therefore after consuming agar powder, you will not feel hungry.

If you want to lose weight, adding agar powder to your diet as a supplement is a good idea. Sometimes, agar powder can also be used as a laxative.

If you don’t have laxatives, consider taking a teaspoon of raw agar powder. However, check-in with your doctor before embarking on either of these ideas.

You can dispose of agar powder through various methods. If you have used it in laboratory experiments, consider following safety procedures.

If you use agar powder in cooking, don’t dispose of it through the drain. Instead, put it in plastic bags and then the trash.

If you have unused agar powder, don’t dispose of it. You can reuse it in multiple ways. 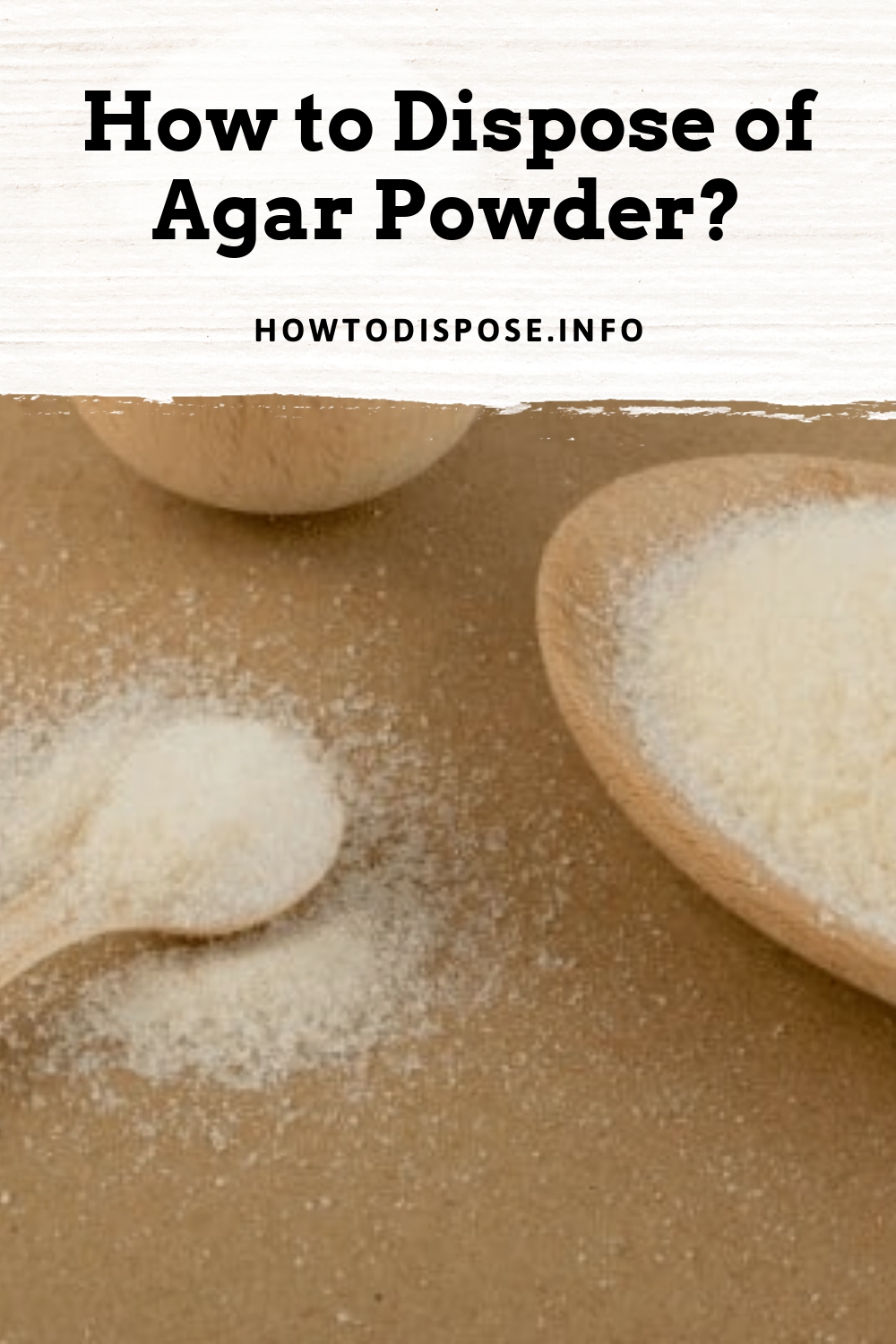