Do you still have some of that old gunpowder bought on a great deal at the gun show years ago?

Maybe your granddad handed over a few pounds of discontinued powder to you.

More often than not, people leave gunpowder lying around their garage for years, not realizing that the ‘lasts a lifetime’ promise isn’t quite accurate.

You might have completely forgotten about the old stuff, but it can be quite dangerous if it falls into the wrong hands.

To prevent misuse of your old gunpowder and ensure your family’s safety, it is best to get rid of it soon. Here’s how to dispose of gunpowder safely; let’s take a look.

How to Dispose of Gunpowder Safely

Before diving into the right techniques for the safe disposal of gunpowder, you should keep in mind that it comes in two forms.

Your gunpowder can be smokeless or black powder, and both have very different reactions. Therefore, it is important to deal with each using proper measures to ensure they don’t blow up in your hands and cause severe burns.

Here are some general ways that you can use to dispose of both powders. We have also covered more in-depth techniques for each kind of powder later on in this post.

Your local Police Department or the bomb disposal team will probably agree to take the gunpowder off your hands.

This is the safest way to get rid of any kind of gunpowder as you know its use can no longer be held against you. The bomb guys will use it for training and practices.

Reach Out to a Gun Store Nearby

Another option is to call up an ammunition store nearby and see if they know people who reload.

Usually, these people are safe gun owners, and you can even request the ammunition store to lead you to trusted individuals only.

Sell It Off Online

There will always be some gun enthusiasts residing nearby who would love to get their hands on the old gunpowder. It is a form of antique collection for them.

However, you should try to do some due diligence to ensure they won’t carry out any illegal practices or crimes using the gun powder.

Have a few conversations and see what kind of people they are beforehand.

You will also need to be careful in shipping the powder to the buyer. Most shipment companies will refuse to carry it, so try finding a buyer who lives nearby and can collect it from you easily.

If the above options don’t work out, and you need to figure out how to dispose of gunpowder yourself, you first need some more info about what you’re dealing with.

For safe disposal of smokeless or black gunpowder, you should know how their reactions differ.

Smokeless powder is a type of propellant used in firearms, while black powder is explosive.

The former produces very limited amounts of smoke, hence its name, but black gunpowder will produce enough smoke to alert the authorities and cause problems.

It is also important to keep in mind that smokeless gunpowder is almost three times more powerful than black and can cause a bigger reaction.

How to Dispose of Smokeless Gunpowder

The burning rate of smokeless gunpowder is rather high.

It increases even more when put under high pressure, and the lack of smoke released can make it hard to detect.

That is why it is always safer to dispose of any smokeless gunpowder you might have in storage. Here’s how to do it.

Since smokeless gunpowder isn’t explosive and doesn’t raise fumes, you can light it up safely in your backyard.

However, you will need to take extreme precautions to ensure you aren’t in the way and all safety protocols are met.

Always light up one pound and a time and not anymore to prevent the flames from becoming out of control.

You will also need to visit the ammunition store and buy a fuse for this process. Using a long fuse will keep you at a safe distance from the gunpowder as it burns.

There are two ways of lighting up your smokeless gunpowder.

Take the powder you wish to dispose of and pour it in a straight line on your sidewalk.

Only use a little at one time, and then using your fuse, light up the powder.

Since the smokeless powder isn’t explosive, it will slowly burn down the trail you have created. You can even use this technique to get rid of any unwanted weeds in your backyard.

Another way to light up your smokeless gunpowder is by making a small ditch in your backyard. Make it just deep enough to hold the flames and ensure that they don’t reach ground level.

You will also need to be careful not to build your ditch near any trees, as they can catch flames and result in a growing fire.

Dump one pound of powder into the ditch.

Then, go a safe distance away and light up the powder using your fuse. Repeat as many times as necessary to ensure all of the powder is disposed of.

In smaller amounts, your smokeless gunpowder can actually be used as a rather effective fertilizer.

Gunpowder has high nitrogen content, which can be really good for your plant’s growth. An eco-friendly way of disposing of your gunpowder is by lightly dusting the soil of your plans with it.

Be sure not to add too much, though, as it can blow into the air your breath and become a health hazard.

How to Dispose of Black Gunpowder

Black powder is more volatile when kept in storage; therefore, you can’t just throw it in the trash or flush it down.

Several waste facilities accept black gunpowder, so that is always a good option. However, if you want to avoid the trip, here are some easy ways to get rid of any black gunpowder.

Trade at a gun dealer

Head over to your local shooting range or gun dealer and mention to them that you have black powder to dispose of.

You can also mix the black gunpowder with some damp dirt to make it inert.

The water content of the dirt will leech away the potassium nitrate in your gunpowder due to its water solubility. So, your gunpowder loses its reactiveness.

P.S. This will also serve as a wonderful fertilizer for your backyard!

How to Know if Your Gunpowder is Still Good?

As the years pass by, your gunpowder will slowly lose its magic and reach the end of its lifecycle.

While proper storage can delay this process slightly, the expiration is only inevitable, and soon enough, your gunpowder will no longer be good to use.

It is best to say away from bad gunpowder, and you definitely shouldn’t have it lying around your property. A useful trick to tell if your gunpowder has gone bad is by doing the sniff check.

Gunpowder is generally a mixture of charcoal with potassium nitrate and a little bit of sulfur.

When it goes bad, the nitrocellulose components start to deteriorate, releasing a solvent called acetic acid. You may know acetic acid as common household vinegar – yes, they’re one and the same.

One long sniff and you will immediately detect the signature sour vinegary smell, which is indicative of gunpowder gone bad.

The color of your gunpowder can also signify if it is about to expire. As gunpowder goes bad, the individual kernels of your powder will appear in a red hue. It usually resembles rust-colored dust in your powder container.

That’s how you know it is time to follow our tips on how to dispose of gunpowder.

What Happens to Gunpowder When it Gets Wet?

Black gunpowder can be permanently ruined upon contact with water. It is made from a mixture of potassium nitrate (also called saltpeter), sulfur, and charcoal.

Since saltpeter is highly water-soluble, it will dissolve into the water and wash out completely. This renders your gunpowder useless, and you might as well dispose of it soon.

P.S. Bear in mind this only takes place when there is sufficient water exposure to the gunpowder. Simply dampening the powder with a little bit of water won’t have the same effect.

Can You Flush Gunpowder Down the Toilet?

Only in very minute amounts.

If you have a tiny bit of gunpowder spillage, you can flush it down your toilet followed by continuous water of 5-7 minutes to ensure all of the saltpeter in it washes off.

This would render the gunpowder useless and works for both black and smokeless powders.

However, if you’re planning on disposing of a pound or more of your gunpowder down the toilet, we would strongly advise you against it. Gunpowder of both types is extremely hazardous.

When flushed down your toilet, it has the potential of reaching your water supplies and pipes.

If it ends up making its way into your local water bodies, it can lead to an environmental disaster.

Moreover, if this contaminated water flows into our pipes, people will be bathing in it, cooking with it, and even drinking it! This can be a massive health risk to your entire locality.

What Causes Gunpowder to Explode?

The reason why gunpowder seems to explode is that one of its main properties is extremely rapid burning.

When gunpowder is compressed in a barrel, it is tightly packed within a small space to exert a high level of pressure on it.

Therefore, when it lights up, the fast-burning within that pressurized, confused compartment causes the gases to build up, and you have an explosion on your hands (we hope not literally!)

How to Differentiate the Smells of Good and Bad Gunpowder?

This one is rather straightforward. Good gunpowder smells like acetone, which is the scent of nail polish remover, rubbing alcohol, or furniture polish.

On the other hand, bad gunpowder has a sharp vinegary scent.

If your gunpowder has gone bad, or you simply won’t be using it, the wise decision would be to follow the abovementioned techniques on how to dispose of gunpowder ASAP.

You can light it up in small amounts, sprinkle it on your plants as a little treat, or even water it down to make it unreactive. Whatever process you choose, always make sure you follow safety precautions and keep it away from small children or pets.

In the wrong hands, your gunpowder stock could be used to cause a lot of damage and even loss of life. If you plan to hand it over to an ammunition enthusiast, make sure they are reliable and sane enough not to cause trouble.

Also, be sure to do some background checks to determine if it would be safe for them to have this gunpowder. Remember, the handover can always be traced back to you, and any crime committed could list you as a provider.

All the best, and stay safe! 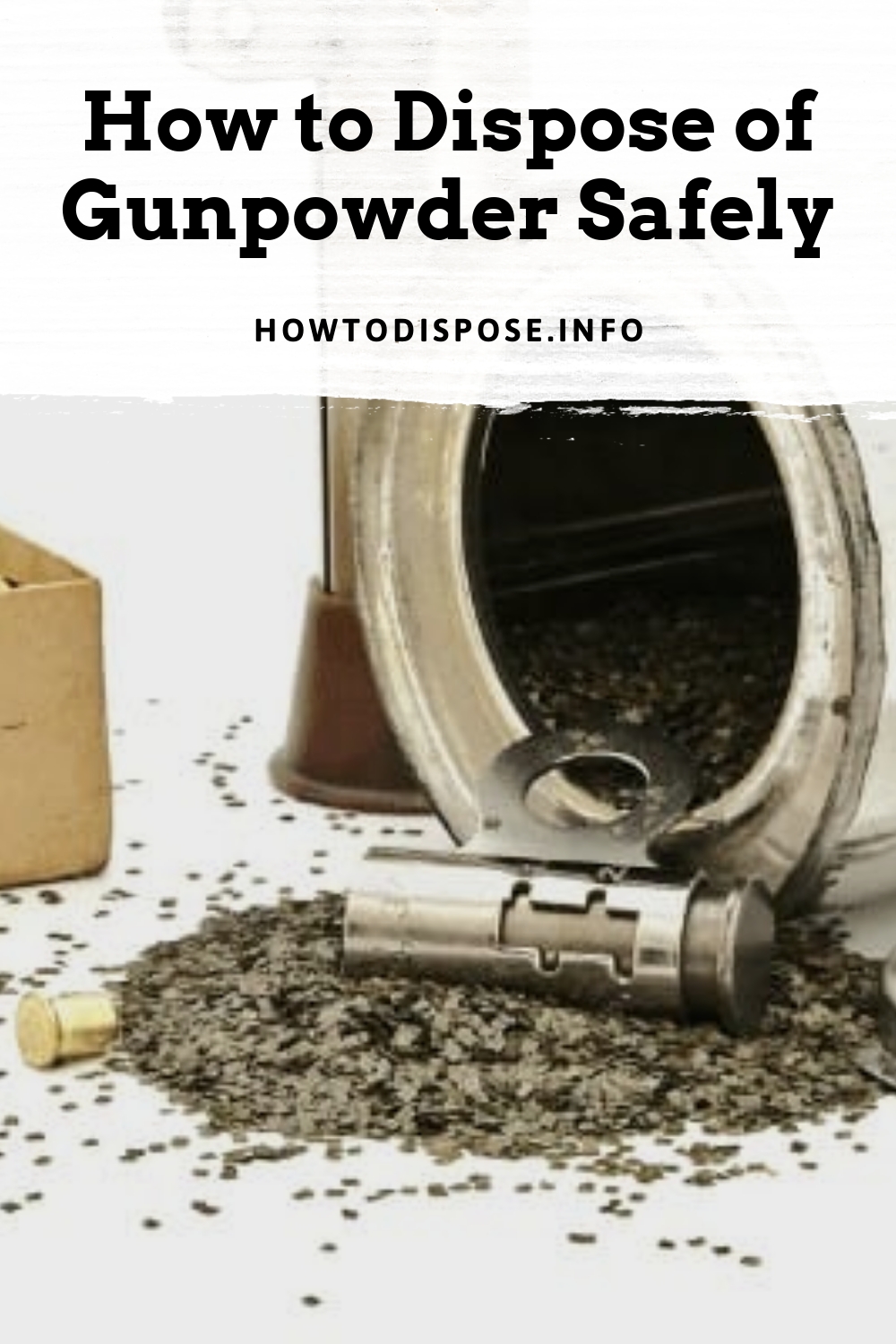