Shotguns are the third most manufactured guns in America. According to the Bureau of Alcohol, Tobacco, and Firearms, there were 935,411 shotguns made in 2014 alone.

Many Americans love having shotguns for hunting and for protection. That means that there are a whole lot of shotgun shells lying around the United States.

Some of them are brand new, but a lot of them may be very old and rusty.

Hence, when you’re done with the shells, it’s your job to dispose of them as carefully as possible. They’re not just ammunition, but also dangerous weapons that can cause harm.

Here is what you can do to safely dispose of shotgun shells that have been lying around too long.

What Is the Shelf Life of Ammunition?

Ammunition really doesn’t have an expiration date. Since it’s basically a casing made for gunpowder, it depends on the make and the model that you buy.

Remember that the ammunition shelf life is relative. Under good conditions, you can keep the same shotgun shells for decades.

You could even keep them for half-a-century if you treat them right. However, if you don’t store them properly, the shells may become rusty and moldy after a while.

The things that could spoil them include continuous contact with sunlight, heat, and moisture. The latter will rust them very quickly if kept in contact. Moreover, the water may even get inside the shell and render it ineffective.

If you want to preserve your shells for long, keep them in a dark, dry environment. If you live in a particularly humid area, you can get a dehumidifier.

Or, you could purchase specific cases that are airtight to keep the shells sealed.

It’s even built to last with exposure to sunlight, heat, and moisture, though protecting it will obviously yield better results.

Most ammo manufacturers have said that their products are good for about a decade. In reality, this is just an estimate that is conservative. Many people don’t keep their ammunition for that long anyway.

Say you found a few old shotgun shells in the attic.

Or, maybe, you received a gift from someone for a birthday or an anniversary and found the shells ‘funny looking’. In order to find out if they’ve gone bad, you have to first examine the shells.

The first thing that you have to do is carefully look at the shotgun shells for any signs for oxidation. These usually manifest themselves in two ways.

The first is discoloration and the other is corrosion. This will either mean that rusting has occurred or that the shell has lost a lot of its sheen.

The basic signs of corrosion can be found at the bottom of the shell. Any other types of damage like cracks or dents should also be examined.

If any are found, then the shell has definitely been compromised and shouldn’t be used.

Next, you should examine the box that you found the shells in. If it’s bent out of shape, it’s not a big deal.

However, if there are signs of moisture and direct evidence of being covered in water, the shells are all compromised.

Don’t take any chances with any type of ammo that has been lying in moisture for too long—ditto for any shells that have been stored in a wet place.

Third, when you’re handloading or reloading your weapon, you can figure out if a shell has gone bad. The primer may not be seated correctly and the shell may be sitting at an angle.

The crimp may also be wrong. All these signs indicate that your weapon is not in its ideal condition.

What Not to Do

For old ammunition, damaged ammunition, and soaked shells, there is one specific rule. Do not throw it in the trash.

If you find shells or rounds lying around that have clearly been damaged, don’t throw them in the garbage. Don’t even try to bury it in the ground. Some poor soul may come across it and get hurt.

Also, don’t ever soak a shell in water and oil and throw it away. This will make the cartridges extremely dangerous.

The water may render the shell inactive; the water could dry out as well. This means that the shell could become active again.

If a trash compactor picks it up, it could fire within and endanger the people and the machinery. Either way, the loss is imminent, whether that of funds or human life.

How to Recycle Shotgun Shells

Hence, you should let the professionals handle it. Here is what you need to do in order to recycle shotgun shells properly.

They have a protocol for ammunition that they find in their hauls, and they follow it to the letter. You can even find a private hazardous waste contractor to handle this for you if you like.

These are collection points that are specifically made to recycle old things like plastic or metal.

You can also use the Earth911 Recycling Locator to find a collection point. You can also check your city, country, or state website for further options.

If they don’t collect them at any specific point, you can call in and ask for further options.

A lot of points will not accept ammunition on a regular basis. They may have specific events that you can go to, to contribute.

How to Dispose of Shotgun Shells

If there aren’t enough facilities near your home to recycle them, you can always dispose of them. There are plenty of institutions near towns and even villages that have this facility.

The best way to dispose of old shells is to shoot them. Go to a gun range and simply put them out of their misery.

This is only advisable for shells that are not damaged. If you find shells that have been specifically damaged by moisture or if their integrity is damaged, don’t use them.

They’re far too risky to use, and the damage that could be incurred is not worth it.

A lot of police departments have ammunition disposal programs. You can either drop it off or have it picked up.

Be a responsible citizen and give the old shells to them so they can get rid of them properly.

The best way to do this is simply to call in. Ask if the police station takes ammunition in the first place. If they take it in small quantities and you have a few shells, go ahead.

If you have a large number of old shells, then you may have to take them somewhere else. However, call in any way to find out the options you have.

If you’re a regular visitor to a gun range or just have one nearby, this is the second most likely place to go. Most gun ranges have something called an amnesty box. This is usually reserved for duds or damaged rounds.

Gun stores also usually have a lot of ammunition. They have specific deals and protocols in place to get rid of bad ammunition.

Hence, they will have a protocol in place to get rid of bad shotgun shells. If it’s recyclable, you can even let the gun store know. They will let you know if there are any reloaders that can help you out.

If you have a hand-loader, then you can disassemble bad rounds through something called a kinetic bullet puller.

It’s a very simple tool and resembles a hammer. That’s how you use it as well. Think of it as a hammer that can break apart a single shell bit by bit.

You simply insert the bullet or the shell into the puller and hammer it on the ground. This will result in the shell coming apart.

If you’re disposing of shotgun shells, always be responsible about it. Remember, these are live ammo rounds that can hurt people severely.

Other articles you may find useful: 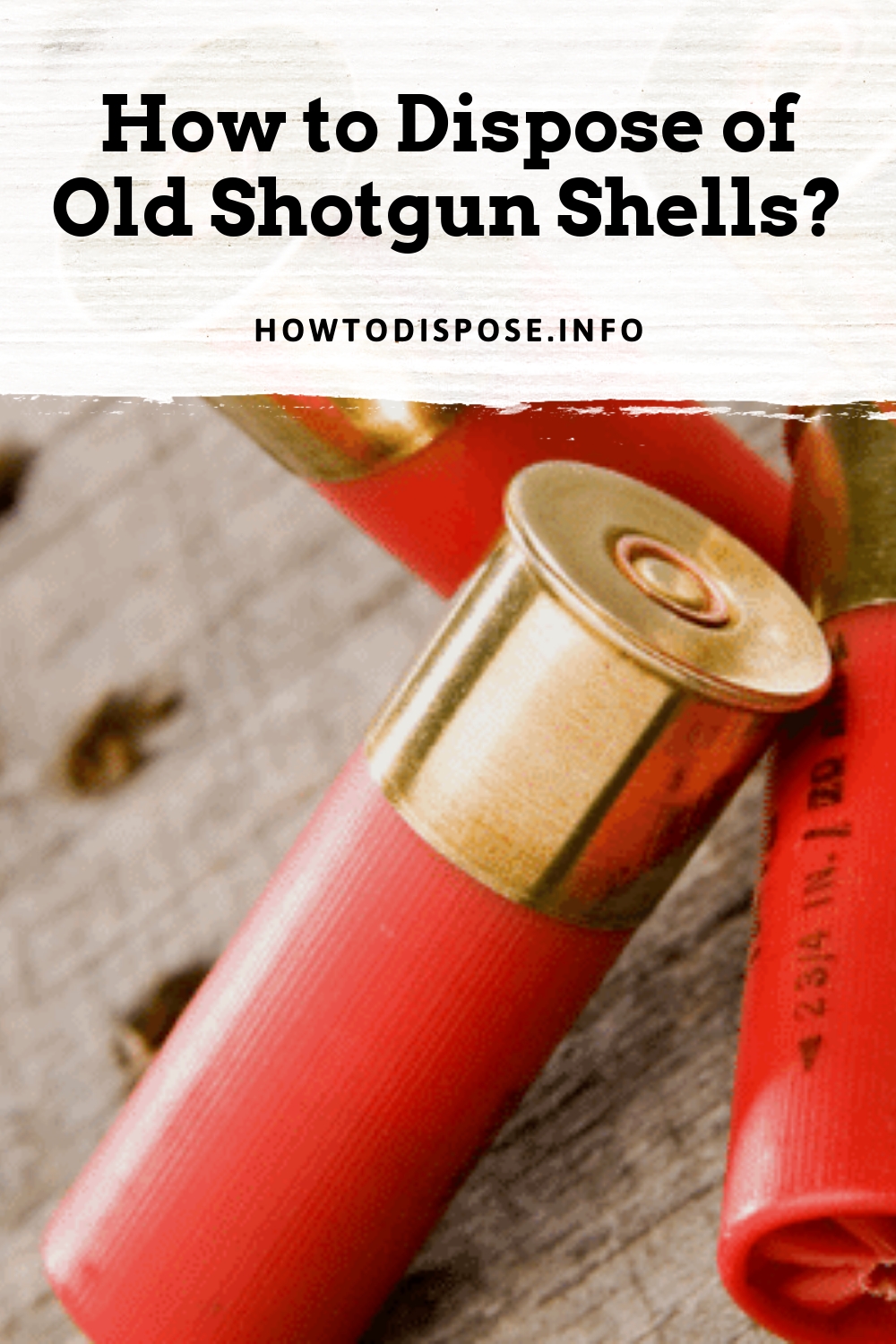