At the time I am writing this article, Halloween is just around the corner, and people have already begun carving pumpkins.

However, as much as Halloween is fun to prepare for and celebrate, it can get equally wasteful.

Over a billion pounds of pumpkins are wasted each year in the US alone, the majority of which is contributed by the Halloween trash.

The statistics become even more troublesome when you realize that most people dump the pumpkins in the trash.

In this article, I will cover some of the easy ways you can dispose of pumpkins.

Why You Shouldn’t Throw Pumpkins in Trash

It would be best not to throw pumpkins in the trash because it attracts bugs, insects, and pests and leads to mold growth.

Both the reasons can become very dangerous very quickly.

Insects are most likely to carry out this mission by looking in the nearby areas.

If you have dumped the pumpkins in the outside bin, pests can be easily directed towards your home or your neighbor’s.

While the carved pumpkins are kept clean and sprayed with insect killers, the insect killers aren’t much use once the pumpkins make their way into the trash where insects are already present.

Once they get inside your home, they can attack any food placed on the kitchen counter or make their way to the kitchen bin.

They can also move about the home, get into other rooms, and cause a pest and insect problem in your home.

If you dump the pumpkins in the kitchen bin inside the house, you will provide food for pests inside your home.

On the other hand, dumping pumpkins in the large trash bins outside the street aren’t much help either as it helps the insects make their way to your or your neighbors’ gardens.

Even if it’s too cold for insects to survive where you live, you can still provide a habitat for mold by dumping pumpkins in the trash.

Mold can also spread to other edible and non-edible objects and lead to several hygiene and health hazards.

Mold exposure can lead to mold poisoning among people, leading to flu-like symptoms that only go away once the mold is removed.

Prolonged mold exposure can also lead to dementia and breathing issues and can even prove to be fatal.

Dispose of Pumpkins by Putting it in Compost

Disposing of pumpkins by putting them in compost bins is one of the safest and most eco-friendly solutions for those living in apartments.

Since compost can be used for gardening purposes, the composted pumpkins don’t add to wasted pumpkins.

While composting pumpkins, it’s important to remove the stems attached on top and the seeds inside.

You should also compost a limited quantity of pumpkins at a time as too much pumpkin in the compost bin can make the process of composting slow.

Another one of the safest and eco-friendly options of disposing of pumpkins is by burying them.

Burying pumpkins is as safe and eco-friendly as composting them but is also much faster. It is also one of the oldest methods of getting rid of pumpkins.

If you have access to fertile or semi-fertile soil, you can dig up a single big hole in the ground and throw all the pumpkins in it.

If you have difficulty fitting the pumpkins in the hole, breaking them and stacking their pieces might save you from digging an even bigger hole in the ground.

If you cannot find space to dig a large enough hole, you can dig up smaller holes and stack pumpkin pieces inside before filling them.

The buried pumpkins will be decomposed by nature in time and add to the soil’s fertility.

The fertile soil will help plants and flowers grow in the soil.

Disposing of by Smashing Them

Many local authorities arrange for a pumpkin smash event after Halloween.

You can check in with your local authorities to find out about pumpkin smashing events in your town or even help them arrange one!

The pumpkin smashing event is a fun way to dispose of pumpkins.

You can then place the pumpkins on the ground as others would be doing, jump on the pumpkins and have some fun.

The disposal of smashed pumpkins from there will be the responsibility of the authorities who arranged the event.

You will be free to clean your shoes, get back in your car, and drive home to a pumpkin-free home!

If you haven’t sprayed your carved pumpkins with insect killers or other harmful chemicals, you can donate them to your local zoo or animal shelter.

This is another safe and eco-friendly method to dispose of unwanted pumpkins.

The shelter or zoo can use the pumpkins as fodder for animals by mixing them with other vegetables and meat.

This act will bring a lot of benefits to everyone. The shelter will be saving some food resources by using your donation.

The animals will benefit from the various vitamins and minerals found in pumpkins; your home will be free of pumpkins – a win-win for everyone!

Leave the Pumpkin for the Wildlife

You can drive up to any wildlife area near your town and leave the pumpkins out in the open.

Squirrels and other animals will happily consume the pumpkins, and you will be doing some good while getting rid of unwanted pumpkins.

While many people leave out their carved and sprayed for pumpkins for wildlife, we suggest otherwise.

Many sprays contain chemicals that can be poisonous to wildlife. You don’t want to get rid of pumpkins by putting wildlife at risk and doing the opposite of good!

Make Something Delicious from the Pumpkins

This method of disposing of pumpkins is for the leftover pumpkin bits from carving.

While you can throw the carved bits into the compost, using them as food is a better idea. You can use the carved pumpkin bits in the following ways:

What’s better in fall than a warm pumpkin broth? To prepare a pumpkin spiced broth, simply put a pot of a liter of water on the stove on medium flame.

Wash the pumpkin trimmings add them to the pot.

Add salt, pepper, a few whole cloves of garlic, and a washed and peeled slice of ginger to the pot.

Once the water reaches a boil, lower the flame and cover the pot halfway through. Let the water simmer for at least half an hour.

After half an hour, turn off the flame, cover the pot completely, and let it sit for about ten minutes.

You can choose to either strain the broth once it’s cooled or remove all the solid bits with the help of a spoon while it’s hot.

The broth can be used to make pumpkin latte, pumpkin soup, or risotto.

If you don’t like a strong pumpkin flavor, you can add onions, zucchini, carrots, and mushroom when you add the pumpkin bits to make a vegetable broth instead.

Making a puree out of carved pumpkin bits is the most useful way of disposing of them.

Homemade pumpkin puree is also a lot more flavorful than store-bought ones.

All you’ll need to do is scope the soft pumpkin flesh from the hard shell and seeds.

Toss the hard bits in the compost and prepare a baking pan by placing butter paper on it. Spread out the soft pumpkin flesh on it to the baking tray.

Season the top of the tray with salt and place the tray in a preheated oven for an hour.

Take the tray out and let it cool down slightly before removing the baked pumpkin.

You can blend the pumpkin in a food processer, blender, or large pot with a portable blender. Use it to make pumpkin bread, pumpkin soup, or pumpkin pie.

Finally, don’t forget to make the most of pumpkin seeds.

Wash and strain them before letting them air dry.

You can use the seeds for various purposes, such as planting more pumpkins, as fodder for birds, or even as a healthy snack to consume yourself. Pumpkin seeds taste amazing, topped on granola or banana bread.

Other articles you may also find useful: 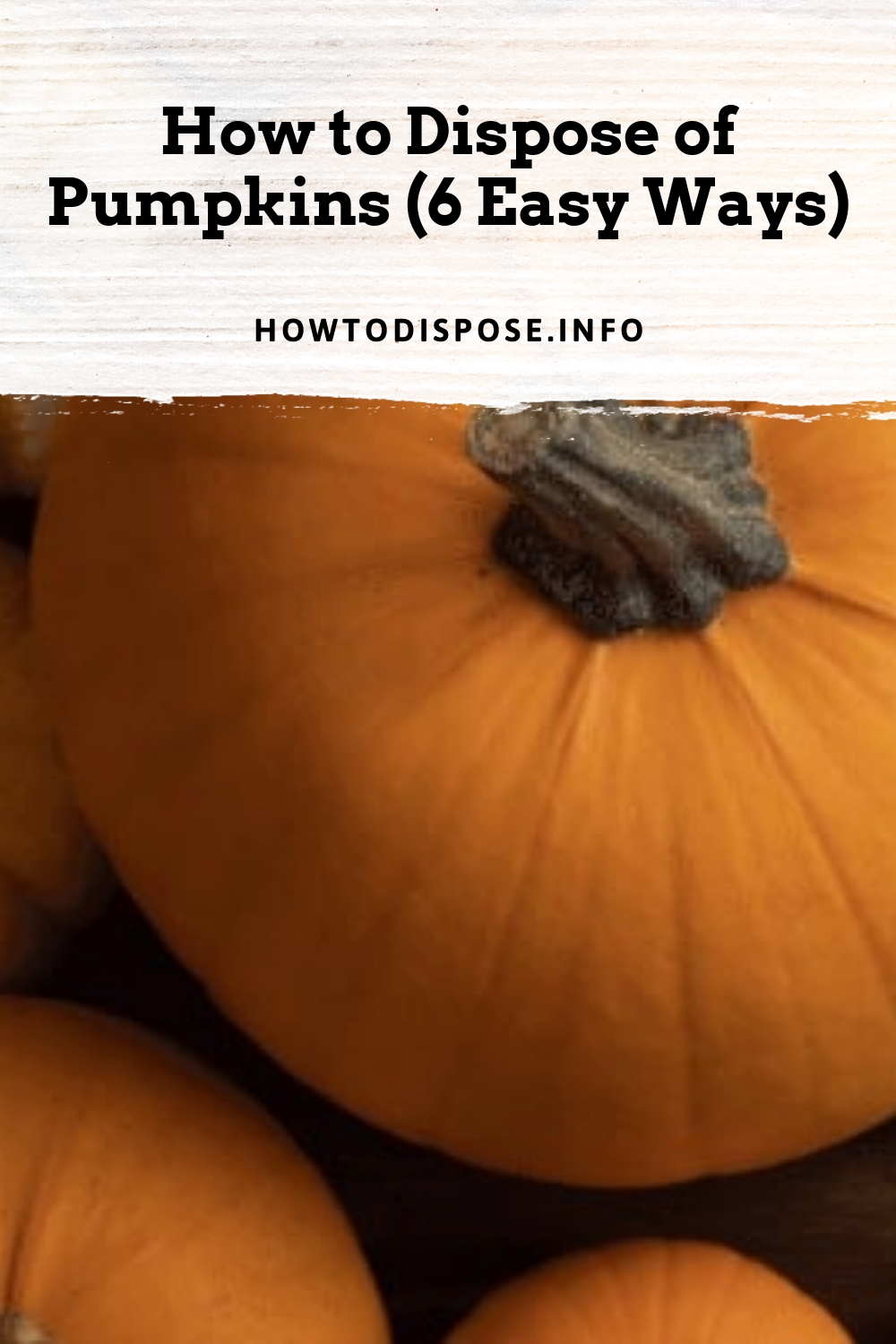