It is common to find a bottle of hydrogen peroxide in a cabinet at home.

It can act as a mild antiseptic or disinfectant.

However, it should never be inhaled or ingested. It is classified as a toxic material and can cause severe damage in high concentrations.

If you have some lying about and don’t know what to do with it, here is a guide to disposing of hydrogen peroxide.

How to Dispose of Food-Grade Hydrogen Peroxide

Food grade hydrogen peroxide is 35% concentrated. Some sellers can even sell it at lower concentrations (as low as 10%).

At 35% though, it’s very caustic and hazardous. You can’t get rid of it by throwing it down the drain. You need to dilute it with water first.

You can even use sodium sulfite to nullify its effects somewhat.

However, this is a risky method of disposing of it. If you’re not educated in the exact method of dilution, you can’t ballpark it.

It’s not just adding water; it’s also adding the right concentration of countering chemicals. This is why going to professionals for proper disposal is probably the best way to proceed.

If you have extra hydrogen peroxide that you need to get rid of you can always donate to a local lab or a school. You can also go to a chemical retailer and ask them if they can take it off your hands.

How to Dispose of Expired Hydrogen Peroxide

It’s also a flammable, reactive chemical that is depleted upon reacting with most acidic and alkaline materials.

Closed bottles of hydrogen peroxide have a shelf life of 2 to 3 years. However, if you have one that has visibly gathered dust and is not effective anymore, you should get rid of it.

To test if it has lost its effectiveness, you can pour a little into the sink or a plastic container. If no bubbles form, then the solution has lost its concentration.

To dispose of it, you can either contact your local environmental regulatory body or a laboratory. You can even dilute the chemical further and pour it down the drain.

Just make sure it wasn’t food-grade hydrogen peroxide, or else it might be a risky move.

Can You Pour Hydrogen Peroxide Down the Drain?

Hydrogen Peroxide is a hazardous chemical; hence it shouldn’t be poured down the drain.

However, in the circumstance that the H2O2 is just 3% concentrated, you can pour it down the drain. Just make sure that you dilute it further just for the sake of the environment.

You can also nullify the solution with baking soda. A good rule of thumb to remember is that it takes about 2.5 tbsp per liter to nullify hydrogen peroxide solution.

Whenever you’re handling hydrogen peroxide, of any concentration, you should be wearing the following gear:

It can irritate the body if it’s inhaled or comes in contact with the eyes. If it’s ingested it may cause serious health problems. It can be toxic in large amounts as well. Pulmonary irritation can result after the inhalation of 10% hydrogen peroxide.

If dilute hydrogen peroxide (3%) is ingested, then it can cause vomiting or mild gastrointestinal irritation or erosions.

It may even cause embolism which is the blockage of blood vessels due to air bubbles. High concentrations may cause tissues to be burned and rapid loss of consciousness.

Other exposure effects can include ulceration, perforation of the cornea, the bleaching of skin or hair, etc.

Using these tips you can dispose of hydrogen peroxide pretty easily.

Other related articles you may find useful: 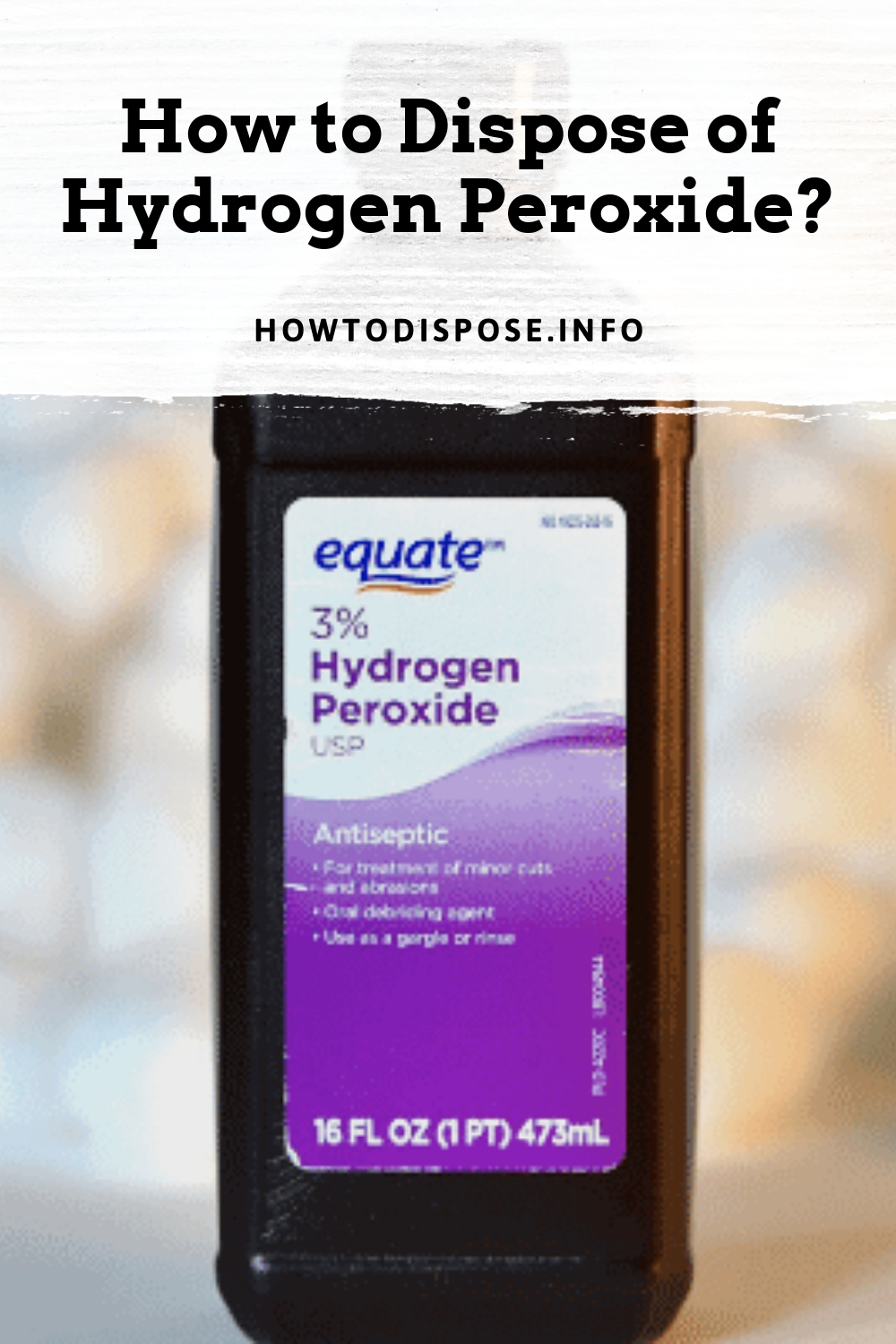