They work the same as their plastic counterparts, but they feature lots of different materials. Due to their base materials, they have a far sturdier build than the plastic ones though.

However, due to that sturdier build, it’s also very hard to dispose of these metal credit cards.

You can’t simply cut them into four pieces and throw them in the trash like the plastic ones. Burning them is also not a good idea since they’re filled with metals that may produce toxic fumes.

To dispose of metal credit cards, we have to know what they comprise and how they differ from plastic ones.

What Are Metal Credit Cards Made Of?

The trend of metal credit cards began in the US. The idea of gold, platinum, and silver cards made out of metal was very attractive. Hence, those were the metals used to make the cards.

There are also cards that are made out of customizable material. For instance, you can get cards that are made partly of metal and plastic. You can also get diamond-encrusted cards. This is the extent to which banks are willing to go to please their wealthy clients. There are even metal credit cards out there that are made from palladium.

There’s mainly an aesthetic difference between metal cards and regular plastic ones. There’s extra weight added to the card due to the materials being used. There are certain style differences in the design of a metal card. Of course, there is also that satisfying clunk you hear when you use a metal card. However, when you get down to the nitty-gritty of it all, there’s really no major difference.

Metal cards carry a certain cosmetic advantage, but they serve no practical advantage. Ultimately the chip inside the card is going to do all the heavy lifting. It’s not like the metallic nature of the card will serve a secondary purpose.

The card simply needs to be able to fit inside a card reader. It should also be easy to hold in the hand. Apart from that, the metallic finish of the card doesn’t serve any purpose.

Since you can’t cut it into four pieces with your scissors, you won’t be able to dispose of it directly. Whether you want to take the easy or the hard way out, there are lots of ways to dispose of a metal credit card.

Talk to the Company

Note that the easiest way you can dispose of a metal credit card is by sending it back to your company. Every single credit card company or bank offers a metal credit card recycling or disposal option. When it expires and you get a replacement, you can replace it safely and send the old one back.

The credit card company is fully in charge of disposing of and recycling the credit card. Many companies like American Express, VISA, and MasterCard have specific recycling programs in place. This allows the cards to be disposed of in an ethical and environmentally-friendly manner.

If you dispose of these cards yourself, they’re more likely to end up in a landfill and hurt the environment.

Use a Shredder or Heavy Duty Scissor

This is the most viable option for those who want their credit card to suffer a quick death. However, it’s not the easiest option to avail. Depending on the kind of material that your credit card is made of, it will be exceedingly difficult to break.

Using shredders or heavy-duty scissors won’t be enough in some cases. For example, if your card is made of stainless steel or brass, it may be tougher than the ones made of palladium.

You can take a shot at breaking it apart with metal shears as well.

Use a Torch or a Drill

This is the most extensive and time-consuming method. It’s also the most dangerous one. You can destroy a metal credit card by melting or burning it with a torch or breaking it with a drill. Both tactics will render it useless.

Using a drill to put a hole in the chip or magnetic strip of the credit card will render it useless. It will scramble the information within the card.

You can also use a torch to melt the card down. Notice that there is no advisory to burn your card or melt it with a match. The temperature of the flame simply won’t be high enough to do so. You need a torch that is lit with an acetylene flame.

In case you can’t send your card to the company, using a drill is the quickest and easiest option. However, depending on the material it’s made of, you’ll have to find a tough drill to break it apart.

Remember that you’re concerned with destroying the core information on the card. It doesn’t matter if you haven’t melted it down or reduced it to dust. Here are a few things to note about destroying metal credit cards.

The EMV chip contains the bulk of the information of most modern credit and debit cards. Destroying that will take care of disposal. You should use shears or scissors or even drills to break the chip. Using a pair of pliers or a pair of metal shears can also be used to destroy the chip if it’s tough.

You can even just use your thumb and try to dislocate the chip from the card’s body. Before you proceed, you should check if the card is made of a thin metal layer. If you can cut it with a shredder, do that instead.

Otherwise, when the chip is out, you should cut it up with scissors. That should take care of everything.

You can do this with a lighter. Usually, a name and number are emblazoned on a plastic layer, even on a metallic card. You can burn the names and numbers off or you can just heat them and peel the layer off.

You should use a metallic object like scissors or kitchen knives to peel off the layer after heating. Don’t use your hands or you’ll get burned.

If there are any carvings on the metal you should destroy them all. You can use knives or scissors to cut them out or even sandpaper to file them down. You can even use a file to whittle them down to their bare minimum.

This way, you’ll get rid of some unique identifiers that came with the card.

The magnetic strip is outdated but is still used in some credit cards today. It holds all the information that the ATM or the card reader needs. Hence, destroying the strip will do the trick of disposing of the metal card.

All you need to do is put a refrigerator magnet on top of the strip and leave it there. Check back after an hour. Then swipe the magnet across the strip several times. Try using it in an ATM or with a card reader now. It won’t run.

You can simply use a permanent marker to block out the signature. That way, the single most unique identifier of the card will be erased. The card won’t be acceptable as identification after that.

Disposing of metal credit cards may be extremely hard, but there are different ways to do it effectively. However, as mentioned, you should definitely make sure that you can send the card to your company first.

If you can, there’s no better way of disposing of the card. Otherwise, it’s bound to end up causing environmental problems.

You may also find the following articles useful: 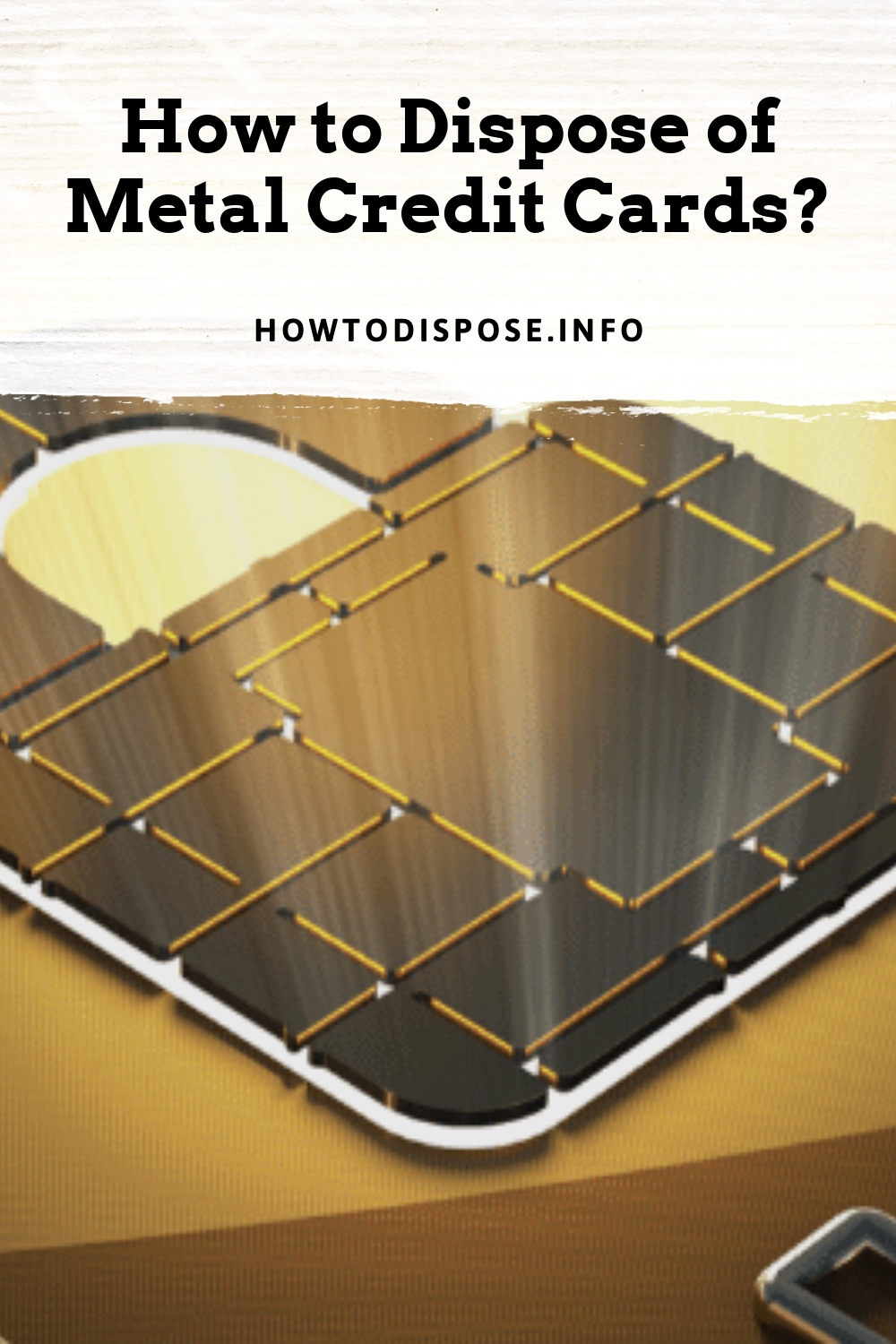