Razor blades are some of the most discarded items by both men and women throughout the entire year.

According to a study done by the National Recycling Coalition in 2011, about 2 billion are discarded each year.

While that figure has not been updated for nearly a decade, it would be safe to assume that number has risen since then.

Hence, discarding razor blades should be done responsibly in order to not hurt the environment.

It’s also important not to disregard the safety issue. Discarded razor blades could hurt people who come across them. Also, if they are used again, they could lead to illnesses.

Here are some of the best ways to discard razor blades.

For those that shave with single razor blades, this is one of the safest ways to discard them.

Take pieces of cardboard or heavy paper and wrap the individual blades with them.

You can also do this with pieces of cardstock, kraft paper, etc. Fold the paper in several times so that the entire blade is wrapped up.

There shouldn’t even be a corner or an edge peeking out. This is necessary so that neither you nor anyone else is cut while handling this.

Then you can tape the package close and make sure that it doesn’t open. You can make this doubly safe by pasting or taping a piece of cardboard to the sides of the package.

The aim here is to keep the blade out of contact with anyone else.

You don’t want to risk that it becomes loose in the trash and cuts either the garbage men or anyone else.

Then you should label the package as a used razor blade, or razor blade. Do this with a permanent marker.

Pen and pencil marks can fade too easily. Make sure that you label both sides of the package so as not to leave any room for confusion.

You can then dispose of the blade in the package in the trash. Before you do this, however, you should make sure that your state or federal regulations allow for this. You can visit the local government website or speak to an official.

You can even directly call up the government agency that deals with trash removal for their rules.

Whatever you do, don’t toss a razor blade in the trash without any padding. It can become a health hazard, a cutting hazard, and even a choking hazard at times.

They aren’t just dangerous instruments, but carriers of disease and filth.

There are plenty of things you can do to dispose of multiple blades.

The first thing you can do is to see a mailing program with the manufacturing company. Perhaps your razor company has a program that recycles or disposes of razors safely after you mail them in.

Be wary of the mailing programs that just provide you with an envelope to mail the used razors in. This is extremely unsafe. It causes a lot of injuries.

You can also lookup for safe sharps collection programs in your neighborhood or state or country. These usually give you specific instructions on how to dispose of razor blades.

These organizations don’t have to be charitable or corporate in nature.

Sometimes they can be hospitals and pharmacies and clinics. They can also be part of police stations or waste disposal stations.

All-purpose sharps containers seem to be the best way to get rid of multiple razors. A few razor blade manufacturing brands already manufacture their own.

They can fit the shape and size of their products and are hassle-free.

These usually have a small lidded opening that you can put razors in.

These containers are also labeled and red to signify their danger. The biohazard labels on them are specifically issued to them by the FDA.

If you don’t have your own sharps container, you can use items around the house as blade banks. These can include small pill containers and jars.

They have to either be made of plastic or of glass; any material that is puncture-proof basically.

Hence, you should avoid containers that are made of cardboard or of paper or cloth. You should also avoid thin plastic which can break easily.

The blades can puncture the side if you stuff too many in.

They should be sealed in a way that prevents opening and should have lidded containers. This helps when disposing of razors in the container.

Clearly label this container with a permanent marker. You can even use the biohazard labels if you want.

Dispose of in Original Packing

Many manufacturers already hand out their blades in containers. These are slim, plastic containers that the blades are fitted in.

These compartments are located at the bottom of the container usually. You can slide the razors back into the container when you’re done with them.

This will prevent them from falling out and mixing in with the trash. They will also be prevented from hurting anyone this way.

Make sure though that you’re not using mismatched razors with different packaging.

This can result in the razors coming to lose or being exposed from one side or another. That will result in injuries, or worse.

Finally, whichever container or method you use to dispose of these razors, keep them out of arm’s reach. Make sure that it’s not within the reach of children, or of anyone else for that matter.

Make sure that the container doesn’t tip over or fall. Make sure that it’s well hidden, and clearly labeled, so that if anyone finds it, they know its purpose immediately.

These are some handy tips that will help you from committing mistakes when disposing of razor blades.

Know that razor blades are too thin to recycle. It’s been proven that they’re so thin that they get stuck in the recycler.

They can destroy entire machines due to their intrusive properties. Though your heart may be in the right place, don’t give them to the recycler to deal with.

Not only is it dangerous, but it’s impractical and definitely not cost-effective.

There are even places where there is a legal penalty attached to trying to recycle razors. Tread lightly here.

Use Razor Blades for as Long as Possible

Lengthening the life of your razor blade is ecologically responsible. It’s the right thing to do in any situation.

Don’t use a new razor for every shave, unless of course, you’re talking about down under. Unless the blade has rust on it, or you cut yourself on it, it’s usable still.

Most razor blades are good for 4-5 shaves at least. Their life can also be lengthened by adopting a skincare routine.

Simply using a razor on your skin without preparation can make your skin harder.

Thus, the razors you use have to work harder to eliminate that five o’clock shadow.

If you adopt a routine of washing your face with face wash and using moisturizer, your skin will thank you. It will also soften your facial hair and eliminate zits, pimples, and blemishes on your face.

This will help to increase the longevity of your razor’s life. It will bump up against obstacles much less than normal.

Hence its edge will stay sharper and work better for longer.

You can also wipe your blade in the opposite direction of the shave with a wet towel to increase its lifespan. This will realign it and remove bits of hair, water, oil, and other dirt particles.

Check with the City

If you refer to their website or call them, you will be informed of what you need to do to dispose of razor blades.

They are pretty sure to have laws on the books to not only dispose of them but catch razor blades in the trash.

This will not only give you a permanent solution to the constant need to dispose of razors but give you relief.

It’ll be easier and more automatic to dispose of your razor blades than before.

Just remember to be a responsible citizen when disposing of your razor blades. You probably use dozens every year, no matter if you’re female or male. Hence, it’s your duty to minimize the impact on the environment.

Learn more about conservation, and implement a routine so that you can do this every month.

Not only will the environment thank you for it, but you will also thank yourself many years down the line.

You may also find the following articles useful: 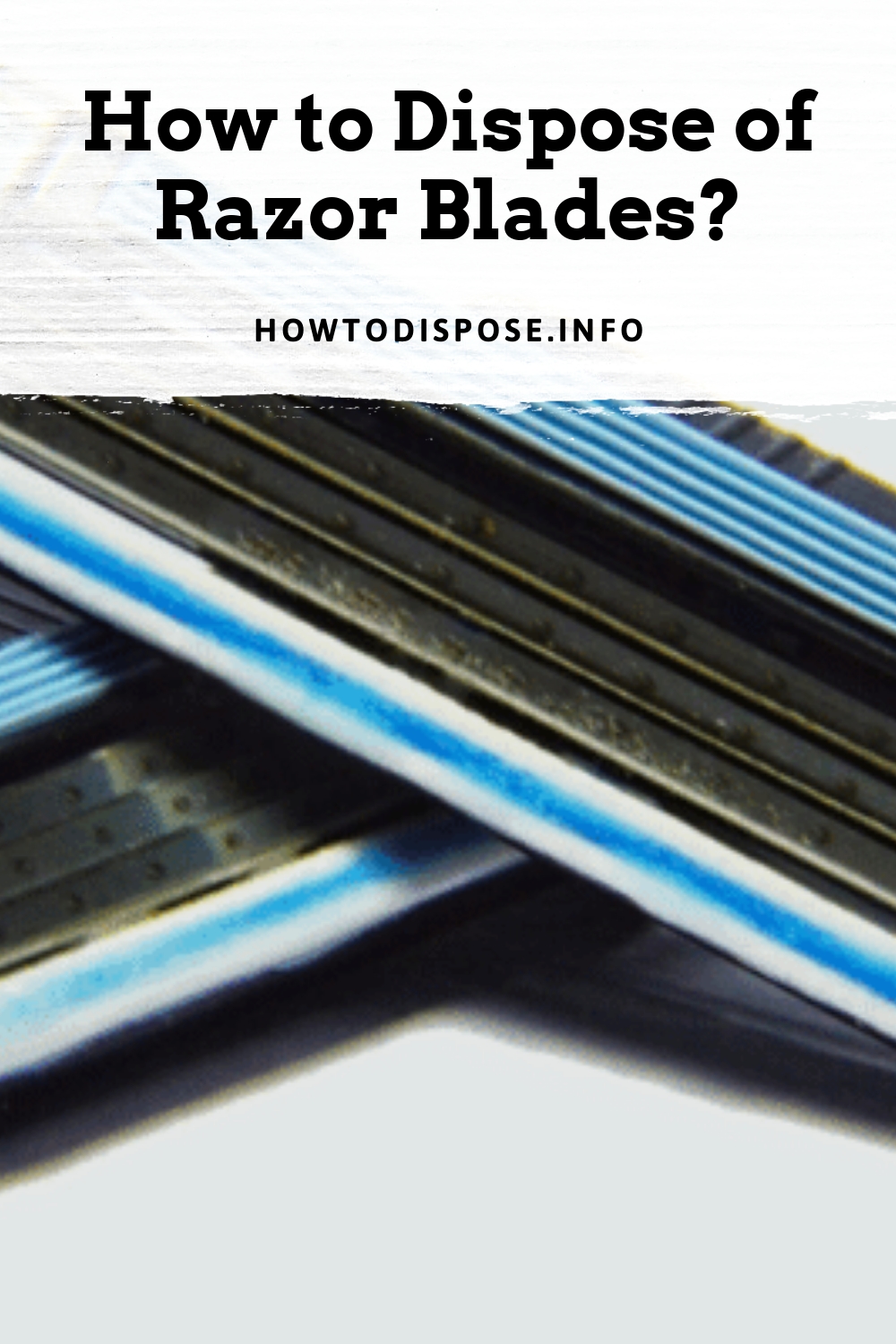