As important as they are, oxygen tanks can take up quite a bit of space. Moreover, since they contain compressed oxygen, they can be dangerous as well.

Therefore, you have to be careful when handling them, specifically when disposing of them. Here’s how you can dispose of oxygen tanks.

How to Dispose of Oxygen Tanks

Disposing of oxygen tanks can be confusing. Some companies consider them hazardous and hence follow a very complex disposal procedure.

On the other hand, some companies just consider the tanks as scrap metal, in which case they simply go to a junkyard.

If you want to dispose of oxygen tanks, the best option is to contact your local garbage collection center or municipality office and inquire about the right procedure regarding the disposal of oxygen tanks.

While the oxygen tank itself does not contain any hazardous materials, compressed oxygen can be dangerous.

It is considered a hazardous material by the U.S. Department of Transportation. Therefore, the first step to dispose of your oxygen tank is to completely empty it out.

Once you have let all the oxygen out, sometimes, you might be required to remove the valve or regulator. After that, the oxygen tank is ready for disposal.

This depends on which state you are in, but usually, you can’t just keep an oxygen tank outside by the curb.

You might have to take the oxygen tank to the garbage collection unit yourself and drop it off there.

If you do want pickup services from your house, you might have to pay an additional fee for it and arrange a suitable pickup time.

Besides that, you can also contact the manufacturer of the tank or the company you bought or rented the tank from.

Sometimes, such companies do take returns and handle the disposal themselves.

Another option is to recycle the oxygen tanks. Oxygen tanks are usually made up of metal, which can be melted and reused elsewhere.

Therefore, you can consider taking them to a recycling center. But before that, you must determine which metal your oxygen tank is made out of.

Usually, oxygen tanks are made of stainless steel or aluminum. You can check which material your oxygen tank is made out of using a simple magnet.

A magnet will stick to stainless steel and fall off aluminum.

Therefore, if your magnet sticks to the oxygen tank, it’s made out of stainless steel.

Otherwise, it’s made out of aluminum.

It’s important to determine this beforehand as any recycling center you contact may ask about the material of the oxygen tank and then inform you whether they will take that particular oxygen tank or not.

If they don’t recycle that particular metal and therefore, can’t take your oxygen tank, you can ask them to recommend any other recycling centers nearby which will take the oxygen tank.

Again, you must ensure the tank is entirely empty, and there’s no oxygen left inside before it goes for recycling.

In most cases, you can probably reuse the oxygen tanks and don’t need to throw them out.

Oxygen tanks can be easily refilled, so you don’t need multiple tanks at a time. You can simply get each tank refilled with oxygen as they become empty.

Wherever you buy or rent the oxygen tank from, you can take your empty oxygen tank back there and get it refilled again.

Sometimes, some companies can also come to your house and refill the tank then and there.

You can also go to the nearest oxygen refilling center and get your tanks refilled there in case you don’t remember where you got them from originally.

As long as the oxygen tanks are not damaged, they can last for years.

However, they do need to go through periodic testing to make sure they are supplying oxygen efficiently.

Therefore, if you have had the oxygen tanks for a while, consider getting them tested before refiling them for future use.

You can also consider donating the oxygen tanks to various charitable organizations, medical practices, nursing homes, and other similar places.

Oxygen tanks can be considered a kind of medical equipment that can be used for various purposes.

Before you donate the oxygen tanks, make sure they are in excellent condition and in good working order.

As mentioned earlier, you can get the oxygen tanks tested to ensure they are working efficiently.

Once you are sure they are in good condition, you can start thinking about where you want to donate the oxygen tanks.

You can choose to donate the oxygen tanks across borders in case there’s someplace that has suffered a natural disaster. In such situations, oxygen tanks are always needed.

For instance, you can give away the oxygen tanks to fire stations as people often need oxygen urgently after escaping a fire.

Similarly, you can donate at veterinary clinics to help vets administer oxygen to sick pets and animals.

Other than that, you can also give away the oxygen tanks at charitable organizations such as Goodwill.

Whichever charity you choose, make sure the organization is legitimate. You can also get a receipt against your donation to help with your taxes.

There is also the option of selling the oxygen tanks online. If you are in need of some cash, the oxygen tanks can help your financial situation as they usually fetch a good price. You can put up an ad on platforms, such as Craigslist or Facebook Marketplace.

The interested buyers can contact you, and you can negotiate the price accordingly. Sometimes, even certain charities and nonprofit organizations are willing to pay for oxygen tanks.

Therefore, when you go to donate them, you can ask if they will pay anything for it.

When it comes to oxygen tanks, people are often scared the tanks will explode.

While the chances of an oxygen tank exploding are quite low, this does not mean that there’s nothing to be worried about or that you can use them carelessly.

Therefore, follow these safety tips when using oxygen tanks to avoid any accidents and injuries:

The high level of oxygen in the air makes it much easier for things to catch fire.

Therefore, avoid smoking to prevent any fires. Similarly, don’t light any kind of fire near it, be it from a cigarette or a scented candle.

Stay Away from Open Flames and Heating Sources

Keep the oxygen tank away from open flames and heating sources.

This includes stovetops, heaters, fireplaces, and other kinds of open flames.

Using oxygen tanks near such places can increase the chances of the fire spreading.

Avoid Using Flammable or Oil-Based Liquids Around the Oxygen Tank

You should also avoid using any flammable liquids such as cleaning fluid or paint thinner around the oxygen tank as these can worsen the situation in case of a fire.

Similarly, avoid using any oil-based products with grease or petroleum around your face.

Always keep a fire extinguisher nearby in case of a fire. Moreover, don’t use the oxygen tanks for any purpose other than their intended one.

Try to keep the oxygen tanks in an upright position or attach them to another object to prevent them from toppling over and sustaining damage.

As long as the oxygen tanks are not damaged and are in good working condition, consider utilizing them else how rather than just throwing them away.

Even if you don’t need them anymore, they can help save someone else’s life, so think about donating them to charitable organizations near you.

Most importantly, always be responsible when disposing of oxygen tanks and avoid simply leaving them by the road. 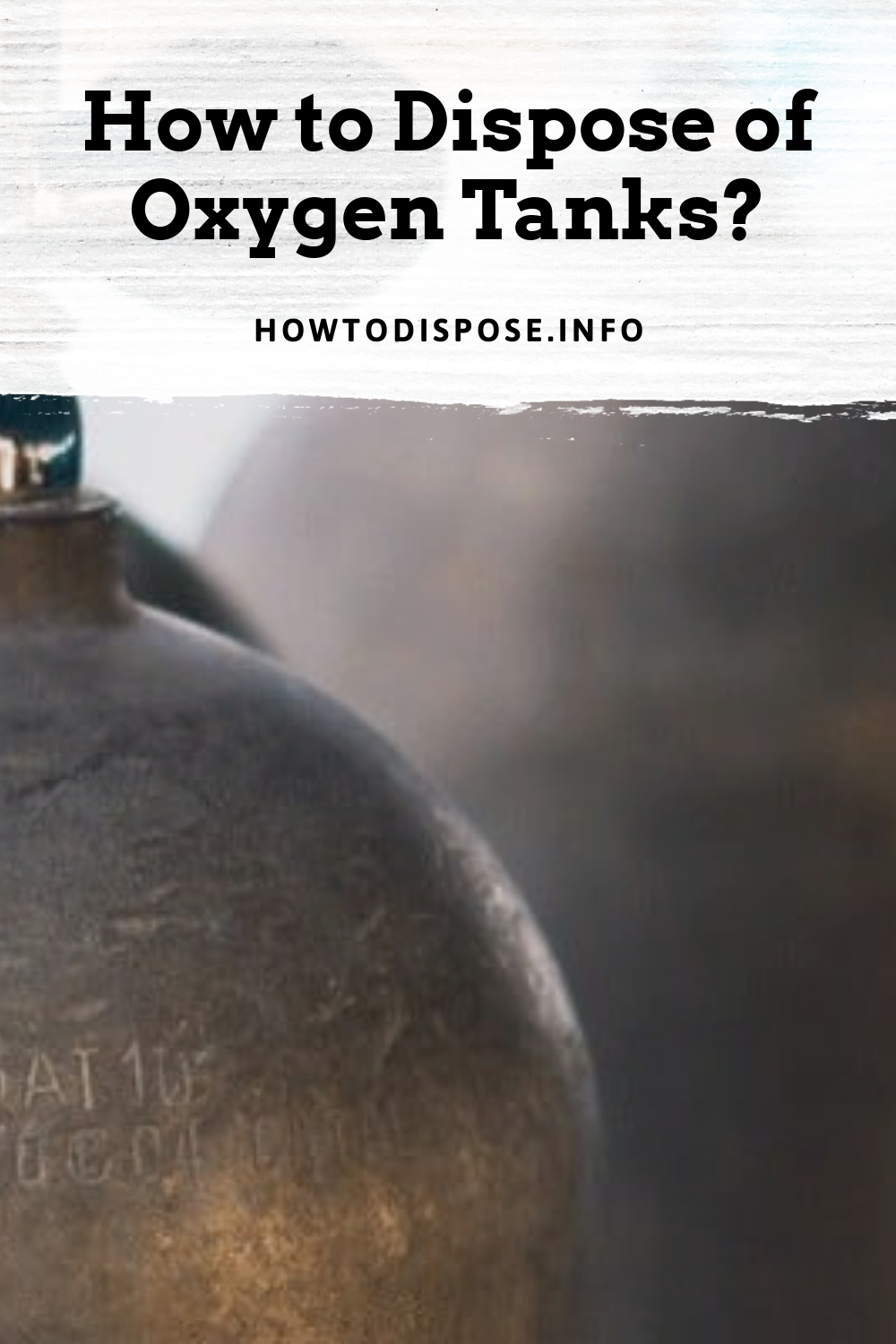