If you have an expired passport, you should dispose of it properly. Don’t simply throw it in the trash.

Instead, destroy it entirely so that no personal data can be read or stolen.

Destroying a passport requires some tools, including scissors and a paper shredder.

The guide below explains how to dispose of old passports safely.

How to Get Rid of Old Passports in Five Steps

Your passport contains sensitive data, such as your date of birth. It would help if you never threw a passport in the trash, where it can get stolen.

Confirm the Document Is Expired

Before destroying any critical document like a passport, make sure it’s defunct. In the United States, passports are valid for ten years.

You can find the information you need on the first inside page of the passport. You should see the date the passport was issued and its expiry date.

If the expiry date has passed, the passport is no longer valid. It’s then safe to destroy it. Go on to the next step to get started.

Cut Out the Photo

Every passport has a biometric photo. You don’t want someone to get their hands on this photo. They could use it to forge documents using your likeness.

Use scissors to cut out the biometric passport photo. You will need sharp scissors since passport pages are laminated.

Once the photo has been removed, cut it into small pieces with scissors. You can then throw these bits away.

Your passport has multiple pages with stamps and visas for your journeys. Tear out these pages one by one using your hands.

Then, feed them to a paper shredder.

Feed the pages one by one to avoid clogging the shredder.

Most modern shredders have a motion-activated sensor and will switch on immediately.

Confirm the Shredder Has Done Its Job

Don’t just leave the passport shreds in the shredder bin. This is especially important if you are using a public shredder at a copy shop.

Open the bin and make sure the paper is shredded correctly.

It would be best if you shredded to the point that a person can’t reassemble it.

Throw Away the Remains

Once you’re done shredding the pages, throw away the bits of paper. Ideally, dispose of them in different garbage bags.

If they’re in one bin, they can be found and pieced together.

Another option is to burn the passport. This is also a possibility if you don’t own or have access to a shredder.

If you decide to burn your passport, make sure to follow fire safety best practices. Further, double-check to see if the passport is entirely burned at the end.

Why You Should Not Just Throw Away an Old Passport

The above steps may seem tedious and time-consuming. Are you tempted to toss your old passport into the garbage?

Bad idea! Here’s why you shouldn’t throw it in the trash.

Your passport contains sensitive information. It includes details like your full legal name and your date of birth. The passport also has a photo of you.

Unfortunately, this data can be used by thieves who want to commit identity fraud. Identity theft is a huge issue and can have serious repercussions.

For example, if someone steals your identity, they can use it to open bank accounts and credit cards.

If they then don’t pay those credit cards off, your credit score will suffer.

Your passport also has a copy of your signature, alongside your full name. This is likewise a sensitive piece of data.

You don’t want people to know what your signature looks like. Why not?

A person can use your signature to forge documents, like contracts and leases. Again, this can backfire and negatively impact you.

Say a person leases a car in your name and then crashes the vehicle. Unfortunately, you may be the person who is held accountable!

This can create a massive headache. While you can go to the police, it takes time for them to catch the forgers. Sometimes, they are never caught.

Even if these things don’t happen, you probably want to protect your personal information.

You don’t want details like your birthday and your photo accessible to the general public. You should protect such sensitive information.

For example, take your birthday. Some people use their birthdays for pin codes or passwords. If someone knows your birthday, they might then guess a private password.

Why It’s Worth Keeping an Old Passport

The above tips are all about how to dispose of an old passport. However, you may want to consider keeping your old passport. Why?

Some people keep old passports for sentimental reasons. If you travel a lot, you may have stamps and visas in your passport. These can make for an excellent travel record.

There is also a practical benefit to keeping an old passport. It can serve as a record of citizenship. Some countries, including the United States, accept this.

Note that the passport must be undamaged to serve as proof of citizenship. Make sure to keep the old passport in a safe place.

Ideally, store the passport in a fire-proof and water-proof safe.

The safe will protect it against blazes and floods. It will also be safe against potential thieves.

Getting a passport renewed can take months. In light of COVID-19, a backlog of such administrative paperwork has built up.

While it’s possible to request expedited passport renewal services, they are costly. It’s thus advisable to instead update your passport promptly.

Procedures for getting a new passport vary between countries.

The State Department is responsible in the U.S. If you have a passport from another country, check with them.

Never dispose of an old passport until you have a new one in hand. You may need to submit your old passport to get the new one temporarily.

The above guide has covered a great deal of information. Are you still confused as to how to dispose of old passports?

We’ve boiled the highlights down into an easy FAQ.

How Can I Dispose of Old Passports?

It would help if you disposed of old passports so that they are obliterated. This means no identifying information is legible.

This will help to protect you against identity theft and forgery.

To dispose of an old passport, first cut out the biometric photo. Then, cut it into small pieces. Next, tear out the passport pages.

Shred each page thoroughly so that no information is readable.

Can I Throw an Old Passport in the Garbage?

It would help if you never threw an old passport in the garbage. Criminals may be able to get it from the trash.

They can then use the information in the passport for forgery or identity theft.

Instead of putting passports into the trash, destroy them entirely. Cut out the biometric photo and cut it into small pieces.

Next, tear out the pages and shred them thoroughly.

Should I Keep an Old Passport?

Some people prefer to eradicate their old passports. Others like to keep their passports. The stamps and visas can be a memento of old travels.

Some countries also accept an old passport as proof of citizenship.

If you lose your existing, current passport, this can be useful.

Can I Recycle an Old Passport?

Your passport may have some pages made of paper. For this reason, you may think it’s okay to recycle your passport.

Think again! It would be best if you never recycled an old passport.

If you recycle a passport, a thief can get it from the recycling bin. Instead, destroy your passport. Why?

Your passport contains sensitive data like your signature and birthday. It also has a picture of you.

Criminals can use this data for identity theft or forgery.

When Should I Do With an Expired Passport?

If your passport has expired, make sure to get a new one as soon as possible. Ideally, you will get a new passport one year before the old one expires.

Once you have your new passport, you can get rid of the expired one. Make sure to eradicate it.

Alternatively, you can save it as proof of citizenship. Store it in a secure place.

You should never throw an old passport into the garbage. Criminals may find it and use it for nefarious purposes.

For example, you might be the victim of identity theft or forgery.

This guide explains how to dispose of old passports safely and securely. To get the job done, you will need scissors and a paper shredder.

You must destroy every page and photo.

Before disposing of a passport, you should make sure to get a new one. Further, you might consider keeping your passport.

Some countries accept an old passport as proof of citizenship.

Whatever you decide to do, be smart. Follow best practices for how to dispose of old passports to protect yourself. 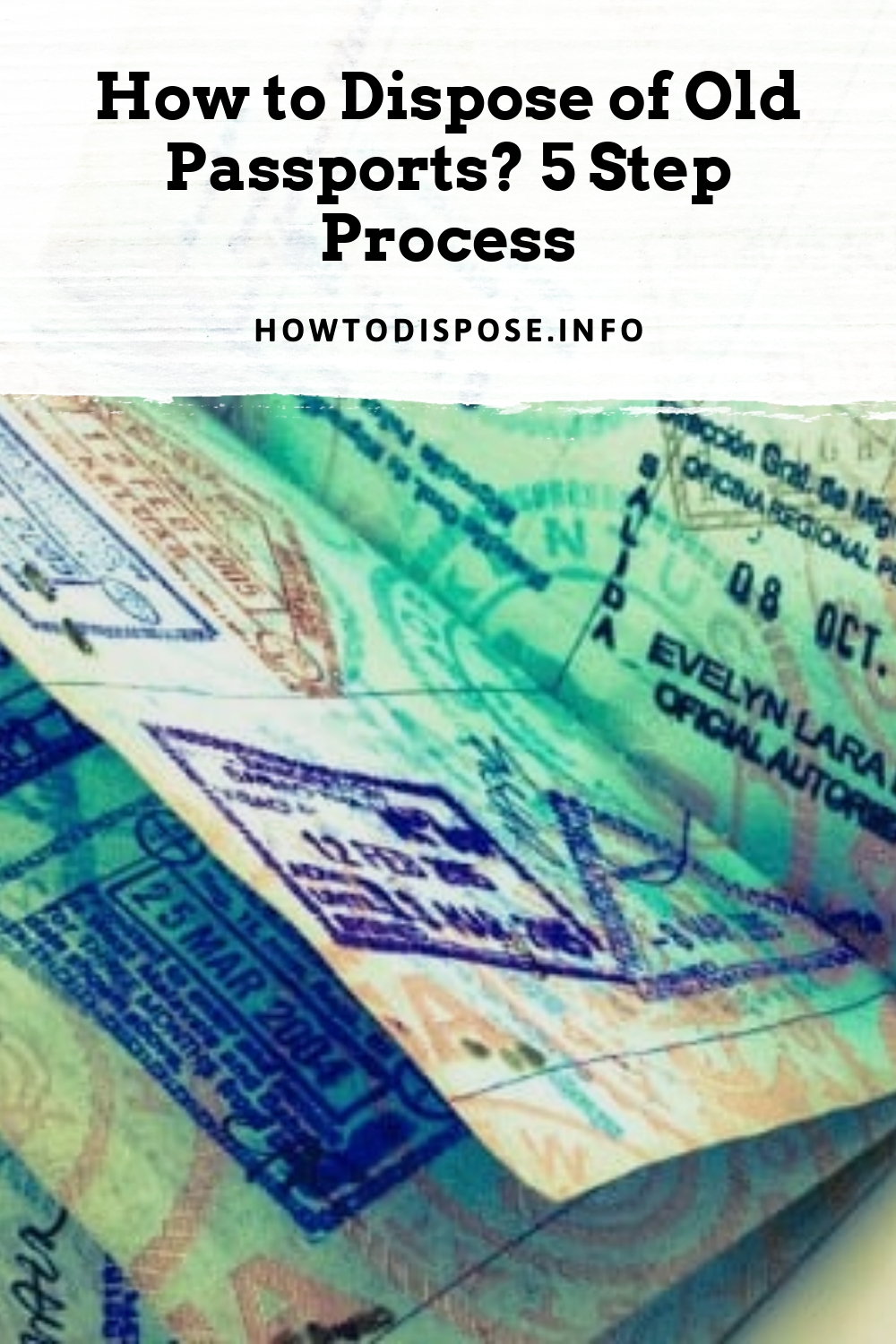