September is just around the corner, so if you have a pine tree in your yard, you’re in for a cleanup.

With other leaves, such as maple or dogwood, all you need to do is rake up the leaves and let them compost.

Why is it Difficult to Dispose of Pine Needles?

Pine trees are evergreen trees, meaning they don’t lose their leaves in the winter like deciduous trees.

Although they don’t lose all of their leaves at once, that doesn’t mean they’re shed-free.

At the end of every summer and continuing into the late fall, pine trees shed their old and dying needles so new ones can grow in their place. When this happens, cleaning them up can be a pain.

Pine needles have a unique shape compared to other leaves. Instead of having a body, pine needles have the shape of tiny needles. They are often less than an inch long and very thin.

Unlike usual leaves, you can’t rake pine needles with a standard rake. The needles are too small for the rake’s teeth to grab on and drag them into a pile.

Once you collect all the needles, finding a place to put them can be a hassle. Although pine needles decompose, it happens at a much slower rate than with other leaves.

How to Dispose of Pine Needles After Collection

Now that you’ve collected all the pine needles from your lawn, all you need to do is figure out how to dispose of them.

There are two primary ways to dispose of pine needles. You can compost them at home, or you can bring them to a green waste disposal site if your county has one for you to use.

There are a few other methods that work, but they require more supervision. You can mulch them in a specific part of your yard. Another of the more popular methods is burning the dead pine needles.

All you need for this method is a compost bin at your home.

You don’t want to add pin needles to a bare compost bin, though. They often take longer than other plant products to break down, so we recommend adding them to an already working compost bin.

To compost pine needles, add them directly to the compost bin. Within three months, the pine needles will break down enough for usable compost.

Some people think pine needles will make their compost so acidic that they can’t use it for fertilizer.

This common myth has been debunked many times. Pine needles immediately begin losing their acidity when they fall off the tree, so you shouldn’t worry about ruining your compost.

Aside from composting pine needles, the other primary method is to dispose of them at a green waste disposal site in your area.

Green waste disposal sites are usually run by the county or municipality they reside in. They take all green waste products and responsibly dispose of them.

Green waste refers to any plant, tree, or grass trimmings you may have. If you don’t know of any green waste disposal sites near you, consult this map.

Since you already collected the pin needles, you can transfer them into your car. Once you arrive at the green waste site, the operators will direct you to the proper disposal site.

From there, just drop the pine needles in their designated zone. It’s that easy!

Unlike grass clippings, which are usually left on your lawn to mulch, you just removed the pine needles from your lawn. So how do you mulch pine needles that you already removed?

Once the pine needles have dried out, you can start spreading them wherever you need mulch.

You shouldn’t mulch pine needles on your grass, though. They are still pointy and are an overall nuisance to walk over.

Instead, you should use pine needles for mulch on your flower beds or in your garden. They offer numerous nutrients to the soil as they decompose.

You might think spreading too many needles may cause a barrier for the soil to absorb rainwater.

Pine needles are too thin and don’t compress when they decompose, so you don’t need to worry about them trapping water.

The best way to use pine needles for mulch is to spread a layer on your flower bed’s soil. After that, water and feed your plants as you normally would.

Once the needles break down in a few months, spread more along the soil to keep adding nutrients.

The final way to dispose of pine needles is also the most dangerous. Burning green waste isn’t good for the environment, but for some people, it’s their only option.

Once you collect the pine needles, transfer them to a dry, indoor space, like a garage or shed. Let the needles completely dry out for two or three weeks before burning.

The only safe way to burn any green waste is to use a burning bin. A burning bin is any metal drum or barrel that has high edges. The high edges make it unlikely anything else will catch fire.

Next, clear space away from flammable objects in your yard. That means you shouldn’t burn near trees or even on any grass. Always have a running hose nearby in case of emergency.

Put some fire starter, like newspapers, in the bottom of the bin. Then create a teepee using small and medium-sized pieces of wood. This will act as the main fuel for the fire.

Once you light your fire, you can start throwing shovels full of pine needles into the flames. Wait until the distinct popping noises of the pine needles subside before adding more needles.

Repeat this process until all of the pine needles are in the flames. Once all the needles burn, you should douse the flames with your hose to prevent any accidental fires.

There are a few steps in disposing of any lawn or tree waste, the first of which is always collection.

As we already described, raking up pine needles is next to impossible, so how do you collect them for disposal?

There are two primary methods for collecting pine needles. The first utilizes a leaf blower and a tarp, while the second uses a push-broom and a shovel.

Some people use both methods. They start by using the leaf blower on the loose needles and then use the broom to pick up the embedded needles.

Start by putting the tarp down in an area devoid of any pine needles.

You want to weigh down the tarp’s corners so it won’t blow away with any wind. You can use rocks if you don’t have anything else.

Once you set up the tarp, you can use the leaf blower on a medium setting to begin blowing the needles towards the tarp. Start furthest away from the tarp, always blowing in that direction.

Once the needles start coalescing into a pile, slowly increase the power of the leaf blower. Once you’ve cleared your lawn, the needles should be in a stack near your tarp.

You can either use a shovel or the leaf blower to move the pine needle pile onto the tarp. Once the needles are on the tarp, fold it up so that none of the needles escape.

The push-broom and shovel method uses the least amount of technology, but it also traps the highest number of pine needles. There’s no setup required for this method.

Start by choosing a side of your lawn to begin sweeping. Use the push-broom to push the needles from the starting side to the finishing side in 4-or 5-foot increments.

Be careful not to be too rough with the push-broom because you could damage your lawn. You can help prevent damage to your lawn by using a broom with soft bristles.

Repeat this process on the entirety of your lawn until you’re left with a long pile of pine needles. From here, you can shovel the needles into a wheelbarrow or any other container.

Pine needles are among the hardest green waste to clean up. Their small, pointy shapes make them difficult to collect in the first place, and disposal is no easier.

Luckily, there are many options for you if you need to dispose of pine needles. You can compost them or bring them to a green waste site for easy disposal.

If neither option is available to you, you can mulch the pine needles in your garden. Finally, if you can’t do any of that, you can burn pine needles, but be careful when doing so! 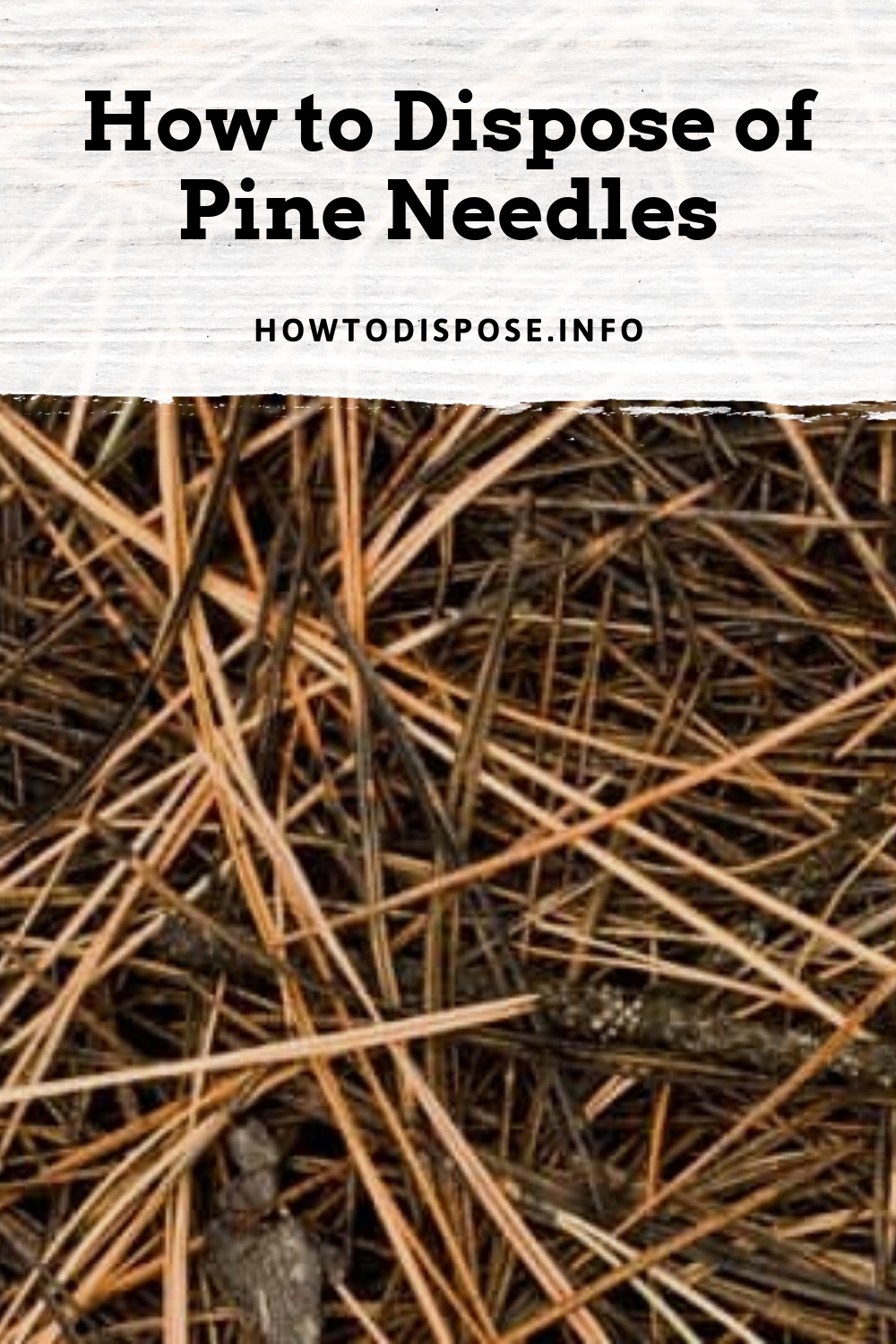