Floppy disks are pieces of outdated technology, but you can still find them in many households and businesses.

The problem with floppy disks is that their magnetic coating degrades over time and becomes unreadable by both humans and machines alike.

This degradation leaves you with a disk containing obsolete files that cannot be accessed anymore, even if you try your best at repairing them.

Luckily there are a few ways to recycle your floppy disk so that it will not go to waste.

Several recycling centers worldwide take in old floppy disks for money, environmental conservation efforts, or give them away for free, depending on their policy.

Many companies even have an online application process to accept applications from individuals who want brand new media to write data onto.

To use these services, you must send your floppy disks via postal service, as many of the sites only provide shipping information because they don’t pick up your shipment from you.

Sending your old floppy disks to recycling centers is such a good option because it certainly helps the environment.

You might even get a small reward for your floppy disks depending on where you go.

Some recycling centers even have a website or Facebook page so that you can check out their policies and how to properly prepare your floppy disks before sending them off.

Another way to recycle your floppy disks is to take them into any store that has an e-waste drop-off.

These are usually part of national recycling programs set up by companies such as Staples, Best Buy, and Office Depot.

After dropping off all your electronics for free or at a low cost, they will give you a receipt with instructions on what to do with your floppy disks.

In addition, most e-waste facilities provide instructions either online or in the store itself on how to mail your floppy disk using your shipping label.

Of course, the most important thing here is to pack it well so that it doesn’t get damaged during transport.

However, most places won’t do anything if it arrives slightly damaged because they can still use them or recycle them, even if they were severely beaten up during transit.

Creating a small craft out of your floppy disk is one way to recycle your old floppy disks instead of just throwing them in the garbage.

By turning them into crafts, you can keep their contents as a memory or as decoration. Here are some ideas to help you get started:

You can make pencil holders by using a wood base and creating grooves in the surface for holding each disk vertically (so that the label is visible).

This lets you stack them on top of each other.

The way you do this is to glue each floppy disk to the base from bottom to top so that the label is visible.

Once you’ve glued them all together, you can spray paint the entire holder with a color of your choice.

You can also make pencil holders by gluing floppy disks together until you have a large circular disk and then painting it.

These are similar to pencil holders, but they aren’t as functional.

By caving out chunks from each floppy disk, you can make a plaque hanging on the wall.

This technique allows you to store memorabilia, store flat disks vertically, or create a unique decoration out of your floppy disks.

If you have a floppy disk that contains important data, you can create a memory box or smaller decoration out of it.

You can do this by carving the label off the top and gluing it onto either wood or metal for storage purposes.

You can make a small stand for it by carving out a hole from the middle and gluing it onto an even smaller stick for decoration.

You can also use floppy disks to store small items like paper clips or push pins that you don’t want lying about your desk.

Simply create a groove in the middle of the disk and tie it onto your keychain so that you can keep your most valuable objects handy at all times.

By taking apart one or two floppy disks, you can create a card case for yourself that will be nearly indestructible.

All you need to do is cut out the metal in between each disk and then put the top and bottom halves together (with no middle section).

This way, you can keep your credit cards safe in case of theft or damage. You could also craft several smaller ones to store in your wallet if this isn’t something that interests you.

Make a stand using either a CD case or some old CDs and place your floppy disks inside for decoration.

This craft idea is especially useful if you have many disks – just make sure they don’t bend when holding anything particularly heavy because they will become unbalanced and fall over.

By placing a few disks on a keychain, you can keep them safe and close to hand for whenever you need one.

To do this, drill a hole through the entire disk and glue it onto your keyring so that they are easy to access.

Putting a key on a keychain made of one or more floppy disks reminds me of what teachers would do when I was a kid.

They would tape their keys to the wooden cabinets or big wooden blocks in school.

That way, the teachers wouldn’t lose their keys or students wouldn’t run off with them when they needed them for the restroom.

If you don’t like the sound of most of these methods, there is always the option of hanging your floppy disks up as a decoration (or using it to replace an ornament that has broken).

You can do this by creating a hole in each disk and then gluing or sewing them onto a piece of material to make a banner.

If you don’t want to hang them, you could also gather several disks and create an ornament out of them by gluing or nailing them together.

I’m sure your parents would love a floppy disk Christmas ornament to remind them of their old computer days!

You can also use old floppy disks as bookmarks in your favorite book that you’re reading.

Simply take the floppy disk, paint it whatever color makes you the happiest, and then use the bookmark to mark the pages in the book you’re reading.

One cool thing about this idea is that when you get bored with the bookmark, you can simply spray paint it a different color or put a different design on it.

Some people will change their bookmark to reflect the book that they’re reading at a particular time. With recycled floppy disks, this is super easy to do.

Before Getting Rid of Your Floppy Disk

Before getting rid of your floppy disk, remember that there is likely data still on the disk, so you’ll want to make sure you get rid of it first.

The best way to do this is to erase the disks using special software.

You can get into your computer, open up a program like “My Computer” (on Windows), and select the floppy disk option.

From there, you should see several options such as “format” (which will delete everything on the disk), “copy” (which allows you to create a file on another disk), or “properties.”

The properties tab will give you information about the size of the floppy disk, how much space it contains, and other essential details.

Once you’ve gotten rid of all data from each disk, you are free to dispose of them however you’d like.

Another way to get rid of the data on a floppy disk is to use the physical destruction method.

Simply destroy any data on your floppy disks by bending them, breaking them in half, or scratching them up to ensure everything is erased and unrecoverable.

You should also consider burning your floppy disks if you don’t want anyone to access their contents.

Finally, you could use a magnet to wipe all traces of data from your floppy disks. This is easy to do and only requires a regular magnet that you can find at any local store.

Just get one of the floppy disks and run the magnet over it several times until there are no signs of data on the disk anymore.

Floppy disks are no longer widely used, but that doesn’t mean you should just throw them away.

Instead, recycle your floppy disks or use them for other craft projects so that they can have a new life. By doing so, you’ll keep old floppy disks out of the garbage and away from landfills.

Plus, you might come up with the next floppy disk craft trend! 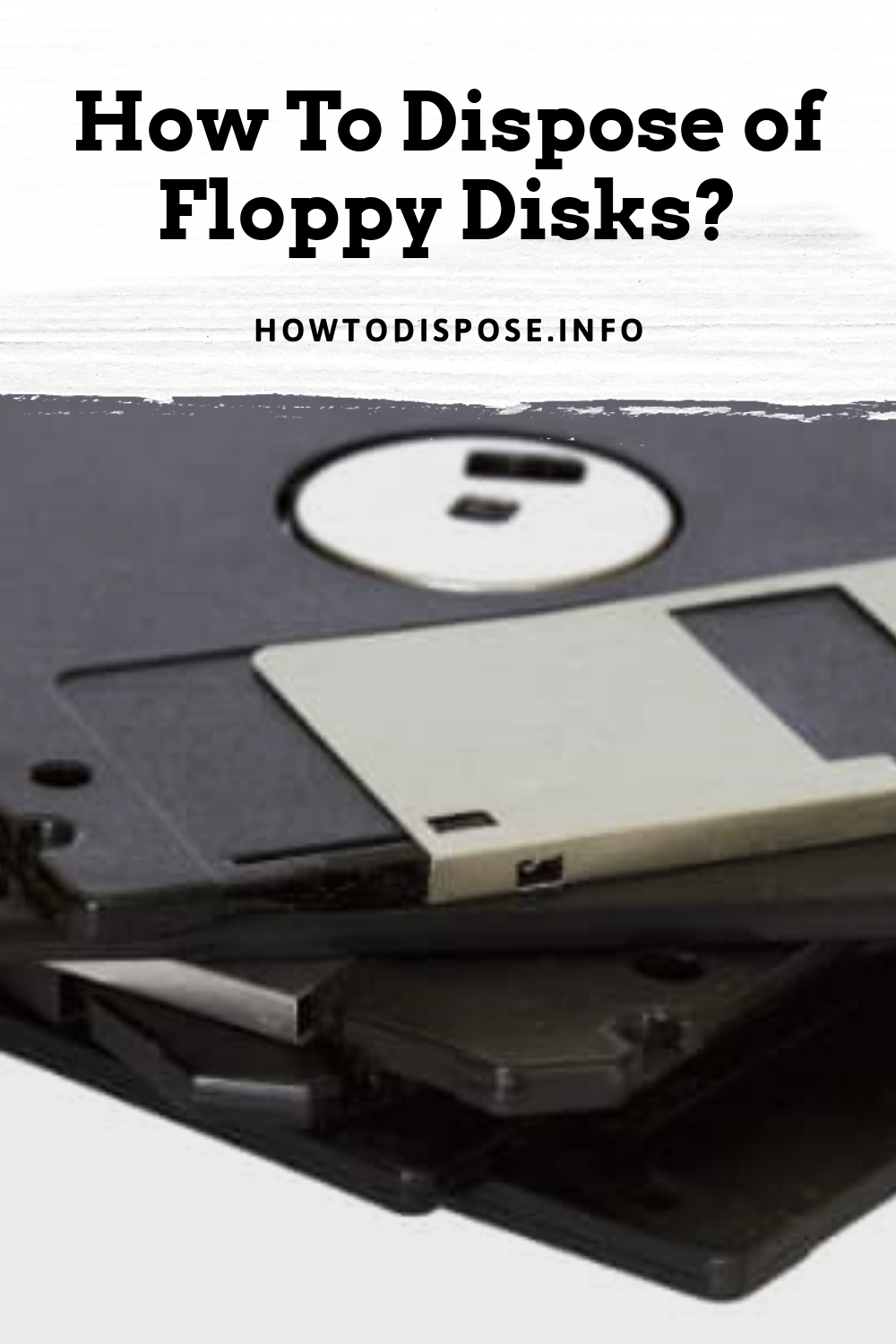